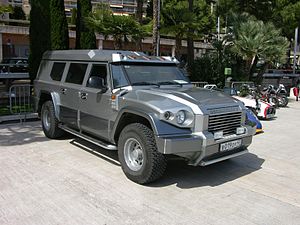 Dartz Motorz Company (Latvian: Dartz Motorz Uzņēmums; Russian: Dartz Моторз Kомпании) is a privately held Latvian-based company, subsidiary of Estonian corporation Dartz Grupa OÜ, that designs, manufactures, and sells high performance armored vehicles.[1][2][3] Having constituted itself from a renovated former Russo-Balt factory in Riga, Latvia,[4][5] the company recently attained notoriety with its current model, the Prombron, partly because it was originally available in upholstered leather made from the foreskins of whale penises.[6] The Prombron came in nine distinct models: the Iron Diamond, Iron Xtal, Monaco Red Diamond Edition, Black Dragon, Black Russian, Gold Russian, Aladeen, White Horse, and the Monako.[7] However, since September 2014 the product line consists of PrombronBlack Shark[8] and Prombron Black Snake.[9] The Prombron is then available in either the Saloon (sedan) or the Pullman (wagon), which can then be customized into a standard based, short based, or long based versions.[10] Prombrons are also available in several armoring levels, from B2 to B7, with the B7 designed to withstand attacks from rocket propelled grenades, and land mines.[11][12] In terms of performance the Prombron is equipped with an AMG V8 Engine, or an AMG V12 Engine,[8] which provides the vehicle with a healthy top speed of 250 km/h (160 mph).

In 2010, Red Sea Distribution announced that the T-98 Kombat would be available in North America for a list price starting at $225,000.[13][14] However, just two years later the T-98 Kombat was phased out, and the Prombron was released.

The Dartz Prombron Monaco Red Diamond Edition was shown at the 2010 Top Marques in Monaco,[15] with an expected price of €1,000,000 ($1.25 million), it would become the world's most expensive SUV ever sold.[16] Features included white gold - ruby embedded badges as well as a gold-plated, bullet-proof windows, an exhaust system made out of tungsten, diamond - ruby encrusted gauges, a Kevlar exterior coating, and leather made out of whale penises, although the latter was dropped.[17] The Prombron Monaco Red Diamond Edition also comes with three bottles of the world's most expensive vodka, RussoBaltique.[18]