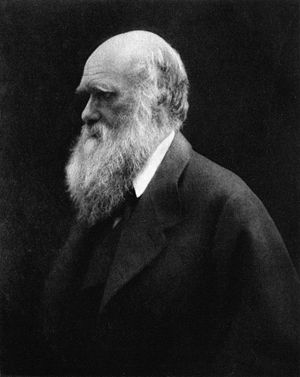 Darwinism is a theory of biological evolution developed by the English naturalist Charles Darwin and others, stating that all species of organisms arise and develop through the natural selection of small, inherited variations that increase the individual's ability to compete, survive, and reproduce. Also called Darwinian theory, it originally included the broad concepts of transmutation of species or of evolution which gained general scientific acceptance after Darwin published On the Origin of Species in 1859, including concepts which predated Darwin's theories, but subsequently referred to specific concepts of natural selection, of the Weismann barrier or in genetics of the central dogma of molecular biology.[1] Though the term usually refers strictly to biological evolution, creationists have appropriated it to refer to the origin of life, and it has even been applied to concepts of cosmic evolution, both of which have no connection to Darwin's work. It is therefore considered the belief and acceptance of Darwin's and of his predecessors' work—in place of other theories, including divine design and extraterrestrial origins.[2][3]

English biologist Thomas Henry Huxley coined the term Darwinism in April 1860.[4] It was used to describe evolutionary concepts in general, including earlier concepts published by English philosopher Herbert Spencer. Many of the proponents of Darwinism at that time, including Huxley, had reservations about the significance of natural selection, and Darwin himself gave credence to what was later called Lamarckism. The strict neo-Darwinism of German evolutionary biologist August Weismann gained few supporters in the late 19th century. During the approximate period of the 1880s to about 1920, sometimes called "the eclipse of Darwinism," scientists proposed various alternative evolutionary mechanisms which eventually proved untenable. The development of the modern evolutionary synthesis from the 1930s to the 1950s, incorporating natural selection with population genetics and Mendelian genetics, revived Darwinism in an updated form.[5]

While the term Darwinism has remained in use amongst the public when referring to modern evolutionary theory, it has increasingly been argued by science writers such as Olivia Judson and Eugenie Scott that it is an inappropriate term for modern evolutionary theory.[6][7] For example, Darwin was unfamiliar with the work of the Moravian scientist and Augustinian friar Gregor Mendel,[8] and as a result had only a vague and inaccurate understanding of heredity. He naturally had no inkling of later theoretical developments and, like Mendel himself, knew nothing of genetic drift, for example.[9][10] In the United States, creationists often use the term "Darwinism" as a pejorative term in reference to beliefs such as scientific materialism, but in the United Kingdom the term has no negative connotations, being freely used as a shorthand for the body of theory dealing with evolution, and in particular, with evolution by natural selection.[6] 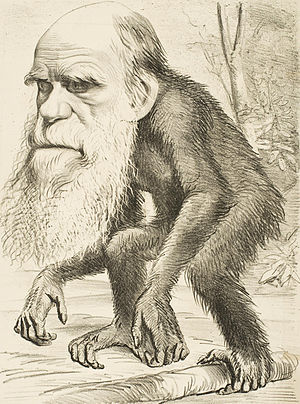 As evolution became widely accepted in the 1870s, caricatures of Charles Darwin with an ape or monkey body symbolised evolution.[11]

While the term Darwinism had been used previously to refer to the work of Erasmus Darwin in the late 18th century, the term as understood today was introduced when Charles Darwin's 1859 book On the Origin of Species was reviewed by Thomas Henry Huxley in the April 1860 issue of the Westminster Review.[12] Having hailed the book as "a veritable Whitworth gun in the armoury of liberalism" promoting scientific naturalism over theology, and praising the usefulness of Darwin's ideas while expressing professional reservations about Darwin's gradualism and doubting if it could be proved that natural selection could form new species,[13] Huxley compared Darwin's achievement to that of Nicolaus Copernicus in explaining planetary motion:

What if the orbit of Darwinism should be a little too circular? What if species should offer residual phenomena, here and there, not explicable by natural selection? Twenty years hence naturalists may be in a position to say whether this is, or is not, the case; but in either event they will owe the author of "The Origin of Species" an immense debt of gratitude.... And viewed as a whole, we do not believe that, since the publication of Von Baer's "Researches on Development," thirty years ago, any work has appeared calculated to exert so large an influence, not only on the future of Biology, but in extending the domination of Science over regions of thought into which she has, as yet, hardly penetrated.[4]

Another important evolutionary theorist of the same period was the Russian geographer and prominent anarchist Peter Kropotkin who, in his book Mutual Aid: A Factor of Evolution (1902), advocated a conception of Darwinism counter to that of Huxley. His conception was centred around what he saw as the widespread use of co-operation as a survival mechanism in human societies and animals. He used biological and sociological arguments in an attempt to show that the main factor in facilitating evolution is cooperation between individuals in free-associated societies and groups. This was in order to counteract the conception of fierce competition as the core of evolution, which provided a rationalisation for the dominant political, economic and social theories of the time; and the prevalent interpretations of Darwinism, such as those by Huxley, who is targeted as an opponent by Kropotkin. Kropotkin's conception of Darwinism could be summed up by the following quote:

In the animal world we have seen that the vast majority of species live in societies, and that they find in association the best arms for the struggle for life: understood, of course, in its wide Darwinian sense—not as a struggle for the sheer means of existence, but as a struggle against all natural conditions unfavourable to the species. The animal species, in which individual struggle has been reduced to its narrowest limits, and the practice of mutual aid has attained the greatest development, are invariably the most numerous, the most prosperous, and the most open to further progress. The mutual protection which is obtained in this case, the possibility of attaining old age and of accumulating experience, the higher intellectual development, and the further growth of sociable habits, secure the maintenance of the species, its extension, and its further progressive evolution. The unsociable species, on the contrary, are doomed to decay.[14]

"Darwinism" soon came to stand for an entire range of evolutionary (and often revolutionary) philosophies about both biology and society. One of the more prominent approaches, summed in the 1864 phrase "survival of the fittest" by Herbert Spencer, later became emblematic of Darwinism even though Spencer's own understanding of evolution (as expressed in 1857) was more similar to that of Jean-Baptiste Lamarck than to that of Darwin, and predated the publication of Darwin's theory in 1859. What is now called "Social Darwinism" was, in its day, synonymous with "Darwinism"—the application of Darwinian principles of "struggle" to society, usually in support of anti-philanthropic political agenda. Another interpretation, one notably favoured by Darwin's half-cousin Francis Galton, was that "Darwinism" implied that because natural selection was apparently no longer working on "civilized" people, it was possible for "inferior" strains of people (who would normally be filtered out of the gene pool) to overwhelm the "superior" strains, and voluntary corrective measures would be desirable—the foundation of eugenics.

In Darwin's day there was no rigid definition of the term "Darwinism," and it was used by opponents and proponents of Darwin's biological theory alike to mean whatever they wanted it to in a larger context. The ideas had international influence, and Ernst Haeckel developed what was known as Darwinismus in Germany, although, like Spencer's "evolution," Haeckel's "Darwinism" had only a rough resemblance to the theory of Charles Darwin, and was not centered on natural selection.[15] In 1886, Alfred Russel Wallace went on a lecture tour across the United States, starting in New York and going via Boston, Washington, Kansas, Iowa and Nebraska to California, lecturing on what he called "Darwinism" without any problems.[16]

In his book Darwinism (1889), Wallace had used the term pure-Darwinism which proposed a "greater efficacy" for natural selection.[17][18] George Romanes dubbed this view as "Wallaceism", noting that in contrast to Darwin, this position was advocating a "pure theory of natural selection to the exclusion of any supplementary theory."[19][20] Taking influence from Darwin, Romanes was a proponent of both natural selection and the inheritance of acquired characteristics. The latter was denied by Wallace who was a strict selectionist.[21] Romanes' definition of Darwinism conformed directly with Darwin's views and was contrasted with Wallace's definition of the term.[22]

The term Darwinism is often used in the United States by promoters of creationism, notably by leading members of the intelligent design movement, as an epithet to attack evolution as though it were an ideology (an "ism") of philosophical naturalism, or atheism.[23] For example, UC Berkeley law professor and author Phillip E. Johnson makes this accusation of atheism with reference to Charles Hodge's book What Is Darwinism? (1874).[24] However, unlike Johnson, Hodge confined the term to exclude those like American botanist Asa Gray who combined Christian faith with support for Darwin's natural selection theory, before answering the question posed in the book's title by concluding: "It is Atheism."[25][26] Creationists use the term Darwinism, often pejoratively, to imply that the theory has been held as true only by Darwin and a core group of his followers, whom they cast as dogmatic and inflexible in their belief.[27] In the 2008 documentary film Expelled: No Intelligence Allowed, which promotes intelligent design (ID), American writer and actor Ben Stein refers to scientists as Darwinists. Reviewing the film for Scientific American, John Rennie says "The term is a curious throwback, because in modern biology almost no one relies solely on Darwin's original ideas... Yet the choice of terminology isn't random: Ben Stein wants you to stop thinking of evolution as an actual science supported by verifiable facts and logical arguments and to start thinking of it as a dogmatic, atheistic ideology akin to Marxism." [28]

However, Darwinism is also used neutrally within the scientific community to distinguish the modern evolutionary synthesis, sometimes called "neo-Darwinism," from those first proposed by Darwin. Darwinism also is used neutrally by historians to differentiate his theory from other evolutionary theories current around the same period. For example, Darwinism may be used to refer to Darwin's proposed mechanism of natural selection, in comparison to more recent mechanisms such as genetic drift and gene flow. It may also refer specifically to the role of Charles Darwin as opposed to others in the history of evolutionary thought—particularly contrasting Darwin's results with those of earlier theories such as Lamarckism or later ones such as the modern evolutionary synthesis.

In political discussions in the United States, the term is mostly used by its enemies. "It's a rhetorical device to make evolution seem like a kind of faith, like 'Maoism,'" says Harvard University biologist E. O. Wilson. He adds, "Scientists don't call it 'Darwinism'."[29] In the United Kingdom the term often retains its positive sense as a reference to natural selection, and for example British ethologist and evolutionary biologist Richard Dawkins wrote in his collection of essays A Devil's Chaplain, published in 2003, that as a scientist he is a Darwinist.[30]

In his 1995 book Darwinian Fairytales, Australian philosopher David Stove[31] used the term "Darwinism" in a different sense than the above examples. Describing himself as non-religious and as accepting the concept of natural selection as a well-established fact, Stove nonetheless attacked what he described as flawed concepts proposed by some "Ultra-Darwinists." Stove alleged that by using weak or false ad hoc reasoning, these Ultra-Darwinists used evolutionary concepts to offer explanations that were not valid (e.g., Stove suggested that sociobiological explanation of altruism as an evolutionary feature was presented in such a way that the argument was effectively immune to any criticism). Philosopher Simon Blackburn wrote a rejoinder to Stove,[32] though a subsequent essay by Stove's protegee James Franklin's[33] suggested that Blackburn's response actually "confirms Stove's central thesis that Darwinism can 'explain' anything."