Das Erste ("The First"), or Erstes Deutsches Fernsehen ("First German Television"), is the principal publicly owned television channel in Germany. It is a joint production of Germany's regional public broadcasters acting through, and coordinated by, the ARD consortium. 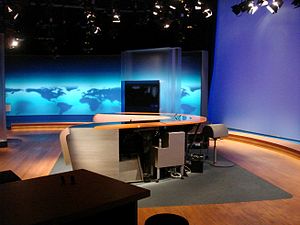 Studio of the news programme Tagesschau 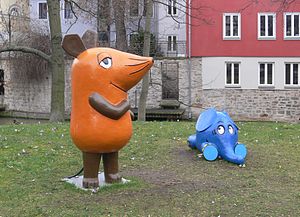 The Maus, the popular children's series

The channel's first experimental broadcast was on 27 November 1950 as the TV channel of the then NWDR, which in 1956 split into NDR and WDR. The regular NWDR television service started on 25 December 1952. Nationwide transmission began on 1 November 1954 within the ARD framework, under the name Deutsches Fernsehen ("German Television"). It was West Germany's only television channel prior to the establishment of ZDF in 1963.

The new channel consisted of jointly-produced shows such as the nightly news programme Tagesschau (on the air since 26 December 1952), as well as broadcasts produced individually by ARD member stations. The programs were coordinated by the Programmdirektion based in Munich. Besides several entertaining shows, ARD went political in 1957 when it launched its first political TV magazine, Panorama. Germany's first political TV show adopted the slogan "What is being talked about and what should be talked about" and pictured all aspects of postwar West German society—including conflict-laden topics, scandals, and other taboo topics, such as former Nazis who had held important roles.

ARD nevertheless produced a provisional second TV channel from 1 June 1961 until ZDF started its transmissions on 1 April 1963. Colour television was introduced on 25 August 1967.

The channel's name was changed to Erstes Deutsches Fernsehen ("First German Television") on 30 September 1984. Also around 1984, a new corporate design was introduced. The previous logo, with stylized waves, was replaced by a new logo showing a stylized number "1" which is still in use today. It changed its name to Das Erste in 1997, but the long name Erstes Deutsches Fernsehen is still used for some purposes (e.g. the introduction to the main editions of the Tagesschau). Informally, it is also known as ARD among viewers.

In addition to its SD broadcast, a 720p50 HD version of the channel, Das Erste HD, is also broadcast. Broadcast of Das Erste HD began in February 2010 with the coverage of the 2010 Winter Olympics in Vancouver, Canada.[2] Das Erste HD is available via satellite (DVB-S2 on Astra 19.2°E) and cable (Kabel Deutschland in Germany, Cablecom in Swtzerland).

All nine of Germany's regional public-broadcasting organizations contribute to the output of Das Erste and broadcast its programming in a common schedule.

Each regional member of ARD contributes programming to the channel's schedule in proportion to the population of the area it serves. As of February 2006, the time allocations as percentage shares of total broadcast hours were:[citation needed]

Before 1990, Das Erste was only distributed in West Germany, and was almost exclusively broadcast using transmitters owned by the Deutsche Bundespost. However, the transmitters were powerful enough that Das Erste could easily be seen in nearly all of East Germany as well. Indeed, Das Erste's broadcasts, particularly its newscasts, were far more popular in East Germany than those of state broadcaster Deutscher Fernsehfunk. Exceptions included Dresden, located in a deep valley in southeastern East Germany, and the area around Rügen. One popular nickname for ARD in East Germany was Außer Rügen und Dresden (except Rügen and Dresden).

On 15 December 1990, programming from ARD was distributed by Deutsche Post of the GDR for the first time.[citation needed] The GDR-transmitters were later taken over by the Bundespost and merged organizationally with the West German transmitters. The transmitters of the Bundespost were transferred in 1995 to Deutsche Telekom, and then in turn to T-Systems.

Between 2002 and 2008 the transmission facilities in Germany were successively converted from the analogue PAL standard to the new digital DVB-T standard.

Das Erste is available throughout Europe on free-to-air digital satellite television, as well as on many cable providers.