In linguistics, dative shift is a pattern in which the subcategorization of a verb can take on two alternating forms. In the oblique dative (OD) form, the verb takes a noun phrase (NP) and a prepositional phrase (PP), the second of which is not an argument.

In the double object construction (DOC) form the verb takes two noun phrases, both of which are arguments.

Synonyms used in the literature

Terms used in literature on dative shift can vary. The chart below provides terms used in this article in bold, along with other common synonyms used elsewhere :

Traditional grammar suggests (as a “rule of thumb”) that only single-syllable verbs can be in double object construction (DOC).[1]

These verbs must have the theta-role of recipient/goal/beneficiary in their theta grid when in DOC form. A theta grid is where theta roles are stored for a particular verb (see Section 2 on the theta role page). In example (5), the DOC form is not permitted, despite the verb root being single syllable, because wash lacks the theta-role of recipient. One explanation for why the verb lacks this theta-role is that there is no possessive relationship between the direct object and the indirect object).[1]

One lexical theory suggests the reason for this lies with the origin of the verbs that allow dative form. Generally, native verbs (Anglo-Saxon) allow dative form, whereas Latinate verbs do not. This is thought to be primarily due to the stress associated with native verbs, rather than etymological conditions.

An additional semantic component constrains some native verbs further. The double object construction requires a possessor/possessed relationship. This means the indirect object in the oblique dative construction must have the theta-role of beneficiary (PP introduced by "for") or recipient/goal (PP introduced by "to") to be a candidate for the dative alternation.[2] This theory suggests verbs chosen for double-object form are done so before syntactic processes take place. The knowledge of the relationship of possession/possessed (semantic constraint) is learned prior to the class constraint of the verbs (native vs. latinate).

Chomsky's argument suggests that a simple dative like John sent a letter to Mary derives from an underlying form.[4]Template:335

In this simple dative sentence John sent a letter to Mary, the verb, sent, and its indirect object, to Mary, make up a constituent that excludes the direct object a letter. The simple dative therefore involves an underlying verb phrase (VP) whose subject is a letter and whose object is (to) Mary. The VP sent to Mary is referred to as an inner constituent. This inner constituent is obscured as S-Structure by V Raising[4]:335

Examples (6) and (7) show dative complementation before V raising (6) and after V raising (7):

In their 1986 paper "A Note on Anaphora and Double Objects," Barss and Lasnik point out a number of asymmetries in the behavior of the two NPs in double object construction. All of their findings point to the same conclusion: in constructions involving a verb phrase of the form V-NP-NP, the first NP c-commands the second, but not vice versa. Specifically, NP1 can bind NP2, but the opposite cannot occur.[6]:347–54 The paper provides significant evidence for rejecting linear phrase structure trees (Figure 1).[6]:347

To account for oblique datives, Larson adopts a proposal originally made by Chomsky (1955/1975), where the deep structure of the dative VP is raised in the surface structure. See Figure 2. 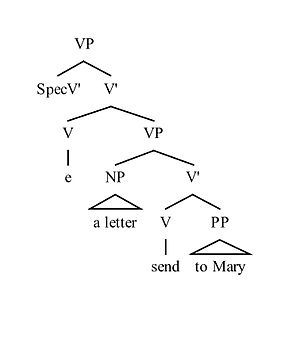 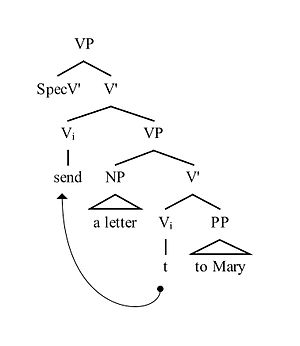 The correct ordering of the oblique dative surfaces through head to head movement. See Figure 3. The verb sendmoves to the empty V position. The verb, give, has two thematic roles that are assigned to the internal arguments: theme: a letterand goal: to Mary.[4]:340The movement leaves a traceat the original V and creates a sequence of coindexedV positions.[4]:343Raising is attributed to Case and Inflectional Agreement.[4]:343

Larson's motivations for V'Raising are the same motivations used to derive the surface order of raising in VSO languages, such as Irish. Specifically, the subject NP can receive case from the V, when V governsthe NP. Citing Chomsky (1975, 55) in the process, Larson provides an intuitive explanation of oblique datives, "to Maryforms the small predicate sent-to-Mary.This small predicateis predicated of an "inner subject" a letter,forming a clauselike VP: a letter send to Mary[4]:342 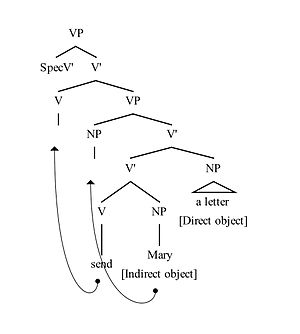 Larson states that double object constructions can be syntactically derived by a modern form of dative shift.[4]:335 He argues that properties of the double object construction structured can be explained under a derivational approach.[4]:350 and describes his challenge as one where he must bring the dative shift derivation within the scope of established theoretical principles and constrain it in appropriate ways.[4]:351

First, Larson strengthens the argument that the two NPs as in Figure 2 relate to subject and object position. He states that the governed preposition to has the status of dative case marking.[4]:351 This is similar to case marking appearing on indirect object in more highly inflected languages.[4]:351
Second, Larson extends operations that apply between subjects and objects to structures such as that in Figure 2.[4]:351 Specifically, he looks at passive formation in the inner VP.[4]:351

These two effects trigger NP Movement to subject position and the subject theta role is realized by an adjunct phrase.
Larson makes one amendment to the derivation of passives called Argument Demotion, which proposes that subject theta-role is assigned in an adjunct configuration.

Larson gives this passive operation the name "dative shift" – where NP movement promotes an argument to VP subject,[4]:352 as seen in Figure 4.

At present, there are two major classes of analyses for Dative Shift; these two classes have been called the Uniform Multiple Meaning approach (Levin, 2008) and the Single Meaning Approach (Hovav & Levin, 2008), with the former being considered the dominant approach.

In most variants of the Uniform Multiple Meaning approach (Beck & Johnson 2004,[7] Harley 2003,[8] Pinker 1989[9] ), it is assumed that the relationship between the Double Object Construction and the Oblique Dative forms is non-derivational. That is to say that the alternation arises not purely from syntactic factors, but from semantic ones as well: each variation is associated with its own meaning, and hence, each meaning has its own realization of arguments. This shows a clear departure from some of the main beliefs in Larson’s 1988 analysis.

In most realizations of this approach, the Oblique Dative form expresses caused motion (Goldberg, 1995[10] ) while the Double Object variant expresses caused possession. This can be summarized in the following table:

Contemporary theories taking the Single Meaning approach continue to consider Dative Shift with the assertion Larson’s 1988 analysis makes: that the Double Object Construction and Oblique Dative variants are associated with the same semantic meaning, but surface differently due to different argument realizations (Hovav & Levin, 2008[11] ). Variants of this approach include Jackendoff’s (1990),[12] in which he provides different analyses for verbs with different types meanings (e.g. “give” and “sell” vs “throw” and “kick”). This approach - also taken by Hovav and Levin (2008) - is also known as the Verb-Sensitive Approach.

After hearing these two forms and then being asked to produce a corresponding alternation for one of the two, children were more likely to produce the oblique dative (10) than the double object construction (11).

Although DOC and oblique dative forms are common productions for children at age three, the dative shift poses a paradox for young children learning English. The paradox, termed “Baker’s Paradox”, can be summarized in the following examples.

When children hear both forms:

Children may formulate a lexical rule, deriving the double object form from the oblique dative form. However, the rule would permit the following example of overgeneralization:

Example (13)b is an overgeneralization because they apply dative shift to the verb “donate”, however, “donate” cannot undergo dative shift.[14]:204

This hypothesis proposes that children do not overgeneralize the double object construction to verbs such as “donate” and “whisper” (ex. *John whispers Mary the secret”), because the child never hears ungrammatical double-object forms in their input. The child only recreates forms they hear in their input and does not generalize.[14]:204–205

This hypothesis proposes that children learn to constrain their rule for dative shift and are able to apply it only to monosyllabic verbs (one-syllable verbs, ex. “give”), which indicate possession changes (ex. “Mary gave John the ball”, where “give” denotes a possession change from Mary, to John). In other words, children are quite productive with their speech, applying dative shift to many verbs, but are constrained by morphophonological criteria (monosyllabic vs. polysyllabic verbs), and semantic criteria (possession change).[14]:205

Gropen et al.’s 1989 studies[14]:238 investigated these two hypotheses. According to these theorists, a strict “conservatism hypothesis” is false. Children in their studies did not only use the double-object construction with verbs they had heard in that alternation. However, the theorists proposed that a weaker version of the conservatism hypothesis is true, because children used verbs more often than not in the alternation they had heard them used in. In regard to the “criteria hypothesis”, evidence shows that children do indeed have criteria-governed productivity, but only in a very general way.

A new hypothesis was proposed to account for everything the original hypotheses couldn't (Gropen et al., 1989).[14]:203–257 This hypothesis is a mixture of the “weak” conservatism hypothesis, the criteria hypothesis, and lexical information. The main idea presented is that speakers acquire a “dative rule” that operates on two levels: the "broad range" and the "narrow range" levels.

On the “broad-range level” the rule applies semantically and lexically, or “lexicosemantically.” In this account, the syntactic change and semantic constraints of the dative rule are consequences of a single operation, namely the lexicosemantic shift. File:Gropen and Pinker Dative Shift Flowchart.pdf That is, if a verb beginning in the “X causes Y to go to Z” structure can alternate with the “X causes Z to have Y” structure and the sentence remains well-formed, then the child realizes that this verb can undergo dative shift. Figure 5, to the right, illustrates the alternation process.

Verbs that undergo the "dative shift" rule must also be specified by a possessor-possession relationship. Verbs whose meanings are not cognitively compatible with the notion of a possession change will not produce a coherent semantic structure in the double object construction.

The constraints characterized by this broad-range level form as a combination of children’s lexical, semantic, and syntactic structural innate knowledge, and the frequency of these forms in their input.[14]:240–242

On the “narrow-range level” the dative rule constricts the broad-level rule, allowing it only to apply to subclasses of semantically and morphologically similar verbs. Narrow-range rules could be acquired by a procedure that is weakly conservative, in that the only verbs that the child allows to undergo the dative shift freely are those verbs that they have actually heard undergo an alternation, or verbs that are semantically similar to them. The narrow subclasses of verbs are simply the set of verbs that are similar to a verb the child has heard to alternate. ‘Semantic similarity’ would be defined as verbs that share most or all of their grammatically-relevant semantic structure (ex. the notions of “go”, “be”, “have”, or “act”, and kinds of causal relations such as “cause”, “let”, and “prevent”, including the verbs “throw” and “kick”, which share the same general semantic structure of “cause”).[14]:244–246

Children would not apply the constraint to the class of “future having” verbs because they are not all from the native (monosyllabic) class, thereby allowing the following DOC examples to be well-formed: