listen); Latgalian: Daugpiļs [ˈdaʊkʲpʲilʲsʲ]; Russian: Даугавпилс [ˈdaʊɡəfpʲɪls]; see other names) is a city in southeastern Latvia, located on the banks of the Daugava River, from which the city gets its name. Daugavpils literally means "Daugava Castle". It is the second largest city in the country after the capital Riga, which is located some 230 kilometres (143 miles) to its north-west. Daugavpils has a favorable geographical position as it borders Belarus and Lithuania (distances of 33 km (21 mi) and 25 km (16 mi) respectively). It is located some 120 km (75 mi) from the Latvian border with Russia. Daugavpils is a major railway junction and industrial centre and lies approximately midway between Riga and Minsk.

The city is surrounded by many lakes and nature parks. It is also known for its overwhelmingly Russian-speaking population.

Historically, several names in various languages have identified Daugavpils. Some are still in use today.

Here is a chronology of name changes:

The city has a moderate continental climate. 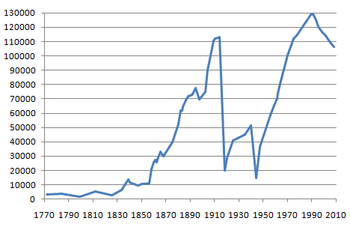 In Daugavpils 85% of the voters supported the proposal to make Russian the second state language in the 2012 referendum.[4] 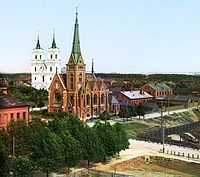 A 1912 photo by Prokudin-Gorsky

The town's history began in 1275 when the Livonian Order built Dünaburg castle 20 km (12 mi) up the Daugava river from where Daugavpils is now situated. In 1561 it became part of the Grand Duchy of Lithuania and, subsequently, of the Polish–Lithuanian Commonwealth in 1569 (see Duchy of Livonia). In 1621 Daugavpils became the capital of the newly formed Inflanty Voivodeship, which existed until the First Partition of Poland (1772). In 1577 the Russian tsar Ivan the Terrible captured and destroyed Dünaburg castle. That same year, a new castle was built 20 km (12 mi) downriver. In 1582 Daugavpils was granted Magdeburg town rights. In the 17th century, during the Russo–Swedish War initiated by Tsar Alexis of Russia, the Russians captured Daugavpils, renamed the town Borisoglebsk and controlled the region for 11 years, between 1656 and 1667. Russia returned the area to Polish–Lithuanian Commonwealth following the Treaty of Andrusovo (1667). It was become part of Russian Empire after First Partition of Poland in 1772. It was an uyezd center firstly in Pskov Governorate between 1772 and 1776, Polotsk one between 1776 and 1796, Belarus one between 1796 and 1802 and finally Vitebsk between 1802 and 1917 as "Dinaburg" firstly, as "Dvinsk" laterly during Russian rule.

As part of the Russian Empire the city was called Dvinsk from 1893 to 1920. The newly independent Latvian state renamed it Daugavpils in 1920. Latvians, Poles and Soviet troops fought the Battle of Daugavpils in the area from 1919 to 1920. Daugavpils and the whole of Latvia was under the Soviet Union rule between 1940–41 and 1944–1991, while Germany occupied it between 1941 and 1944. The Nazis established the Daugavpils Ghetto where the town's Jews were forced to live. Most were murdered. During the Cold War the Lociki air-base operated 12 km (7 mi) northeast of Daugavpils itself.

On Friday 16 April 2010 an assassin shot vice-mayor Grigorijs Ņemcovs in the center of the city. He died almost immediately and the crime remains unsolved. 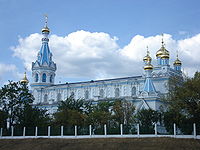 Daugavpils is an important cultural center in eastern Latvia. There are 22 primary and secondary schools, four vocational schools, and the Saules College of Art. More than 1,000 teachers and engineers graduate from Daugavpils Pedagogical University (now Daugavpils University) and the local branch of Riga Technical University annually. There is also one Polish school, the only in the city, on Varšavas iela (Warsaw Street). 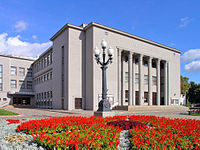 The city theatre was restored a couple of years ago. There is also one cinema as well as other cultural institutions. The city exhibition center offers many cultural activities.

There are also several architectural, historical, and cultural monuments in Daugavpils. The most prominent is the Daugavpils fortress dating mostly from the 18th and 19th centuries. In April 2013 the Mark Rothko Art centre was opened in fortress.

The historical centre of Daugavpils city is an architectural heritage of national importance (the construction work was carried out in the 19th century according to the project endorsed in St Petersburg in 1826). The historical centre is the greatest attraction of the city and one of the most successful examples of balancing the aspects of ancient and modern times. Daugavpils is one of the few cities in Latvia which can pride itself on a unified ensemble of both classic and eclectic styles. The cultural heritage of architectural, artistic, industrial, and historical monuments combined with the picturesque surroundings create the essence of Daugavpils’ image and endow it with a special charm.

Daugavpils is exceptionally rich in red brick buildings. This style was developed by many outstanding architects. In Daugavpils this variety of eclecticism is most widely represented in the buildings designed by Wilhelm Neumann, an architect of German origin who was the chief architect of the city from 1878 to 1895. Bright examples of brick architecture are the buildings at 1/3 Saules Street and at 8 Muzeja Street. The shape-forming techniques typical of eclecticism that were applied in the façades of these buildings even many decades later make one appreciate and admire the striking accuracy of detail. 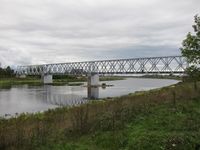 Daugavpils satiksme AS oversees the city's autobus and tram networks.

The city's railway station is the terminus of the Riga–Daugavpils Railway. 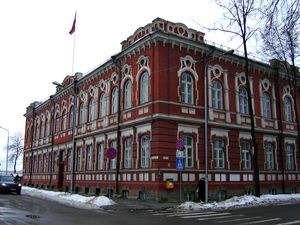 The head of the city government is the mayor of Daugavpils (domes priekšsēdētājs) literally 'Council Chairman'. The incumbent is Jānis Lāčplēsis, who is a member of the lv (Latgale Party) and has served since 2013 and previously from 2009 to 2011 (then a member of LPP/LC). His party has an electoral agreement with the Unity party at a national level.

The Council consists of 15 members who are elected every four years.

The Speedway Grand Prix of Latvia is currently held at the Latvijas Spīdveja Centrs with America's triple World Champion Greg Hancock being the most successful rider in Latvia winning the GP in 2009, 2009 and 2013. Lokomotiv Daugavpils is a Motorcycle speedway team based in Daugavpils who currently race in Polish First League (2nd division).

In 2008 the construction of the Daugavpils Multifunctional Sports Complex was started and was completed in October 2009. 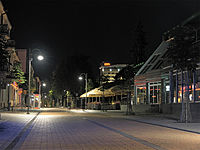 Daugavpils is twinned with: