David M. Jones (December 18, 1913 – November 25, 2008) was a United States Air Force pilot who served with distinction during World War II. He was one of the Doolittle Raiders whose exploits in April 1942 were dramatized in the film Thirty Seconds Over Tokyo. He then flew combat missions over North Africa, where he was shot down. He was a German prisoner of war for two and a half years — helping with the escape attempt described in the book Great Escape, which was later the subject of a Hollywood film.[1] The character Virgil Hilts, played by Steve McQueen on the 1963 film was partially based on Jones.[2]

In his last assignment with the Air Force, Jones was the commander of the Air Force Eastern Test Range in Cape Kennedy, Florida as well as the Department of Defense Manager for Manned Space Flight Support Operations. He retired from the Air Force after 37 years of distinguished service.

David Mudgett Jones was born on December 18, 1913 in Marshfield, Oregon, the son of David Arthur (Dade) Jones and Grace Mudgett. His father Dade Jones, the son of Welsh immigrants, homesteaded land in Meadow Lake Township, North Dakota in 1896 before marrying Grace and moving to Oregon.

David Jones enlisted in the Arizona National Guard while he was attending the University of Arizona at Tucson, from 1932 to 1936. His later education included three major Armed Forces schools: Command and General Staff School in Fort Leavenworth, Kansas, 1946; Armed Forces Staff College in Norfolk, Virginia, 1948; and the National War College in Washington, D.C., 1956.

Jones was commissioned a second lieutenant in the U.S. Cavalry arm of the Arizona Army National Guard, where he served one year of active duty before transferring to the Army Air Corps and entering pilot training in June 1937. After completing his training in June 1938, he served as a pilot with the 17th Attack Group and then with the 95th Bombardment Squadron.

In early 1942, Jones volunteered for the Doolittle Project — a secret bombing raid to be launched on Japan in retaliation for the December 1941 attack on Pearl Harbor.[3] During the training phase of this project, he flew the initial evaluation flights on the specially equipped B-25 aircraft. On April 18, 1942, the Doolittle Raid launched from the United States Navy's aircraft carrier USS Hornet (CV-8), dropping their bombs on Tokyo and four other Japanese cities.[3] This raid was the first good news that the Americans had from the Pacific front.

Lacking the fuel to make a safe landing after the raid, Jones bailed out over China, where he was assisted by the Chinese people in returning to the United States. He received the Distinguished Flying Cross for his participation as a flight commander in the planning, training and completion of the mission.

North Africa, prisoner of war, and The Great Escape 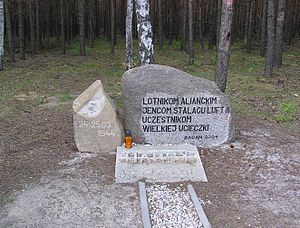 Scene of the "Harry" tunnel in Stalag Luft III.

In September 1942, Jones was assigned as commander of the 319th Bombardment Group in North Africa. He was assigned to develop low-level bombing tactics and techniques due to his experience with the Doolittle project and his belief in low-level bombing tactics. On December 4, 1942, he was shot down over Bizerte, North Africa, and spent two and a half years as a prisoner of war in Stalag Luft III.[4] As a result of his constant agitation and harassment of the enemy, he was selected for the "escape committee" by fellow prisoners. The committee reviewed escape plans and directed escapes.[4] Jones led the digging team on tunnel "Harry" used in the Great Escape, chronicled in the Paul Brickhill's autobiographical book, and immortalized in the 1963 film starring Steve McQueen.[1] After his liberation in April 1945, Jones was commended for leadership among his fellow prisoners.[4]

In July 1946, Jones was assigned as an air inspector at Headquarters Air Training Command. He followed this with attendance at the Armed Forces Staff College, which he completed in 1948. During this time, the U.S. Army Air Forces was disestablished and his commission was transferred to the newly established United States Air Force. He then served as Director of War Plans at Headquarters Tactical Air Command at Langley AFB, Virginia, followed by an assignment as Director of Combat Operations for the Ninth Air Force; then as Commander of the 47th Bombardment Group, until February 1952.

He was then the commander of the 47th Bombardment Wing (a B-45 Tornado jetbomber wing) at Langley Air Force Base, Virginia and at RAF Sculthorpe, England until July 1955.[4] 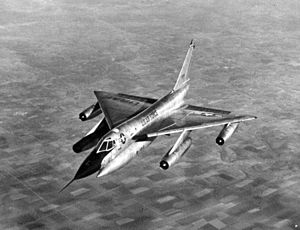 Jones began working in research and development in 1956 when he was the Deputy Chief of Staff for Operations for the Air Proving Ground Command at Eglin Air Force Base, Florida. His experience in bombardment-type aircraft and previous command staff assignments in research and development resulted in his being selected director of the B-58 Test Force, organized in February 1958 at Carswell Air Force Base, Texas. The B-58 Hustler was the first operational jet bomber capable of Mach 2 supersonic flight. During this time, Jones continued to maintain his flight status in the B-58, TF-102, and T-33 aircraft; participating in design speed dashes, low-level penetrations, night, weather, formation and inflight refueling missions. He had more supersonic time testing the B-58 than any senior U.S. Air Force pilot.

In September 1960, he became vice commander of the Wright Air Development Division at Wright-Patterson Air Force Base, Ohio. In October 1961, he was named program manager of the GAM-87 "Skybolt" at Air Force Systems Command's Aeronautical Systems Division. When that project was cancelled, he became ASD deputy for systems management and later vice commander.

In August 1964, he became deputy chief of staff for systems at Headquarters Air Force Systems Command at Andrews Air Force Base, Maryland, which had responsibility for all USAF research, development, and weapon system acquisition.

In December 1964, Jones became Deputy Assistant Administrator for Manned Space Flight with the National Aeronautics and Space Administration (NASA).[5] In July 1965, he was given responsibility for development of the S-IVB Orbital Workshop and spent-stage experiment support module (SSESM) — a concept of "in-orbit" conversion of a spent S-IVB stage to a shelter.[5] In August 1965, he took on the additional duties as of the Saturn/Apollo Applications (SAA) Acting Director.[5] Then, in May 1967, he assumed duties as commander of the Air Force Eastern Test Range, Patrick AFB and Cape Kennedy AFS, Florida.

Jones retired at the rank of Major General on May 31, 1973. He was one of five Doolittle Raiders who later became general officers;[6] the others are James H. Doolittle, John A. Hilger, Everett W. Holstrom, and Richard A. Knobloch.

Jones died on November 25, 2008, at age 94, at his home in Tucson, Arizona.[7] He was preceded in death by his first wife Anita Maddox Jones, and survived by his wife Janna-Neen Johnson-Dingell-Cunningham-Jones, daughter (Jere Jones Yeager), two sons (David Jones and Jim Jones) and a stepdaughter (Ann-Eve Grace Dingell-Cunningham) .[7] At the time of his death, out of the eighty men who participated in the Doolittle Raid, there were ten survivors.[3]

This article incorporates text in the public domain from the United States Air Force.