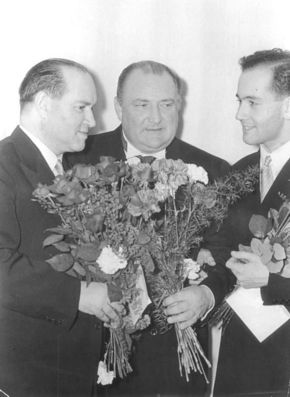 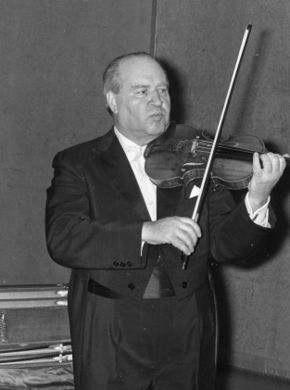 Oistrakh collaborated with major orchestras and musicians from many parts of the world, including the Soviet Union, Europe, and the United States, and was the dedicatee of numerous violin works, including both of Dmitri Shostakovich's violin concerti, and the violin concerto by Aram Khachaturian. He is considered one of the preeminent violinists of the 20th century.

He was born in the cosmopolitan city of Odessa in the Russian Empire (now Ukraine) into a Jewish family. His father was David Kolker and his mother was Isabella Beyle (née Stepanovsky), who later on married Fishl Oistrakh.[1] At the age of five, young Oistrakh began his studies of violin and viola as a pupil of Pyotr Stolyarsky. In his studies with Stolyarsky he made very good friends with Daniel Shindarov, with whom he performed numerous times around the world, even after becoming famous, as students at Stolyarsky School of Music.

In 1914, at the age of six, Oistrakh performed his debut concert. He entered the Odessa Conservatory in 1923, where he studied until his graduation in 1926. In the Conservatory he also studied harmony with composer Mykola Vilinsky. His 1926 graduation concert consisted of Bach's Chaconne, Tartini's Devil's Trill Sonata, Rubinstein's Viola Sonata, and Prokofiev's Violin Concerto No. 1 in D major. In 1927, Oistrakh appeared as soloist playing the Glazunov Violin Concerto under the composer's own baton in Kiev, Ukraine—a concert which earned him an invitation to play the Tchaikovsky Violin Concerto in Leningrad with the Philharmonic Orchestra under Nikolai Malko the following year.

In 1927, Oistrakh relocated to Moscow, where he gave his first recital and met his future wife: pianist Tamara Rotareva (1906-1976). They were married a year later, and had one child, Igor Oistrakh, who was born in 1931. Igor Oistrakh would follow his father's path as a violinist, and eventually performed and recorded side-by-side with his father, including Bach's Double Concerto, which they first recorded in 1951, and Mozart's Sinfonia Concertante. In at least one of the recordings of Mozart's Sinfonia Concertante, Igor Oistrakh played violin, while David Oistrakh played viola.

From 1934 onwards, David Oistrakh held a position teaching at the Moscow Conservatory, and was later made professor in 1939. Some of his colleagues while teaching at the Moscow Conservatory included Yuri Yankelevich and Boris Goldstein. Oistrakh taught Oleg Kagan, Emmy Verhey, Gidon Kremer, Zoya Petrosyan, Victor Danchenko, Cyrus Forough, Olga Parhomenko, and his son Igor Oistrakh.

From 1940 to 1963, Oistrakh performed extensively in a trio that also included the cellist Sviatoslav Knushevitsky and the pianist Lev Oborin. It was sometimes called the 'Oistrakh Trio.' Oistrakh collaborated extensively with Oborin, as well as Jacques Thibaud, a French violinist.

During World War II, he was active in the Soviet Union, premiering new concerti by Nikolai Miaskovsky and Khachaturian as well as two sonatas by his friend Sergei Prokofiev. He was also awarded the Stalin Prize in 1942. The final years of the war saw the blossoming of a friendship with Shostakovich, which would lead to the two violin concertos and the sonata, all of which were to be premiered by and become firmly associated with Oistrakh in the following years. Oistrakh's career was set from this point, although the Soviet Union was "protective" of its people and refused to let him perform abroad. He continued to teach in the Moscow Conservatory, but when Nazi Germany invaded the Soviet Union, he went to the front lines, playing for soldiers and factory workers under intensely difficult conditions. Arguably one of the most heroic acts in his life was a performance of Tchaikovsky's violin concerto to the end in the central music hall during the Battle of Stalingrad in the winter of 1942 while central Stalingrad was being massively bombed by the German forces. However, other sources indicate that Oistrakh performed in Leningrad that winter.[2] Whether Oistrakh performed in Stalingrad is unconfirmed. 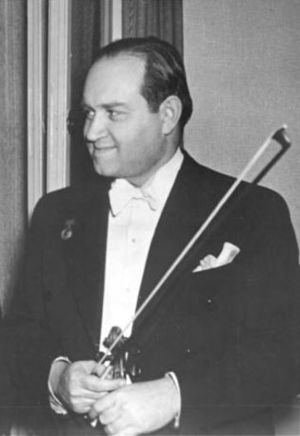 Oistrakh was allowed to travel after the end of the war. He traveled to the countries in the Soviet bloc and even to the West. His first foreign engagement was to appear at the newly founded "Prague Spring" Festival where he was met with enormous success. In 1949 he gave his first concert in the West – in Helsinki. In 1951, he appeared at the "Maggio Musicale" Festival in Florence, in 1952 he was in East Germany for the Beethoven celebrations, France in 1953, Britain in 1954, and eventually, in 1955, he was allowed to tour the United States. By 1959, he was beginning to establish a second career as a conductor, and in 1960 he was awarded the coveted Lenin Prize. His Moscow conducting debut followed in 1962, and by 1967 he had established a partnership with the celebrated Soviet pianist Sviatoslav Richter.

1968 saw wide celebrations for the violinist's sixtieth birthday, which included a celebratory performance in the Great Hall of Moscow Conservatory of the Tchaikovsky concerto, one of his favourite works, under the baton of Gennady Rozhdestvensky. Oistrakh was now seen as one of the great violinists of his time, among such luminaries as Romania's George Enescu and Lithuanian-born Jascha Heifetz.

Oistrakh suffered a heart attack as early as 1964. He survived and continued to work at a furious pace. He had already become one of the principal cultural ambassadors for the Soviet Union to the West in live concerts and recordings. After conducting a cycle of Brahms with the Concertgebouw Orchestra, he died from another heart attack in Amsterdam in 1974. His remains were returned to Moscow, where he was interred in Novodevichy Cemetery.

Oistrakh received many awards and distinctions. Within the Soviet Union, David Oistrakh was awarded the Stalin Prize in 1943, the title of People's Artist of the USSR in 1953, and the Lenin Prize in 1960. He also won the 1935 Soviet Union Competition. Several reputable works from the standard violin repertoire are dedicated to Oistrakh, including a concerto by Khachaturian, two concerti by Shostakovich, and several other pieces.

Oistrakh's fame and success were not only limited to the Soviet Union: he placed second at the Henryk Wieniawski Violin Competition in Warsaw, after 16-year-old prodigy Ginette Neveu, and further improved upon that by winning the grand prize in the Queen Elisabeth Competition in Brussels.

Additionally, the asteroid 42516 Oistrach is named in honour of him and his son, the violinist Igor Oistrakh.

David Oistrakh used bows by Albert Nürnberger and Andre Richaume throughout his life. Up until 1957, he used a Nürnberger bow. "The Andre Richaume bow bought by his son Igor Oistrakh in 1957 had filled David with such enthusiasm that Igor made a gift of it."[3] Oistrakh had remarked that this (Richaume) bow gave him great satisfaction, so much so that when in Paris, he had to meet Richaume in person.[3]