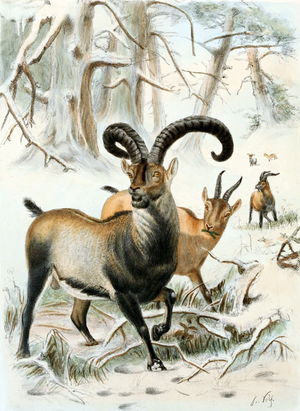 The Pyrenean ibex, or bucardo, is the first animal to have survived de-extinction past birth.

De-extinction, or resurrection biology, or species revivalism is the process of creating an organism, which is either a member of, or resembles an extinct species, or breeding population of such organisms. Cloning is the most widely proposed method, although selective breeding has also been proposed. Similar techniques have been applied to endangered species.

There is significant controversy over de-extinction,[1] and critics assert that efforts would be better spent conserving existing species, and that the habitat necessary for formerly extinct species to survive is too limited to warrant de-extinction.

Cloning is one method discussed as an option for bringing extinct species back. Proponents include author Stewart Brand, and proposed species include the passenger pigeon and the woolly mammoth.[2][3] De-extinction efforts are now underway to revive the passenger pigeon by extracting DNA fragments and taking skin samples from preserved specimens and, later, using band-tailed pigeons or rock pigeons as surrogate parents.[4][5] 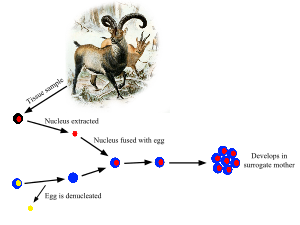 A team of Russian and South Korean scientists are, as of April 2013, in the planning stages of cloning a woolly mammoth using an Asian elephant as a surrogate mother. Large amounts of well-preserved mammoth tissue have been found in Siberia. If the process can be completed, there are plans to introduce the mammoths to Pleistocene Park, a wildlife reserve in Siberia.[6] (Evolutionary biologist Beth Shapiro points out that "cloning" is a specific technique which cannot be accomplished without a living cell, none of which are available for mammoths, but suggests genome editing might be feasible.)[7]

Although de-extinction efforts have not yet succeeded in producing viable offspring of a previously extinct species, the same process has been applied successfully to endangered species. The banteng is the second endangered species to be successfully cloned, and the first to survive for more than a week (the first was a gaur that died two days after being born).[8][9] Scientists at Advanced Cell Technology in Worcester, Massachusetts, United States extracted DNA from banteng cells kept in the San Diego Zoo's "Frozen Zoo" facility, and transferred it into eggs from domestic cattle, a process called somatic cell nuclear transfer. Thirty hybrid embryos were created and sent to Trans Ova Genetics, which implanted the fertilized eggs in domestic cattle. Two were carried to term and delivered by Caesarian section.[10] The first hybrid was born on April 1, 2003, and the second two days later. The second was euthanized,[11] but the first survived and, as of September 2006, remained in good health at the San Diego Zoo.

Scientists from the University of Newcastle and the University of New South Wales reported in May 2013 the successful cloning of the extinct frog Rheobatrachus silus using the process of somatic cell nuclear transfer. The embryos developed for several days but died. In an important development the scientists from Newcastle reported associated technologies that provide a "proof of concept" for the proposal that frozen zoos (also referred to as genome banks and seed banks) are an effective mechanism to provide an insurance against species extinction and the loss of population genetic diversity. They connected the circle between de-extinction and the prevention of extinction for threatened animal species. The important advances were the capacity to successfully recover live frozen embryonic cells from animals that produce large yolky eggs (anamniotes such as fishes and amphibians)[12][13][14] When this development is combined with somatic cell nuclear transfer (SCNT) it enables the genome to be recovered. The scientists point out that many embryonic cells can be frozen and when combined with frozen sperm storage enables the genetic diversity of populations to be stored. With groups of vertebrates such as the amphibians facing an extinction crisis they propose this as an effective means to prevent extinction while the causes of declines can be identified and remedied. The technical difference between frozen tissue samples commonly used for genetic studies (e.g. phylogenetic reconstruction) and those in a frozen zoo is the use of cryoprotectants and special freezing rates at the time of freezing and thawing.

The aurochs, which became extinct in 1627, could possibly be brought back by taking DNA samples from bone and teeth fragments in museums in order to obtain genetic material to recreate its DNA. Researchers would then compare the DNA to that of modern European cattle to determine which breeds still carry the creature's genes, and then undertake a selective breeding program to reverse the evolutionary process. The intention would be that with every passing generation, the cattle would more closely resemble the ancient aurochs.[15]

Opponents of de-extinction have claimed that efforts, and resources, to resurrect extinct species could have been better used trying to conserve endangered species that might themselves become extinct.[17]

It has also been noted that a resurrected species, while being genetically the same as previously living specimens, will not have the same behaviour as its predecessors. The first animal to be brought back will be raised by parents of a different species (the fetus's host), not the one that died out and thus have differing mothering techniques and other behaviors.[5]

Scientific American, in an editorial condemning de-extinction, pointed out that the technologies involved could have secondary applications, specifically to help species on the verge of extinction regain their genetic diversity, for example the black-footed ferret or the northern white rhinoceros. It noted, however, that such research "should be conducted under the mantle of preserving modern biodiversity rather than conjuring extinct species from the grave."[17]

Other scholars have published ethical concerns regarding de-extinction. In Conservation Biology, Robert Sandler argues that introducing extinct species to environments may produce harm to modern species, as invasive species. Issues regarding scientific hubris, human and animal health, and the ecology of sensitive environments have been raised by the scientific community. Further research must be performed regarding de-extinction to investigate advantages and disadvantages to the technology. New technological practices must be examined to prevent environmental hazards.[18]

The second method involves artificially inseminating an elephant egg cell with sperm cells from a frozen woolly mammoth carcass. The resulting offspring would be an elephant–mammoth hybrid, and the process would have to be repeated so more hybrids could be used in breeding. After several generations of cross-breeding these hybrids, an almost pure woolly mammoth would be produced. The fact that sperm cells of modern mammals are potent for 15 years at most after deep-freezing is a hindrance to this method.[26] In one case, an Asian elephant and an African elephant produced a live calf named Motty, but it died of defects at less than two weeks old.[27]

In 2008, a Japanese team found usable DNA in the brains of mice that had been frozen for 16 years. They hope to use similar methods to find usable mammoth DNA.[28] In 2011, Japanese scientists announced plans to clone mammoths within six years.[29] In 2009, the Pyrenean ibex (a subspecies of the Spanish ibex) was the first extinct animal to be cloned back to life; the clone lived for only seven minutes before dying of lung defects.[30] As the woolly mammoth genome has been mapped, a complete strand of DNA may be synthesised in the future.[31] Mammoth expert Adrian Lister questions the ethics of such recreation attempts. In addition to the technical problems, he notes that there is not much habitat left that would be suitable for woolly mammoths. Because the species was gregarious, creating a few specimens would not be ideal. He also notes that the time and resources required would be enormous, and that the scientific benefits would be unclear; these resources should instead be used to preserve extant elephant species which are endangered.[26] However, it was reported in March 2014 that blood recovered from a frozen mammoth carcass in 2013 now provides a "High chance" of cloning the woolly mammoth, despite previous hindrances.[32]

Another way to revive the woolly mammoth would be to migrate genes from the mammoth genome into the genes of its closest living relative, the Asian elephant, to create hybridized animals with the notable adaptations that it had for living in a much colder environment than modern day elephants. This is currently being done by Harvard geneticist George Church, and they have already successfully made changes in the elephant genome with the genes that gave the woolly mammoth its cold-resistant blood, longer hair, and extra layer of fat.[33]

A revived woolly mammoth or mammoth-elephant hybrid may find suitable habitat in the tundra and taiga forest ecozones,[34] and may also find refuge in Pleistocene Park, a Pleistocene rewilding experiment by Russian scientist Sergey Zimov to recreate the mammoth steppe, the former habitat of the woolly mammoth.[35] While mammoths are not required for the recreation of the steppe, they would be highly effective in doing so by quickly clearing brush and forest and allowing grasses to colonize the area, a capability that modern arctic megafauna do not have.

The Australian Museum in Sydney began a cloning project in 1999.[57] The goal was to use genetic material from specimens taken and preserved in the early 20th century to clone new individuals and restore the species from extinction. Several molecular biologists have dismissed the project as a public relations stunt and its chief proponent, Mike Archer, received a 2002 nomination for the Australian Skeptics Bent Spoon Award for "the perpetrator of the most preposterous piece of paranormal or pseudo-scientific piffle."[58] In late 2002, the researchers had some success as they were able to extract replicable DNA from the specimens.[59] On 15 February 2005, the museum announced that it was stopping the project after tests showed the DNA retrieved from the specimens had been too badly degraded to be usable.[60][61] In May 2005, Archer, the University of New South Wales Dean of Science at the time, former director of the Australian Museum and evolutionary biologist, announced that the project was being restarted by a group of interested universities and a research institute.[62][63] The International Thylacine Specimen Database was completed in April 2005, and is the culmination of a four-year research project to catalog and digitally photograph, if possible, all known[64][65] surviving thylacine specimen material held within museum, university and private collections. The master records are held by the Zoological Society of London.[55] In 2008, researchers Andrew J. Pask and Marilyn B. Renfree from the University of Melbourne and Richard R. Behringer from the University of Texas at Austin reported that they managed to restore functionality of a gene Col2A1 enhancer obtained from 100-year-old ethanol-fixed thylacine tissues from museum collections. The genetic material was found working in transgenic mice. The research enhanced hopes of eventually restoring the population of thylacines.[66][67] That same year, another group of researchers successfully sequenced the complete thylacine mitochondrial genome from two museum specimens. Their success suggests that it may be feasible to sequence the complete thylacine nuclear genome from museum specimens. Their results were published in the journal Genome Research in 2009.[68] Mike Archer spoke about the possibilities of resurrecting the thylacine and the gastric-brooding frog at TED2013.[69] Stewart Brand spoke at TED2013 about the ethics and possibilities of de-extinction, and made reference to thylacine in his talk.[70]