From Infogalactic: the planetary knowledge core
Jump to: navigation, search
This article is about the computer science concept. For other uses, see Deadlock (disambiguation). 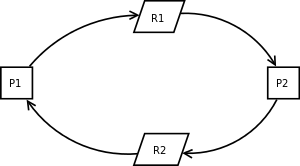 In concurrent programming, a deadlock is a situation in which two or more competing actions are each waiting for the other to finish, and thus neither ever does.

In a transactional database, a deadlock happens when two processes each within its own transaction updates two rows of information but in the opposite order. For example, process A updates row 1 then row 2 in the exact timeframe that process B updates row 2 then row 1. Process A can't finish updating row 2 until process B is finished, but process B cannot finish updating row 1 until process A is finished. No matter how much time is allowed to pass, this situation will never resolve itself and because of this, database management systems will typically kill the transaction of the process that has done the least amount of work.

Deadlock is a common problem in multiprocessing systems, parallel computing and distributed systems, where software and hardware locks are used to handle shared resources and implement process synchronization.[2]

In telecommunication systems, deadlocks occur mainly due to lost or corrupt signals instead of resource contention.[3]

Any deadlock situation can be compared to the classic "chicken or egg" problem.[4] It can also be considered a paradoxical "Catch-22" situation.[5]

Moving onto the source code level, a deadlock can occur even in the case of a single thread and one resource (protected by a mutex). Assume there is a function f1 which does some work on the resource, locking the mutex at the beginning and releasing it after it's done. Next, somebody creates a different function f2 following that pattern on the same resource (lock, do work, release) but decides to include a call to f1 to delegate a part of the job. What will happen is the mutex will be locked once when entering f2 and then again at the call to f1, resulting in a deadlock if the mutex is not reentrant (i.e. the plain "fast mutex" variety).

A deadlock situation can arise if all of the following conditions hold simultaneously in a system:[6]

These four conditions are known as the Coffman conditions from their first description in a 1971 article by Edward G. Coffman, Jr.[7] Unfulfillment of any of these conditions is enough to preclude a deadlock from occurring.

An effective way to avoid database deadlocks is to follow this approach from the Oracle Locking Survival Guide:

Application developers can eliminate all risk of enqueue deadlocks by ensuring that transactions requiring multiple resources always lock them in the same order.[8]

This single sentence needs some explanation:

Deadlocks offer a challenging problem to correct as they result in data loss, are difficult to isolate, cause unexpected problems, and are time-consuming to fix. Modifying every section of software code in a large database-oriented system in order to always lock resources in the same order when the order is inconsistent takes significant resources and testing to implement.

In this approach, it is assumed that a deadlock will never occur. This is also an application of the Ostrich algorithm.[10][11] This approach was initially used by MINIX and UNIX.[7] This is used when the time intervals between occurrences of deadlocks are large and the data loss incurred each time is tolerable.

Under deadlock detection, deadlocks are allowed to occur. Then the state of the system is examined to detect that a deadlock has occurred and subsequently it is corrected. An algorithm is employed that tracks resource allocation and process states, it rolls back and restarts one or more of the processes in order to remove the detected deadlock. Detecting a deadlock that has already occurred is easily possible since the resources that each process has locked and/or currently requested are known to the resource scheduler of the operating system.[11]

Deadlock detection techniques include, but are not limited to, model checking. This approach constructs a finite state-model on which it performs a progress analysis and finds all possible terminal sets in the model. These then each represent a deadlock.

After a deadlock is detected, it can be corrected by using one of the following methods:

Deadlock prevention works by preventing one of the four Coffman conditions from occurring.

Deadlock can be avoided if certain information about processes are available to the operating system before allocation of resources, such as which resources a process will consume in its lifetime. For every resource request, the system sees whether granting the request will mean that the system will enter an unsafe state, meaning a state that could result in deadlock. The system then only grants requests that will lead to safe states.[13] In order for the system to be able to determine whether the next state will be safe or unsafe, it must know in advance at any time:

Another way to avoid deadlock is to avoid blocking, for example by using non-blocking synchronization or read-copy-update.

A livelock is similar to a deadlock, except that the states of the processes involved in the livelock constantly change with regard to one another, none progressing. This term was defined formally at some time during the 1970s—an early sighting in the published literature is in Babich's 1979 article on program correctness.[14] Livelock is a special case of resource starvation; the general definition only states that a specific process is not progressing.[15]

A real-world example of livelock occurs when two people meet in a narrow corridor, and each tries to be polite by moving aside to let the other pass, but they end up swaying from side to side without making any progress because they both repeatedly move the same way at the same time.

Livelock is a risk with some algorithms that detect and recover from deadlock. If more than one process takes action, the deadlock detection algorithm can be repeatedly triggered. This can be avoided by ensuring that only one process (chosen arbitrarily or by priority) takes action.[16]

Phantom deadlocks are deadlocks that are falsely detected in a distributed system due to system internal delays but don't actually exist. For example, if a process releases a resource R1 and issues a request for R2, and the first message is lost or delayed, a coordinator (detector of deadlocks) could falsely conclude a deadlock (if the request for R2 while having R1 would cause a deadlock).