Death Valley is a desert valley located in Eastern California. It is the lowest, driest, and hottest area in North America.

Located near the border of California and Nevada, in the Great Basin, east of the Sierra Nevada mountains, Death Valley constitutes much of Death Valley National Park and is the principal feature of the Mojave and Colorado Deserts Biosphere Reserve. It is located mostly in Inyo County, California. It runs from north to south between the Amargosa Range on the east and the Panamint Range on the west; the Sylvania Mountains and the Owlshead Mountains form its northern and southern boundaries, respectively. It has an area of about 3,000 sq mi (7,800 km2).[5] The highest point in Death Valley itself is Telescope Peak in the Panamint Range, which has an elevation of 11,043 feet (3,366 m). 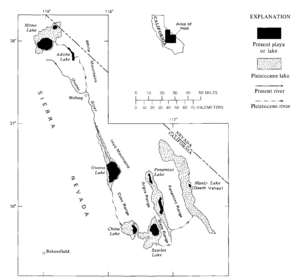 Death Valley is one of the best geological examples of a basin and range configuration. It lies at the southern end of a geological trough known as Walker Lane, which runs north into Oregon. The valley is bisected by a right lateral strike slip fault system, represented by the Death Valley Fault and the Furnace Creek Fault. The eastern end of the left lateral Garlock Fault intersects the Death Valley Fault. Furnace Creek and the Amargosa River flow through the valley but eventually disappear into the sands of the valley floor.

Death Valley also contains salt pans. According to current geological consensus, at various times during the middle of the Pleistocene era, inland lakes (collectively referred to as Lake Manly) formed in Death Valley. Lake Manley received water overflowing from a chain of other Pleistocene lakes, most of which are now also dry lakebeds. As the area turned to desert, the water evaporated, leaving the abundance of evaporitic salts such as common sodium salts and borax, which were later exploited during the modern history of the region, primarily 1883 to 1907.[6]

Death Valley has a subtropical, hot desert climate (Köppen: BWh), with long, extremely hot summers and short, warm winters as well as little rainfall. As a general rule, lower altitudes tend to have higher temperatures. When the sun heats the ground, that heat is then radiated upward, but the dense below-sea-level air acts as a blanket and reflects the heat back. In addition, the high valley walls trap rising hot air and recycle it back down to the valley floor, where it is heated by compression.[7]

This process is especially important in Death Valley as it provides its specific climate and geography. The valley is surrounded by mountains, while its surface is mostly flat and devoid of plants, and so much of the sun's heat can reach the ground, absorbed by soil and rock. When air at ground level is heated, it begins to rise, moving up past steep, high mountain ranges, which then cools slightly, sinking back down towards the valley more compressed. This air is then reheated by the sun to a higher temperature, moving up the mountain again, whereby the air moves up and down in a circular motion in cycles, similar to how a convection oven works. This superheated air increases ground temperature markedly, forming the hot wind currents that are trapped by atmospheric pressure and mountains, thus stays mostly within the valley. Such hot wind currents contribute to perpetual drought-like conditions in Death Valley and prevent much cloud formation from passing through the confines of the valley, where precipitation is often in the form of a virga.[8] Death Valley holds temperature records because it has an unusually high number of factors that lead to high atmospheric temperatures.

The depth and shape of Death Valley influence its summer temperatures. The valley is a long, narrow basin 282 feet (86 m) below sea level, yet is walled by high, steep mountain ranges. The clear, dry air and sparse plant cover allow sunlight to heat the desert surface. Summer nights provide little relief as overnight lows may only dip into the 82 to 98 °F (28 to 37 °C) range. Moving masses of super-heated air blow through the valley creating extremely high temperatures.[9] 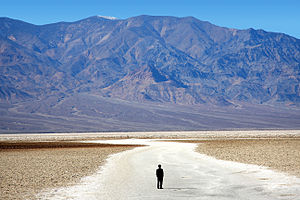 The average annual precipitation in Death Valley is 2.36 inches (60 mm), while the Greenland Ranch station averaged 1.58 in (40 mm).[22] The wettest month on record is January 1995 when 2.59 inches (66 mm) fell on Death Valley.[8] The wettest period on record was mid-2004 to mid-2005, in which nearly 6 inches (150 mm) of rain fell in total, leading to ephemeral lakes in the valley and the region and tremendous wildflower blooms.[23] Snow with accumulation has only been recorded in January 1922, while scattered flakes have been recorded on other occasions. 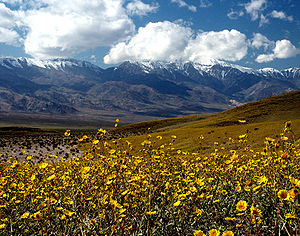 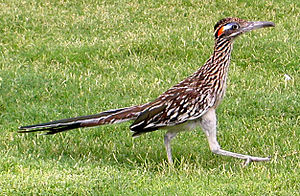 In spite of the overwhelming heat and sparse rainfall, Death Valley exhibits surprising biodiversity. Wildflowers, watered by snowmelt, carpet the desert floor each spring, continuing into June.[23] Bighorn sheep, red-tailed hawks, and wild burros may be seen. Death Valley has over 600 springs and ponds. Salt Creek, a mile-long shallow depressing in the center of the valley, supports pupfish.[27]

Darwin Falls, on the western edge of Death Valley Monument, falls a hundred feet into a large pond surrounded by willows and cottonwood trees. Over 80 species of birds have been spotted around the pond.[28] 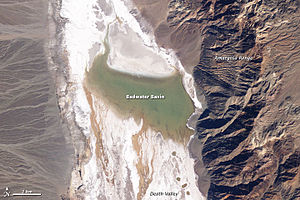 A Landsat 5 satellite photo of Lake Badwater on February 9, 2005 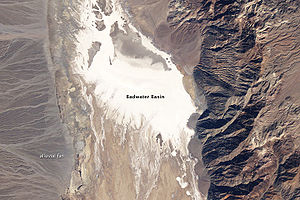 In 2005, Death Valley received four times its average annual rainfall of 1.5 inches (38 mm). As it has done before for hundreds of years, the lowest spot in the valley filled with a wide, shallow lake, but the extreme heat and aridity immediately began sucking the ephemeral lake dry.

This pair of images from NASA's Landsat 5 satellite documents the short history of Death Valley's Lake Badwater: formed in February 2005 (top) and long gone by February 2007 (bottom). In 2005, a big pool of greenish water stretched most of the way across the valley floor. By May 2005 the valley floor had resumed its more familiar role as Badwater Basin, a salt-coated salt flats. In time, this freshly dissolved and recrystallized salt will darken.

The western margin of Death Valley is traced by alluvial fans. During flash floods, rainfall from the steep mountains to the west pours through narrow canyons, picking up everything from fine clay to large rocks. When these torrents reach the mouths of the canyons, they widen and slow, branching out into braided streams. The paler the fans, the younger they are.

During the Pleistocene ice age, which ended roughly 10,000–12,000 years ago, the Sierra Nevada was much wetter. During that time, Death Valley was filled with a huge lake, called Glacial Lake Manly, that was nearly 100 miles (160 km) long and 600 feet (180 m) deep, the end-basin in a chain of lakes that began with Mono Lake in the north and continued through multiple basins down the Owens River Valley through Searles and China Lakes and the Panamint Valley to the immediate west.[29] Remnants of this wetter period can still be seen in the region today, including the presence of several isolated populations of pupfish.[27]

Death Valley is home to the Timbisha tribe of Native Americans, formerly known as the Panamint Shoshone, who have inhabited the valley for at least the past millennium. The Timbisha name for the valley, tümpisa, means "rock paint" and refers to the red ochre paint that can be made from a type of clay found in the valley. Some families still live in the valley at Furnace Creek. Another village was in Grapevine Canyon near the present site of Scotty's Castle. It was called in the Timbisha language maahunu, whose meaning is uncertain, although it is known that hunu means "canyon".

The valley received its English name in 1849 during the California Gold Rush. It was called Death Valley by prospectors[30] and others who sought to cross the valley on their way to the gold fields, after 13 pioneers perished from one early expedition of wagon trains.[31] During the 1850s, gold and silver were extracted in the valley. In the 1880s, borax was discovered and extracted by mule-drawn wagons.

On the afternoon of July 10, 1913, the United States Weather Bureau recorded a high temperature of 134 °F (56.7 °C) at Greenland Ranch (now Furnace Creek) in Death Valley.[4] This temperature stands as the highest ambient air temperature ever recorded at the surface of the Earth. (A report of a temperature of 58 °C (136.4 °F) recorded in Libya in 1922 was later determined to be inaccurate.)[10] 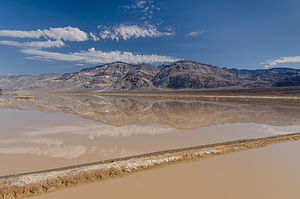