From Infogalactic: the planetary knowledge core
Jump to: navigation, search
File:Death march from Dachau.jpg
Dachau concentration camp inmates on a death march, April 1945, photographed walking through a German village, heading in the direction of Wolfratshausen, Bavaria.

Death marches (Todesmärsche in German) refer to the forcible movements of prisoners in Nazi Germany. They occurred at various points during the Holocaust, including in 1939 in the Lublin province of Poland, in 1942 in Ukraine, and between Autumn 1944 and late April 1945 from Nazi concentration camps and prisoner of war camps near the front, to camps inside Germany away from front lines and Allied forces to remove evidence from concentration camps and to prevent the repatriation of prisoners of war.[citation needed]

Towards the end of World War II in 1944, Allied forces advanced from the west, while forces of the Soviet Union advanced from the east. Trapped in the middle, the SS – not wanting the world to know about the Holocaust – decided to abandon the Nazi concentration camps, moving or destroying evidence of the atrocities they had committed there. Thousands of prisoners were killed in the camps before the marches commenced. These executions were deemed crimes against humanity during the Nuremberg trials. 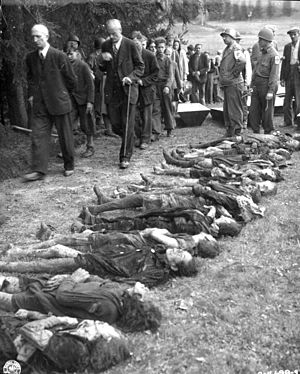 May 11, 1945: German civilians are forced to walk past the bodies of 30 Jewish women starved to death by German SS troops in a 500-kilometre (300 mi) march across Czechoslovakia. Buried in shallow graves in Volary, Czechoslovakia, the bodies were exhumed by German civilians working under the direction of Medics of the 5th Infantry Division, US Third Army. The bodies were later placed in coffins and reburied in the cemetery in Volary.

Although most of the prisoners were already very weak or ill after enduring the routine violence, overwork, and starvation of concentration camp or prison camp life, they were marched for miles in the snow to railway stations, then transported for days at a time without food, water, or shelter in freight carriages originally designed for cattle. On arrival at their destination, they were then forced to march again to new camps. Prisoners who were unable to keep up due to fatigue or illness were usually executed by gunshot.

The first evacuation of Majdanek inmates started in April 1944. The prisoners of Kaiserwald were transported to Stutthof or killed in August. Mittelbau-Dora was evacuated in April 1945.[1] The largest death march in World War II was from Auschwitz-Birkenau to Loslau in January 1945.[citation needed]

The SS killed large numbers of prisoners by starvation before the marches, and shot many more dead both during and after for not being able to keep pace. Seven hundred prisoners were killed during one ten-day march of 7,000 Jews, including 6,000 women, who were being moved from camps in the Danzig region. Those still alive when the marchers reached the coast were forced into the Baltic Sea and shot.[2]

Elie Wiesel, Holocaust survivor and winner of the 1986 Nobel Peace Prize, describes in his 1958 book Night how he and his father, Shlomo, were forced on a death march from Buna to Buchenwald.[3]

Chełm to Hrubieszów, Sokal and Belz

In December 1939, male Jews from Chełm, Poland aged between 16 and 60, were forced on a death march to the nearby town of Hrubieszów. There, Jews were rounded up and forced to join the Chełm Jews. They were split into two groups on separate marches to Sokal and Belz, both across the modern border between Poland and Ukraine. In all, an estimated 2,000 Jews were murdered on this death march. There were only a handful of survivors.[4]

Lublin to Biała Podlaska and Parczew

In January 1940, the Germans deported a group of prisoners from the Lipowa 7 prisoner of war camp to Biała Podlaska and then to Parczew. They rushed them on foot among snowstorms and temperatures below −20 °C (−4 °F). Those POWs who did not follow orders were killed by the German guards. The inhabitants of the nearby villages were forced to collect and bury the bodies in mass graves. Only a small group of prisoners survived this march of death. A few were able to escape into the woods and join the partisans.[5]

In early June, 1942 Jews concentrated in Belz were driven in a 60-kilometre (37 mi) death march to Hrubieszow. Those who could not continue on the way were shot by the SS guards. All death march survivors were deported along with about 3,000 Jews from Hrubieszow to Sobibor.[6]

The most notorious of the death marches took place in January 1945, when the Soviet army advanced on occupied Poland. Nine days before the Soviets arrived at the death camp at Auschwitz, the SS marched nearly 60,000 prisoners out of the camp toward Wodzisław Śląski (German: Loslau), 56 km (35 mi) away, where they were put on freight trains to other camps. Approximately 15,000 prisoners died on the way.[7]

The evacuation of the about 50,000 prisoners from the Stutthof camp system in northern Poland began in January 1945. About 5,000 prisoners from Stutthof subcamps were marched to the Baltic Sea coast, forced into the water, and machine gunned. The rest of the prisoners were marched in the direction of Lauenburg in eastern Germany. They were cut off by the advancing Soviet forces. The Germans forced the surviving prisoners back to Stutthof. Marching in severe winter conditions and treated brutally by SS guards, thousands died during the march.[2]

In late April 1945, the remaining prisoners were removed from Stutthof by sea, since it was completely encircled by Soviet forces. Again, hundreds of prisoners were forced into the sea and shot. Over 4,000 were sent by small boat to Germany, some to the Neuengamme concentration camp near Hamburg, and some to camps along the Baltic coast. Many drowned along the way. Shortly before the German surrender, some prisoners were transferred to Malmö, Sweden, and released to the care of that neutral country. It has been estimated that over 25,000 prisoners, one in two, died during the evacuation from Stutthof and its subcamps. One hundred prisoners were liberated from Stutthof on May 9, 1945.[2]

Dachau to the Austrian border

On April 24, 1945, the satellite labor camps around Dachau were being cleared out by the Nazis ahead of the advancing Allied troops, and some 15,000 prisoners were first marched to the Dachau camp, only to be sent southwards on a death march towards the Austrian border. By the timeframe of the second of May 1945, only some 6,000 of the prisoners sent on the death march were still alive, as those in failing health were being shot dead as they fell along the route. On that day, as the prisoners were nearing Waakirchen, nearly sixty kilometers (37 miles) south of Dachau, several hundred of them were lying on the open ground in ill health, and among them were some who had already died from ill health and exposure to the elements, nearly all covered in freshly-fallen snow. These prisoners were spotted by advance scouts of the U.S. Army's 522nd Field Artillery Battalion, the only segregated Japanese American-manned military unit in Germany at the time — who had, only days before, liberated the Kaufering IV Hurlach satellite slave labor camp[8] of the Dachau main camp's "system", and many of whose own relatives were themselves interned during the war on American soil — with the American troops doing what they could in attempts to save those left alive, for at least two days before dedicated medical personnel could take over.[9]