Dechristianization of France during the French Revolution

From Infogalactic: the planetary knowledge core
(Redirected from Dechristianisation of France during the French Revolution)
Jump to: navigation, search
"Dechristianization" redirects here. For other uses, see Dechristianization (disambiguation).

The dechristianization of France during the French Revolution is a conventional description of the results of a number of separate policies conducted by various governments of France between the start of the French Revolution in 1789 and the Concordat of 1801, forming the basis of the later and less radical Laïcité movement. The goal of the campaign was the destruction of Catholic religious practice and of the religion itself.[1] There has been much scholarly debate over whether the movement was popularly motivated or something forced upon the people by those in power.[1]

The Church under the Ancien Régime

In 18th-century France, the vast majority of the population adhered to the Catholic Church; most of the non-Catholic minority were Protestant Huguenots, who, although greatly outnumbered by the Catholics, nonetheless retained powerful positions in French local governments[citation needed]. The Ancien Régime institutionalised the authority of the clergy in its status as the First Estate of the realm. As the largest landowner in the country, the Catholic Church controlled properties which provided massive revenues from its tenants;[citation needed] the Church also had an enormous income from the collection of tithes.[citation needed] Since the Church kept the registry of births, deaths, and marriages and was the only institution that provided primary and secondary education and hospitals, it influenced all citizens.

New policies of the Revolutionary authorities

The programme of dechristianization waged against Catholicism, and eventually against all forms of Christianity, included:[2][3][4][need quotation to verify]

The climax[citation needed] of dechristianization came with the celebration of the goddess "Reason" in Notre Dame Cathedral on 10 November 1793.

The dechristianization campaign can be seen as the logical extension[5] of the materialist philosophies of some leaders of the Enlightenment such as Voltaire, while for others with more prosaic concerns it provided an opportunity to unleash resentments against the Catholic Church (in the spirit of conventional anti-clericalism) and its clergy.[6]

The Revolution and the Church

In August 1789, the State cancelled the taxing power of the Church. The issue of church property became central to the policies of the new revolutionary government. Declaring that all church property in France belonged to the nation, confiscations were ordered and church properties were sold at public auction. In July 1790, the National Constituent Assembly published the Civil Constitution of the Clergy that stripped clerics of their special rights — the clergy were to be made employees of the state, elected by their parish or bishopric, and the number of bishoprics was to be reduced — and required all priests and bishops to swear an oath of fidelity to the new order or face dismissal, deportation or death.

French priests had to receive Papal approval to sign such an oath, and Pius VI spent almost eight months deliberating on the issue. On 13 April 1791, the Pope denounced the Constitution, resulting in a split in the French Catholic church. Over fifty percent became abjuring priests ("jurors"), also known as "constitutional clergy", and nonjuring priests as "refractory clergy". 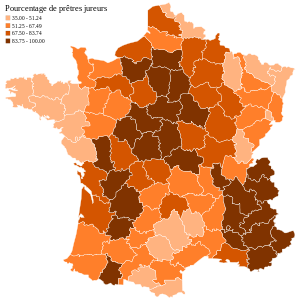 Map of France showing the percentage of juring priests in 1791. The borders of the map are those of 2007, because the data comes from archives of the modern departments.

In September 1792, the Legislative Assembly legalized divorce, contrary to Catholic doctrine. At the same time, the State took control of the birth, death, and marriage registers away from the Church. An ever-increasing view that the Church was a counter-revolutionary force exacerbated the social and economic grievances and violence erupted in towns and cities across France.

In Paris, over a forty-eight-hour period beginning on 2 September 1792, as the Legislative Assembly (successor to the National Constituent Assembly) dissolved into chaos, three Church bishops and more than two hundred priests were massacred by angry mobs; this constituted part of what would become known as the September Massacres. Priests were among those drowned in mass executions (noyades) for treason under the direction of Jean-Baptiste Carrier; priests and nuns were among the mass executions at Lyons, for separatism, on the orders of Joseph Fouché and Collot d'Herbois. Hundreds more priests were imprisoned and made to suffer in abominable conditions in the port of Rochefort.

Anti-church laws were passed by the Legislative Assembly and its successor, the National Convention, as well as by département councils throughout the country. Many of the acts of dechristianization in 1793 were motivated by the seizure of church gold and silver to finance the war effort.[7] In November 1793, the département council of Indre-et-Loire abolished the word dimanche (English: Sunday).[citation needed] The Gregorian calendar, an instrument decreed by Pope Gregory XIII in 1582, was replaced by the French Republican Calendar which abolished the sabbath, saints' days and any references to the Church.

Anti-clerical parades were held, and the Archbishop of Paris was forced to resign his duties and made to replace his mitre with the red "Cap of Liberty." Street and place names with any sort of religious connotation were changed, such as the town of St. Tropez, which became Héraclée. Religious holidays were banned and replaced with holidays to celebrate the harvest and other non-religious symbols. Robespierre and his colleagues decided to supplant both Catholicism and the rival atheistic Cult of Reason with the Cult of the Supreme Being. Just six weeks before his arrest, on 8 June 1794 the still-powerful Robespierre personally led a vast procession through Paris to the Tuileries garden in a ceremony to inaugurate the new faith.

The dechristianization of France reached its zenith around the middle of 1794 with the fall of Robespierre. By early 1795 a return to some form of religion-based faith was beginning to take shape and a law passed on 21 February 1795 legalized public worship, albeit with strict limitations. The ringing of church bells, religious processions and displays of the Christian cross were still forbidden.

As late as 1799, priests were still being imprisoned or deported to penal colonies and persecution only worsened after the French army led by General Louis Alexandre Berthier captured Rome and imprisoned Pope Pius VI, who would die in captivity in Valence, France in August 1799. Ultimately, with Napoleon now in ascendancy in France, year-long negotiations between government officials and the new Pope Pius VII led to the Concordat of 1801, formally ending the dechristianization period and establishing the rules for a relationship between the Roman Church and the French State.

Victims of the Reign of Terror totaled somewhere between 20,000 and 40,000. According to one estimate, among those condemned by the revolutionary tribunals about 8 percent were aristocrats, 6 percent clergy, 14 percent middle class, and 70 percent were workers or peasants accused of hoarding, evading the draft, desertion, rebellion, and other purported crimes.[8] Of these social groupings, the clergy of the Roman Catholic Church suffered proportionately the greatest loss.[8]

While persecution of certain Roman Catholic clerics and monastic orders occurred during the Third Republic, the Concordat of 1801 endured for more than a century until it was abrogated by the government of the Third Republic, which established a policy of laïcité on 11 December 1905.

Toll on the Church

Under threat of death, imprisonment, military conscription, and loss of income, about twenty thousand constitutional priests were forced to abdicate and hand over their letters of ordination, and six thousand to nine thousand of them agreed or were coerced to marry. Many abandoned their pastoral duties altogether.[1] Nonetheless, some of those who had abdicated continued covertly to minister to the people.[1]

By the end of the decade, approximately thirty thousand priests had been forced to leave France, and others who did not leave were executed.[6] Most French parishes were left without the services of a priest and deprived of the sacraments. Any non-juring priest faced the guillotine or deportation to French Guiana.[1] By Easter 1794, few of France's forty thousand churches remained open; many had been closed, sold, destroyed, or converted to other uses.[1]

Victims of revolutionary violence, whether religious or not, were popularly treated as Christian martyrs, and the places where they were killed became pilgrimage destinations.[1] Catechising in the home, folk religion, syncretic and heterodox practices all became more common.[1] The long-term effects on religious practice in France were significant. Many who were dissuaded from their traditional religious practices never resumed them.[1]