This article deals with decision-making as analyzed in psychology. See also Decision theory. 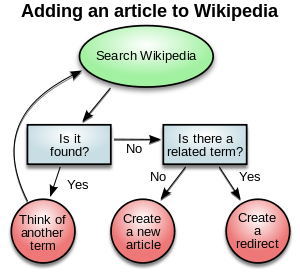 Sample flowchart representing the decision process to add a new article to Wikipedia.

Decision-making can be regarded as a problem-solving activity terminated by a solution deemed to be satisfactory. It is, therefore, a process which can be more or less rational or irrational and can be based on explicit knowledge or tacit knowledge.

Human performance with regard to decisions has been the subject of active research from several perspectives:

A major part of decision-making involves the analysis of a finite set of alternatives described in terms of evaluative criteria. Then the task might be to rank these alternatives in terms of how attractive they are to the decision-maker(s) when all the criteria are considered simultaneously. Another task might be to find the best alternative or to determine the relative total priority of each alternative (for instance, if alternatives represent projects competing for funds) when all the criteria are considered simultaneously. Solving such problems is the focus of multiple-criteria decision analysis (MCDA). This area of decision-making, although very old, has attracted the interest of many researchers and practitioners and is still highly debated as there are many MCDA methods which may yield very different results when they are applied on exactly the same data.[2] This leads to the formulation of a decision-making paradox.

Logical decision-making is an important part of all science-based professions, where specialists apply their knowledge in a given area to make informed decisions. For example, medical decision-making often involves a diagnosis and the selection of appropriate treatment. But naturalistic decision-making research shows that in situations with higher time pressure, higher stakes, or increased ambiguities, experts may use intuitive decision-making rather than structured approaches. They may follow a recognition primed decision that fits their experience and arrive at a course of action without weighing alternatives.[citation needed]

The decision-maker's environment can play a part in the decision-making process. For example, environmental complexity is a factor that influences cognitive function.[3] A complex environment is an environment with a large number of different possible states which come and go over time.[4] Studies done at the University of Colorado have shown that more complex environments correlate with higher cognitive function, which means that a decision can be influenced by the location. One experiment measured complexity in a room by the number of small objects and appliances present; a simple room had less of those things. Cognitive function was greatly affected by the higher measure of environmental complexity making it easier to think about the situation and make a better decision.[3]

Analysis paralysis is the state of over-analyzing (or over-thinking) a situation so that a decision or action is never taken, in effect paralyzing the outcome.

Information overload is "a gap between the volume of information and the tools we have to assimilate" it.[8] Excessive information affects problem processing and tasking, which affects decision-making.[9] Crystal C. Hall and colleagues described an "illusion of knowledge", which means that as individuals encounter too much knowledge it can interfere with their ability to make rational decisions.[10]

Evaluation and analysis of past decisions is complementary to decision-making. See also Mental accounting and Postmortem documentation.

In the 1980s, psychologist Leon Mann and colleagues developed a decision-making process called GOFER, which they taught to adolescents, as summarized in the book Teaching Decision Making To Adolescents.[12] The process was based on extensive earlier research conducted with psychologist Irving Janis.[13] GOFER is an acronym for five decision-making steps:

In 2007, Pam Brown of Singleton Hospital in Swansea, Wales, divided the decision-making process into seven steps:[14]

In 2009, professor John Pijanowski described how the Arkansas Program, an ethics curriculum at the University of Arkansas, used eight stages of moral decision-making based on the work of James Rest:[15]:6

According to B. Aubrey Fisher, there are four stages or phases that should be involved in all group decision-making:[16]

It is said that establishing critical norms in a group improves the quality of decisions, while the majority of opinions (called consensus norms) do not.[17]

In economics, it is thought that if humans are rational and free to make their own decisions, then they would behave according to rational choice theory.[18]:368–370 Rational choice theory says that a person consistently makes choices that lead to the best situation for himself or herself, taking into account all available considerations including costs and benefits; the rationality of these considerations is from the point of view of the person himself, so a decision is not irrational just because someone else finds it questionable.

In reality, however, there are some factors that affect decision-making abilities and cause people to make irrational decisions – for example, to make contradictory choices when faced with the same problem framed in two different ways (see also Allais paradox).

Herbert A. Simon coined the phrase "bounded rationality" to express the idea that human decision-making is limited by available information, available time and the mind's information-processing ability. Further psychological research has identified individual differences between two cognitive styles: maximizers try to make an optimal decision, whereas satisficers simply try to find a solution that is "good enough". Maximizers tend to take longer making decisions due to the need to maximize performance across all variables and make tradeoffs carefully; they also tend to more often regret their decisions (perhaps because they are more able than satisficers to recognise that a decision turned out to be sub-optimal).[26]

Styles and methods of decision-making were elaborated by Aron Katsenelinboigen, the founder of predispositioning theory. In his analysis on styles and methods, Katsenelinboigen referred to the game of chess, saying that "chess does disclose various methods of operation, notably the creation of predisposition-methods which may be applicable to other, more complex systems."[27]:5

Katsenelinboigen states that apart from the methods (reactive and selective) and sub-methods (randomization, predispositioning, programming), there are two major styles: positional and combinational. Both styles are utilized in the game of chess. According to Katsenelinboigen, the two styles reflect two basic approaches to uncertainty: deterministic (combinational style) and indeterministic (positional style). Katsenelinboigen's definition of the two styles are the following.

The combinational style is characterized by:

The positional style is distinguished by:

The positional style serves to:

According to Isabel Briggs Myers, a person's decision-making process depends to a significant degree on their cognitive style.[29][page needed] Myers developed a set of four bi-polar dimensions, called the Myers-Briggs Type Indicator (MBTI). The terminal points on these dimensions are: thinking and feeling; extroversion and introversion; judgment and perception; and sensing and intuition. She claimed that a person's decision-making style correlates well with how they score on these four dimensions. For example, someone who scored near the thinking, extroversion, sensing, and judgment ends of the dimensions would tend to have a logical, analytical, objective, critical, and empirical decision-making style. However, some psychologists say that the MBTI lacks reliability and validity and is poorly constructed.[30][31]

Other studies suggest that these national or cross-cultural differences in decision-making exist across entire societies. For example, Maris Martinsons has found that American, Japanese and Chinese business leaders each exhibit a distinctive national style of decision-making.[32]

Decision-making is a region of intense study in the fields of systems neuroscience, and cognitive neuroscience. Several brain structures, including the anterior cingulate cortex (ACC), orbitofrontal cortex and the overlapping ventromedial prefrontal cortex are believed to be involved in decision-making processes. A neuroimaging study[33] found distinctive patterns of neural activation in these regions depending on whether decisions were made on the basis of perceived personal volition or following directions from someone else. Patients with damage to the ventromedial prefrontal cortex have difficulty making advantageous decisions.[34][page needed]

A common laboratory paradigm for studying neural decision-making is the two-alternative forced choice task (2AFC), in which a subject has to choose between two alternatives within a certain time. A study of a two-alternative forced choice task involving rhesus monkeys found that neurons in the parietal cortex not only represent the formation of a decision but also signal the degree of certainty (or "confidence") associated with the decision.[35] Another recent study found that lesions to the ACC in the macaque resulted in impaired decision-making in the long run of reinforcement guided tasks suggesting that the ACC may be involved in evaluating past reinforcement information and guiding future action.[36] A 2012 study found that rats and humans can optimally accumulate incoming sensory evidence, to make statistically optimal decisions.[37]

Emotion appears able to aid the decision-making process. Decision-making often occurs in the face of uncertainty about whether one's choices will lead to benefit or harm (see also Risk). The somatic-marker hypothesis is a neurobiological theory of how decisions are made in the face of uncertain outcome. This theory holds that such decisions are aided by emotions, in the form of bodily states, that are elicited during the deliberation of future consequences and that mark different options for behavior as being advantageous or disadvantageous. This process involves an interplay between neural systems that elicit emotional/bodily states and neural systems that map these emotional/bodily states.[38] A recent lesion mapping study of 152 patients with focal brain lesions conducted by Aron K. Barbey and colleagues provided evidence to help discover the neural mechanisms of emotional intelligence.[39][40][41]

Although it is unclear whether the studies generalize to all processing, subconscious processes have been implicated in the initiation of conscious volitional movements. See the Neuroscience of free will.

In adolescents vs. adults

When adolescents are exposed to social and emotional stimuli, their socioemotional network is activated as well as areas of the brain involved in reward processing. Because teens often gain a sense of reward from risk-taking behaviors, their repetition becomes ever more probable due to the reward experienced. In this, the process mirrors addiction. Teens can become addicted to risky behavior because they are in a high state of arousal and are rewarded for it not only by their own internal functions but also by their peers around them.

Adults are generally better able to control their risk-taking because their cognitive-control system has matured enough to the point where it can control the socioemotional network, even in the context of high arousal or when psychosocial capacities are present. Also, adults are less likely to find themselves in situations that push them to do risky things. For example, teens are more likely to be around peers who peer pressure them into doing things, while adults are not as exposed to this sort of social setting.[42][43]