From Infogalactic: the planetary knowledge core
Jump to: navigation, search
This article is about decision problems in complexity theory. For the decision problem in formal logic, see Entscheidungsproblem. 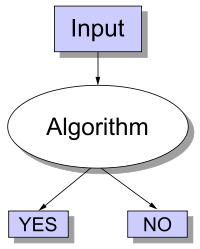 A decision problem has only two possible outputs, yes or no (or alternately 1 or 0) on any input.

In computability theory and computational complexity theory, a decision problem is a question in some formal system with a yes-or-no answer, depending on the values of some input parameters. Decision problems typically appear in mathematical questions of decidability, that is, the question of the existence of an effective method to determine the existence of some object or its membership in a set; some of the most important problems in mathematics are undecidable.

These inputs can be natural numbers, but may also be values of some other kind, such as strings over the binary alphabet {0,1} or over some other finite set of symbols. The subset of strings for which the problem returns "yes" is a formal language, and often decision problems are defined in this way as formal languages.

Alternatively, using an encoding such as Gödel numberings, any string can be encoded as a natural number, via which a decision problem can be defined as a subset of the natural numbers.

A classic example of a decidable decision problem is the set of prime numbers. It is possible to effectively decide whether a given natural number is prime by testing every possible nontrivial factor. Although much more efficient methods of primality testing are known, the existence of any effective method is enough to establish decidability.

A function problem consists of a partial function f; the informal "problem" is to compute the values of f on the inputs for which it is defined.