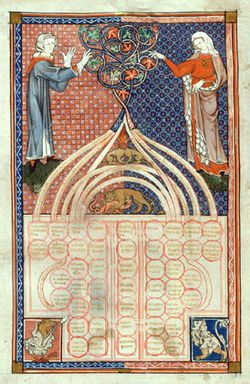 Page from medieval manuscript of the Decretum Gratiani.

The Decretum Gratiani, also known as the Concordia discordantium canonum or Concordantia discordantium canonum or simply as the Decretum, is a collection of canon law compiled and written in the 12th century as a legal textbook by the jurist known as Gratian. It forms the first part of the collection of six legal texts, which together became known as the Corpus Juris Canonici. It was used by canonists of the Roman Catholic Church until the Decretals, promulgated by Pope Gregory IX in 1234, obtained legal force.[1]

Around 1150 Gratian, teacher of theology at the monastery of Saints Nabor and Felix and sometimes believed to have been a Camaldolese monk,[2] composed the work he called Concordia discordantium canonum, and others titled Nova collectio, Decreta, Corpus juris canonici, or the more commonly accepted name, Decretum Gratiani. He did this to obviate the difficulties which beset the study of practical, external theology (theologia practica externa), i.e., the study of canon law. In spite of its great reputation and wide diffusion, the Decretum has never been recognized by the Church as an official collection.[citation needed]

It is divided into three parts (ministeria, negotia, sacramenta). The first part is divided into 101 distinctions (distinctiones), the first 20 of which form an introduction to the general principles of canon Law (tractatus decretalium); the remainder constitutes a tractatus ordinandorum, relative to ecclesiastical persons and function. The second part contains 36 causes (causæ), divided into questions (quæstiones), and treat of ecclesiastical administration and marriage; the third question of the 33rd causa treats of the Sacrament of Penance and is divided into 7 distinctions. The third part De consecratione treats of the sacraments and other sacred things and contains 5 distinctions. Each distinction or question contains dicta Gratiani, or maxims of Gratian, and canones. Gratian himself raises questions and brings forward difficulties, which he answers by quoting auctoritates, i. e. canons of councils, decretals of the popes, texts of the Scripture or of the Fathers. These are the canones; the entire remaining portion, even the summaries of the canons and the chronological indications, are called the maxims or dicta Gratiani. Many auctoritates have been inserted in the Decretum by authors of a later date. These are the Paleœ, so called from Paucapalea, the name of the principal commentator on the Decretum. The Roman revisers of the 16th century (1566–82) corrected the text of the "Decree" and added many critical notes designated by the words Correctores Romani.

The Decretum is quoted by indicating the number of the canon and that of the distinction or of the cause and the question. To differentiate the distinctions of the first part from those of the third, question of the 33rd cause of the second part and those of the third part, the words de Pœn., i. e. de Pœnitentiâ, and de Cons., i. e. de Consecratione are added to the latter. For instance, "c. 1. d. XI" indicates the first part of the "Decree". distinction XI, canon 1; "c. 1., de Pœn., d. VI," refers to the second part, 33rd cause, question 3, distinction VI, canon 1; "c. 8, de Cons., d. II" refers to the third part, distinction II, canon 8; "c. 8, C. XII, q. 3" refers to the second part, cause XII, question 3, canon 8. Sometimes, especially in the case of well-known and much-quoted canons, the first words are also indicated, e. g., c. Si quis suadente diabolo, C. XVII, q. 4, i. e. the 29th canon of the second part, cause XVII, question 4. Occasionally the first words alone are quoted. In both cases, to find the canon it is necessary to consult the alphabetical tables (printed in all editions of Gratian) that contain the first words of every canon. 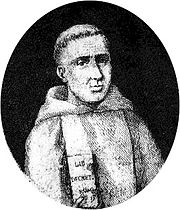 Gratian (Medieval Latin: Gratianus) was a canon lawyer from Bologna. He flourished in the mid 12th century. Little else is known about him.

He is sometimes incorrectly referred to as Franciscus Gratianus,[3] Johannes Gratian,[2] or Giovanni Graziano. For a long time he was believed to have been born at the end of the 11th century, at Chiusi in Tuscany. He was said to have become a monk at Camaldoli and then taught at the monastery of St. Felix in Bologna and devoted his life to studying canon law, but contemporary scholarship does not attach credibility to these traditions.[4] Since the 11th century, Bologna had been the centre of the study of canon law, as well as of Roman law, after the Corpus Juris Civilis was rediscovered in western Europe. Gratian's work was an attempt, using early scholastic method, to reconcile seemingly contradictory canons from previous centuries. Gratian quoted a great number of authorities, including the Bible, papal and conciliar legislation, church fathers such as Augustine of Hippo, and secular law in his efforts to reconcile the canons. Gratian found a place in Dante's Paradise among the doctors of the Church:[5]

He has long been acclaimed as Pater Juris Canonici (Latin, "Father of Canon Law"), a title he shares with his successor St. Raymond of Penyafort.

The vulgate version of Gratian's collection was completed at some point after the Second Council of the Lateran of 1139, which it quotes. Research by Anders Winroth established that some manuscripts of an early version of Gratian's text, which differs considerably from the mainstream textual tradition, have survived.[7] With later commentaries and supplements, the work was incorporated into the Corpus Juris Canonici. The Decretum quickly became the standard textbook for students of canon law throughout Europe, but it never received any formal, official recognition by the papacy. Only the Codex Juris Canonici of 1917 put it out of use.[8]

As late as 1997, scholars commonly set the date of completion at 1140, but this accuracy in dating isn't possible after Anders Winroth's groundbreaking scholarship.[9] Research by Anders Winroth shows that the Decretum existed in two published recensions.[10] The first dates to sometime after 1139, while the second dates to 1150 at the latest. There are several major differences between the two recensions:

These differences led Winroth to conclude that Roman law was not as far developed by 1140 as scholars had previously thought. He has also argued that the second recension was due not to the original author of the first recension (whom he calls Gratian 1), but rather another jurist versed in Roman law.[11] However, Winroth's thesis of two Gratians remains controversial.[12]

An illustration from a 13th-century manuscript of the work, illustrating the kinds of blood relatives and common ancestry which made marriage impossible and contracted marriages null. It has since then been changed so third cousins can now marry.

This field of inquiry is hampered by ignorance of the compiler's identity and the existence of manuscripts with abbreviated versions of the text or variant versions not represented by Winroth's two recensions. One of these is the manuscript St. Gall, Stiftsbibliothek, 673 (=Sg), which some have argued contains the earliest known version (borrador) of the Decretum,[13] but which other scholars have argued contains an abbreviation of the first recension expanded with texts taken from the second recension.[14]

Gratian's sources were Roman law, the Bible, the writings of (or attributed to) the Church Fathers, papal decretals, the acts of church councils and synods. In most cases, Gratian obtained the material not from a direct reading of the sources but rather through intermediate collections. Thanks to the research of modern scholars (in particular Charles Munier, Titus Lenherr, and Peter Landau) it is now known that Gratian made use of a relatively-small number of collections in the composition of most of the Decretum:

Other sources are known to have been used in the composition of particular sections of the Decretum:

Gratian himself named his work Concordia Discordantium Canonum – "Concord of Discordancies of Canons." The name is fitting: Gratian tried to harmonize apparently contradictory canons with each other, by discussing different interpretations and deciding on a solution. This dialectical approach allowed for other law professors to work with the Decretum and to develop their own solutions and commentaries. These legists are known as the decretists.

...the Concordance of Discordant Canons or Decretum served the function of giving the canonists a text like that of the Corpus Iuris Civilis for the civilians or the bible for the theologians.[16]

These commentaries were called glosses. Editions printed in the 15th, 16th or 17th centuries frequently included the glosses along with the text. Collections of glosses were called "gloss apparatus" or Lectura in Decretum (see also glossator). Systematic commentaries were called Summae. Some of these Summae were soon in circulation as well and obtained the same level of fame as the Decretum itself. Early commentators included Paucapalea and Magister Rolandus. The most important commentators were probably Rufin of Bologna (died before 1192) and Huguccio (died 1210). Less well-known was the commentary of Simon of Bisignano, which consisted of the Glosses on the Decretum and the Summa Simonis.

Peter Lombard borrowed and adapted from the Decretum when discussing penance in his Sentences (~1150).[17]

The Decretum served as a model for 12th-century jurists in the formation of Western law, based on rational rules and evidence to replace barbaric laws which often involved trial by ordeal or battle.[18]

The Decretum has been called "the first comprehensive and systematic legal treatise in the history of the West, and perhaps in the history of mankind – if by 'comprehensive' is meant the attempt to embrace virtually the entire law of a given polity, and if by 'systematic' is meant the express effort to codify that law as a single body, in which all parts are viewed as interacting to form a whole." The Decretum made a direct contribution to the development of Western law in areas that it dealt with such as marriage, property and inheritance. Specific concepts included consent for marriage, and wrongful intent in determining whether a certain act constituted a crime.[18]