A deed (anciently an evidence) is any legal instrument in writing which passes, affirms or confirms an interest, right, or property and that is signed, attested, delivered, and in some jurisdictions sealed. It is commonly associated with transferring title to property. The deed has a greater presumption of validity and is less rebuttable than an instrument signed by the party to the deed. A deed can be unilateral or bilateral. Deeds include conveyances, commissions, licenses, patents, diplomas, and conditionally powers of attorney if executed as deeds. The deed is the modern descendant of the medieval charter, and delivery is thought to symbolically replace the ancient ceremony of livery of seisin.[1]

The traditional phrase signed, sealed and delivered refers to the practice of seals; however, attesting witnesses have replaced seals to some extent. Agreements under seal are also called contracts by deed or specialty; in the United States, a specialty is enforceable without consideration.[2] In some jurisdictions, specialties have a liability limitation period of double that of a simple contract and allow for a third party beneficiary to enforce an undertaking in the deed, thereby overcoming the doctrine of privity.[3] Specialties, as a form of contract, are bilateral and can therefore be distinguished from covenants, which, being also under seal, are unilateral promises.

At common law, to be valid and enforceable, a deed must fulfill several requirements:

Conditions attached to the acceptance of a deed are known as covenants. A deed indented or indenture is one executed in two or more parts according to the number of parties, which were formerly separated by cutting in a curved or indented line known as the chirograph.[5] A deed poll is one executed in one part, by one party, having the edge polled or cut even, and includes simple grants and appointments.

In the transfer of real estate, a deed conveys ownership from the old owner (the grantor) to the new owner (the grantee), and can include various warranties. The precise name and nature of these warranties differ by jurisdiction. Often, however, the basic differences between them is the degree to which the grantor warrants the title. The grantor may give a general warranty of title against any claims, or the warranty may be limited to only claims which occurred after the grantor obtained the real estate. The latter type of deed is usually known as a special warranty deed. While a general warranty deed was normally used for residential real estate sales and transfers, special warranty deeds are becoming more common and are more commonly used in commercial transactions.

A third type of deed, known as a bargain and sale deed, implies that the grantor has the right to convey title but makes no warranties against encumbrances. This type of deed is most commonly used by court officials or fiduciaries that hold the property by force of law rather than title, such as properties seized for unpaid taxes and sold at sheriff's sale, or an executor.

A so-called quitclaim deed is (in most jurisdictions) actually not a deed at all—it is actually an estoppel disclaiming rights of the person signing it to property.

In some jurisdictions, a deed of trust is used as an alternative to a mortgage. A deed of trust is not used to transfer property directly. It is commonly used in some states — California, for example — to transfer title to land to a “trustee”, usually a trust or title company, which holds the title as security ("in escrow") for a loan. When the loan is paid off, title is transferred to the borrower by recording a release of the obligation, and the trustee's contingent ownership is extinguished. Otherwise, upon default, the trustee will liquidate the property with a new deed and offset the lender's loss with the proceeds.

Deeds as alternatives to bankruptcy 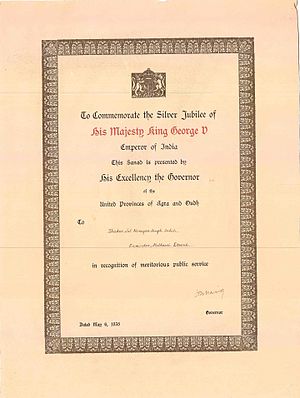 A sanad issued by the governor of the United Provinces of Agra and Oudh during the British Raj
See also: Doctrine of lapse

Sanad, also spelt as sunnud, was a deed granted to the rulers of native princely states in British India confirming them in their ruling position in return for their allegiance to the British Raj.

Since the extinction of the royal bloodline would be a ground for annexation of a principality by the British,[7] some rulers were also granted sanads of adoption. Devised as a reward for loyalty to British rule in India, especially after the Indian rebellion of 1857, such deeds gave a ruler the right to adopt chosen heirs from local noble families in case of lack of direct issue.[8] Among the rulers that were given Sanads of adoption, Takht Singh, Jaswant Singh of Bharatpur, as well as the rulers of Nagod State, Samthar State and the Chaube Jagirs are worth mentioning.

The main clauses of a deed of conveyance are:

Usually the transfer of ownership of real estate is registered at a cadastre in the United Kingdom. In most parts of the United States, deeds must be submitted to the recorder of deeds, who acts as a cadastre, to be registered. An unrecorded deed may be valid proof of ownership between the parties, but may have no effect upon third-party claims until disclosed or recorded. A local statute may prescribe a period beyond which unrecorded deeds become void as to third parties, at least as to intervening acts.

Ownership transfer may also be crafted within deeds to pass by demise, as where a property is held in concurrent estate such as "joint tenants with right of survivorship" (JTWROS) or "tenants by the entirety". In each case, the title to the property immediately and automatically vests in the named survivor(s) upon the death of the other tenant(s).

A life estate is the right to use, possess and enjoy the property for a period of time measured by the natural life of a person or persons. When all life tenants are dead, the remainderman holds full title.

Joint tenants with rights of survivorship vs. joints tenants in common

When deeds are taken as joint tenants with rights of survivorship (JTWROS) or joint tenants in common (TIC), any co-owner can file a petition for partition to dissolve the tenancy relationship. JTWROS deed holders always take the property in equal shares; therefore, if the partnership is dissolved through partition, the proceeds must be equally distributed between all of the co-owners without regard to how much each co-owner contributed to the purchase price of the property. No credits would be allowed for any excess contributions to the purchase price. For example, if A and B co-own property as JTWROS and A contributed 80% of the purchase price, A and B would still receive equal distributions upon partition. On the other hand, TIC deed holders may be granted at partition a credit for unequal contributions to purchase price. During either partition, credits may be awarded to any co-owner who may have contributed in excess of his share to the property expenses after taking deed to the property. Credits may be allowed for utilities and maintenance; however, credits for improvements may not be allowed unless the improvements actually added substantial value to the property.

In the United States, a pardon of the President was once considered to be a deed and thus needed to be accepted by the recipient. This made it impossible to grant a pardon posthumously. However, in the case of Henry Ossian Flipper, this view was altered when President Bill Clinton pardoned him in 1999.

The United Kingdom, England and Wales operate a 'property register'. Title deeds are documents showing ownership, as well as rights, obligations, or mortgages on the property. Since around 2000, compulsory registration has been required for all properties mortgaged or transferred. The details of rights, obligations, and covenants referred to in deeds will be transferred to the register, a contract describing the property ownership.

Difference between a deed and an agreement

The main difference between a deed and an agreement is that the deed is generally signed by only one person / party. Examples of a deed are deeds of hypothecation for creating charge on movable properties in favour of the banks/financial institutions etc.

An agreement by its name suggests that there should be at least two parties signing/approving the same. Examples of an agreement are agreement to sale, loan agreement etc.

At common law, ownership was proven via an unbroken chain of title deeds. The Torrens title system is an alternative way of proving ownership. First introduced in South Australia in 1858 by Sir Robert Torrens and adopted later by the other Australian states and other countries, ownership under Torrens title is proven by possession of a certificate of title and the corresponding entry in the property register. This system removes risks associated with unregistered deeds and fraudulent or otherwise incorrect transactions. It is much easier and cheaper to administer, lowering transaction costs. Some Australian properties are still conveyed using a chain of title deeds - usually properties that have been owned by the same family since the nineteenth century - and these are often referred to as 'Old System' deeds.

Because title searching relies on the grantor/grantee indexes, it's possible that a deed won't be discovered even though it was recorded. "Example: Atwood sells his land to Burns, but Burns does not record his deed. Burns later sells the land to Cooper, and Cooper records her deed. But because the previous deed (the deed from Atwood to Burns) was not recorded, Cooper's deed is outside the chain of title. In a title search, someone looking up Atwood's name in the grantor index would find no indication that Atwood conveyed the property, and nothing would lead the searcher to Cooper's deed." A deed that is outside the chain of title is called a wild deed. The general rule is that a subsequent purchaser is not held to have constructive notice of a wild deed. In the example, Cooper's title is unprotected against subsequent good faith purchasers. Suppose Atwood were to fraudulently sell the same property to another person, Dunn. A court would rule that Dunn has good title to the property, not Cooper.[10]

A wild deed has been described as a deed "executed by a stranger to the record title hung out in the air like Mahomet's coffin."[11] Mahomet is an archaic spelling of Muhammad. There is a legend that the Prophet Muhammad's coffin was suspended without visible supports, from the ceiling of his tomb, just as a wild deed just hangs there, not touching the chain of title.[12]