From Infogalactic: the planetary knowledge core
Jump to: navigation, search
Not to be confused with Deer Lodge County, Montana.

Deer Lodge (Salish: sncwe[4]) is a city in and the county seat of Powell County, Montana, United States.[5] The population was 3,111 at the 2010 census. The city is perhaps best known as the home of the Montana State Prison, a major local employer. The Montana State Hospital in Warm Springs, and former state tuberculosis sanitarium is in nearby Galen are the result of the power the western part of the state held over Montana at statehood due to the copper and mineral wealth in that area.[6] Deer Lodge was also once an important railroad town, serving as a division headquarters for the Chicago, Milwaukee, St. Paul and Pacific Railroad ("the Milwaukee Road") before the railroad's local abandonment in 1980. 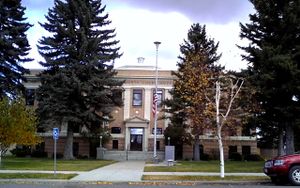 Deer Lodge is also the location of Grant-Kohrs Ranch National Historic Site, dedicated to the interpretation of the frontier cattle ranching era. This site was the home of Conrad Kohrs, one of the famous "Cattle Kings" of Montana whose land holdings once stretched over a million acres (4,000 km²) of Montana, Wyoming, and Alberta, Canada. The Grant-Kohrs ranch was built in 1862 by Johnny Grant, a Scottish/French/Metis fur-trader and trapper who encouraged his people to settle in Deer Lodge because of its pleasant climate and large areas of bunch grass prairie, ideal for raising cattle and horses. The city's name derives from a geological formation known as Warm Springs Mound which contained natural saline that made for a natural salt lick for the local deer population, the protected valley in which Deer Lodge is located was where most of the local wildlife would winter as the temperatures lowered in the high country.[7]

Deer Lodge was the site of the College of Montana, the first institution of higher learning in the state. 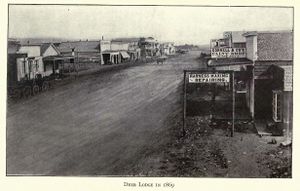 This climatic region is typified by large seasonal temperature differences, with warm to hot summers and cold—sometimes severely cold—winters. According to the Köppen Climate Classification system, Deer Lodge has a humid continental climate, abbreviated "Dfb" on climate maps.[10]

There were 1,386 households of which 27.9% had children under the age of 18 living with them, 43.9% were married couples living together, 12.2% had a female householder with no husband present, 5.0% had a male householder with no wife present, and 38.9% were non-families. 35.1% of all households were made up of individuals and 15.6% had someone living alone who was 65 years of age or older. The average household size was 2.19 and the average family size was 2.79.

There were 1,442 households out of which 29.3% had children under the age of 18 living with them, 49.7% were married couples living together, 9.2% had a female householder with no husband present, and 36.8% were non-families. 32.1% of all households were made up of individuals and 15.7% had someone living alone who was 65 years of age or older. The average household size was 2.32 and the average family size was 2.93.

The Silver State Post is Powell County's only newspaper. KBCK (1400 AM) and KQRV (96.9 FM) are two local radio stations.[citation needed]

The Montana Department of Corrections operates the current Montana State Prison facility in a nearby unincorporated area in Powell County, near Deer Lodge.[16]

Education in Powell County is served by Powell County High School located in Deer Lodge. In recent years[when?] the school has had an enrollment of about 300 students. The school currently competes athletically in the 6B conference with Superior, Missoula Loyola, Valley Christian, Darby and Florence. Although being in existence since 1903 the school won its first athletic team state championship in golf in 2005.[citation needed]

The William K. Kohrs Memorial Library, built in Deer Lodge in 1902, is "the only dedicated public library in Powell County."[17] The Kohrs library is modeled after the Carnegie Libraries. "It was built "for $30,000 by pioneer cattle baron Conrad Kohrs and his wife Augusta as a memorial to their son."[17] As of December 2012, the library was struggling financially, and was operating without a library director.[17]

Deer Lodge has been a filming location for a number of movies including:

In a 2004 documentary titled The Secret of Redgate by Lynda J. Cowen and Jim Marrs, a number of Deer Lodge residents explain about their experiences with extraterrestrial beings and the rumours surrounding these events. These occurrences which date back some fifty years took place at a location named Redgate on the eastside of Deer Lodge.[18]