In the sport of association football, a defender is an outfield player whose primary role is to prevent the opposing team from scoring goals. 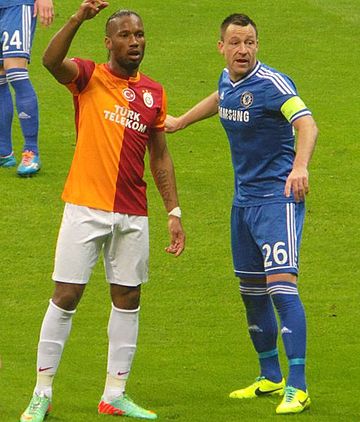 A centre-back (also known as a central defender or centre-half) defends in the area directly in front of the goal, and tries to prevent opposing players, particularly centre-forwards, from scoring. Centre-backs accomplish this by blocking shots, tackling, intercepting passes, contesting headers and marking forwards to discourage the opposing team from passing to them.

With the ball, centre-backs are generally expected to make short and simple passes to their teammates, or to kick unaimed long balls down the field. For example, a clearance is a long unaimed kick intended to move the ball as far as possible from the defender's goal.

During normal play, centre-backs are unlikely to score goals. However, when their team takes a corner kick or other set piece centre-backs may move forward to the opponents' penalty area: if the ball is passed in the air towards a crowd of players near the goal then the heading ability of a centre-back is useful when trying to score. In this case other defenders or midfielders will temporarily move into the centre-back positions.

The sweeper (or libero) is a more versatile centre-back who "sweeps up" the ball if an opponent manages to breach the defensive line. This position is rather more fluid than that of other defenders who man-mark their designated opponents. Because of this, it is sometimes referred to as libero ([ˈlibero]), which originated from the Italian name for this position libero da impegni di marcatura (i.e. "free from man-marking tasks"). Though sweepers may be expected to build counter-attacking moves, and as such require better ball control and passing ability than typical centre-backs, their talents are often confined to the defensive realm. For example, the catenaccio system of play, used in Italian football in the 1960s, employed a purely defensive sweeper who only "roamed" around the back line. The more modern libero possesses the defensive qualities of the typical libero whilst being able to expose the opposition during counterattacks. The Fundell-libero has become more popular in recent time with the sweeper transitioning to the most advanced forward in an attack. This variation on the position requires great pace and fitness. Whilst rarely seen in professional football the position has been extensively used in lower leagues. Modern libero sits behind centre-backs as a sweeper before charging through the team to join in the attack.[1]

Some sweepers move forward and distribute the ball up-field, while others intercept passes and get the ball off the opposition without needing to hurl themselves into tackles. If the sweeper does move up the field to distribute the ball, they will need to make a speedy recovery and run back into their position. In modern football, its usage has been fairly restricted, with few clubs in the biggest leagues using the position.

The position is most commonly associated to have been pioneered by Franz Beckenbauer and Elias Figueroa, and later by Gaetano Scirea, Franco Baresi and Matthias Sammer in the 1990s era, although they were not the first players to play this position, with earlier proponents such as Alexandru Apolzan, Ivano Blason, Velibor Vasović and Ján Popluhár.[2][3][4][5] Though it is rarely used in modern football, it remains a highly respected and demanding position.

A recent and successful use of the sweeper was made by Otto Rehhagel, Greece's manager, in the 2004 European Championship. Rehhagel utilized Traianos Dellas as Greece's sweeper to great success, as Greece surprisingly became European champions.

The full-backs take up the holding wide positions and traditionally stayed in defence at all times, until a set-piece. Modern full-backs take a more attacking role, overlapping with wingers down the flank. There is one full-back on each side of the field except in defences with fewer than four players, where there may be no full-backs and instead only centre-backs.[6]

In the modern game, full-backs have taken on a more attacking role than is the case traditionally.[7] Wingerless formations, such as the diamond 4–4–2 formation, demand the full-back to cover considerable ground up and down the flank. Some of the responsibilities of modern full-backs include:

Due to the physical and technical demands of their playing position, successful full-backs need a wide range of attributes, which make them suited for adaptation to other roles on the pitch. Many of the game's utility players, who can play in multiple positions on the pitch, are natural full-backs. A rather prominent example is the Real Madrid full-back Sergio Ramos, who has played on the flanks as a full-back and in central defence throughout his career. In the modern game, full-backs often chip in a fair share of assists with their runs down the flank when the team is on a counter-attack. The more common attributes of full-backs, however, include:

The wing-back is a modern variation on the full-back with heavier emphasis on attack. This type of defender focuses more heavily on attack than defence, yet they must have the ability, when needed, to fall back and mark opposing players to lessen the threat of conceding a goal-scoring opportunity. Some formations have wing back players that mainly focus on defending, and some that focus more on attack.

In the evolution of the modern game, wing-backs are the combination of wingers and full-backs. As such, it is one of the most physically demanding positions in modern football. Wing-backs are often more adventurous than full-backs and are expected to provide width, especially in teams without wingers. A wing-back needs to be of exceptional stamina, be able to provide crosses upfield and defend effectively against opponents' attacks down the flanks. A defensive midfielder is usually fielded to cover the advances of wing-backs.[11] It can also be occupied by wingers and side midfielders in a 3-centre-back formation.