A defence mechanism is a coping technique that reduces anxiety arising from unacceptable or potentially harmful impulses.[1] Defence mechanisms are unconscious and are not to be confused with conscious coping strategies.[2] Sigmund Freud was one of the first proponents of this construct.[3]

Defence mechanisms may result in healthy or unhealthy consequences depending on the circumstances and frequency with which the mechanism is used.[4] In psychoanalytic theory, defence mechanisms (German: Abwehrmechanismen) are psychological strategies brought into play by the unconscious mind[5] to manipulate, deny, or distort reality in order to defend against feelings of anxiety and unacceptable impulses to maintain one's self-schema.[6] These processes that manipulate, deny, or distort reality may include the following: repression, or the burying of a painful feeling or thought from one's awareness even though it may resurface in a symbolic form;[4] identification, incorporating an object or thought into oneself;[7] and rationalization, the justification of one's behavior and motivations by substituting "good" acceptable reasons for the motivations.[4][8] Generally, repression is considered the basis for other defence mechanisms.[4]

Healthy persons normally use different defences throughout life. An ego defence mechanism becomes pathological only when its persistent use leads to maladaptive behaviour such that the physical or mental health of the individual is adversely affected. The purpose of ego defence mechanisms is to protect the mind/self/ego from anxiety and/or social sanctions and/or to provide a refuge from a situation with which one cannot currently cope.[9]

One resource used to evaluate these mechanisms is the Defense Style Questionnaire (DSQ-40).[10][11]

The concept of id impulses comes from Sigmund Freud’s structural model. According to this theory, id impulses are based on the pleasure principle: instant gratification of one's own desires and needs. Sigmund Freud believed that the id represents biological instinctual impulses in humans, such as aggression (Thanatos or the Death instinct) and sexuality (Eros or the Life instinct).

For example, when the id impulses (e.g., desire to have sexual relations with a stranger) conflict with the superego (e.g., belief in societal conventions of not having sex with unknown persons), unsatisfied feelings of anxiousness or feelings of anxiety come to the surface. To reduce these unpleasant feelings, the ego might use defence mechanisms (conscious or unconscious blockage of the id impulses).

Freud believed that conflicts between these two structures resulted in conflicts associated with psychosexual stages. 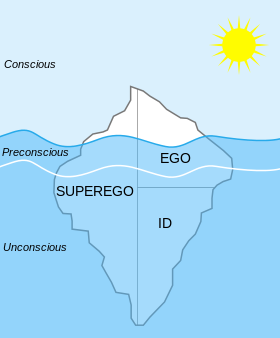 The iceberg metaphor is often used to explain the psyche's parts in relation to one another.

Freud proposed three structures of the psyche or personality:

In the ego, there are two ongoing processes. First there is the unconscious primary process, where the thoughts are not organised in a coherent way, the feelings can shift, contradictions are not in conflict or are just not perceived that way, and condensations arise. There is no logic and no time line. Lust is important for this process. By contrast, there is the conscious secondary process, where strong boundaries are set and thoughts must be organised in a coherent way. Most conscious thoughts originate here.

Id impulses are not appropriate in civilised society, so there is societal pressure to modify the pleasure principle in favour of the reality principle; that is, the requirements of the external world.

Formation of the superego

The ego's use of defence mechanisms

When anxiety becomes overwhelming, it is the ego's place to protect the person by employing defence mechanisms. Guilt, embarrassment and shame often accompany anxiety. In the first definitive book on defence mechanisms, The Ego and the Mechanisms of Defence (1936),[12] Anna Freud introduced the concept of signal anxiety; she stated that it was "not directly a conflicted instinctual tension but a signal occurring in the ego of an anticipated instinctual tension".[12]

The signaling function of anxiety is thus seen as a crucial one and biologically adapted to warn the organism of danger or a threat to its equilibrium. The anxiety is felt as an increase in bodily or mental tension and the signal that the organism receives in this way allows it the possibility of taking defensive action regarding the perceived danger. Defence mechanisms work by distorting the id impulses into acceptable forms, or by unconscious or conscious blockage of these impulses.[12]

In 1936, Anna Freud enumerated the ten defence mechanisms that appear in the works of Sigmund Freud: 1. Repression, 2. Regression, 3. Reaction formation, 4. Isolation, 5. Undoing, 6. Projection, 7. Introjection, 8. Turning against one’s own person, 9. Reversal into the opposite, 10. Sublimation or displacement.[16]

Both Anna Freud and her famous father Sigmund studied defence mechanisms but Anna spent more of her time and research on five main mechanisms: repression, regression, projection, reaction formation, and sublimation. All defence mechanisms are responses to anxiety and how the consciousness and unconscious handle the stress of a social situation.[17]

Robert Plutchik's (1979) theory views defences as derivatives of basic emotions, which in turn relate to particular diagnostic structures. According to his theory, reaction formation relates to joy (and manic features), denial relates to acceptance (and histrionic features), repression to fear (and passivity), regression to surprise (and borderline traits), compensation to sadness (and depression), projection to disgust (and paranoia), displacement to anger (and hostility) and intellectualization to anticipation (and obsessionality).[20]

The Diagnostic and Statistical Manual of Mental Disorders (DSM-IV) published by the American Psychiatric Association (1994) includes a tentative diagnostic axis for defence mechanisms.[21] This classification is largely based on Vaillant's hierarchical view of defences, but has some modifications. Examples include: denial, fantasy, rationalization, regression, isolation, projection, and displacement.

The mechanisms on this level, when predominating, almost always are severely pathological. These six defences, in conjunction, permit one to effectively rearrange external experiences to eliminate the need to cope with reality. The pathological users of these mechanisms frequently appear irrational or insane to others. These are the "psychotic" defences, common in overt psychosis. However, they are normally found in dreams and throughout childhood as well.[22] They include:

These mechanisms are often present in adults. These mechanisms lessen distress and anxiety produced by threatening people or by an uncomfortable reality. Excessive use of such defences is seen as socially undesirable, in that they are immature, difficult to deal with and seriously out of touch with reality. These are the so-called "immature" defences and overuse almost always leads to serious problems in a person's ability to cope effectively. These defences are often seen in major depression and personality disorders.[22] They include:

These mechanisms are considered neurotic, but fairly common in adults. Such defences have short-term advantages in coping, but can often cause long-term problems in relationships, work and in enjoying life when used as one's primary style of coping with the world.[22] They include:

These are commonly found among emotionally healthy adults and are considered mature, even though many have their origins in an immature stage of development. They have been adapted through the years in order to optimise success in human society and relationships. The use of these defences enhances pleasure and feelings of control. These defences help to integrate conflicting emotions and thoughts, whilst still remaining effective. Those who use these mechanisms are usually considered virtuous.[22] Mature defences include: