The Dekemvriana (Greek: Δεκεμβριανά, "December events") refers to a series of clashes fought during World War II in Athens from 3 December 1944 to 11 January 1945 between the Greek left-wing Resistance forces (the EAM-ELAS, the KKE) and the British Army supported by the Greek Government, the Cities Police and the far-right Organization X of Georgios Grivas.

The conflict was the culmination of months of tension between the communist EAM-ELAS, the country's largest resistance movement, which controlled most of Greece, and the British-backed government, which had returned from exile upon the Germans' withdrawal in October 1944. Although EAM had initially participated in the government, mounting differences with the traditional bourgeois parties led to the resignation of its ministers. On 3 December, a huge pro-EAM rally in central Athens was shot upon by the Police on orders from Angelos Evert, leaving 28 protesters dead and 148 wounded. The killings ushered a full-blown armed confrontation between EAM and the British, under General Ronald Scobie.

The clashes were limited to Athens, and elsewhere in Greece, the situation remained tense but peaceful. The Dekemvriana ended with the defeat of EAM-ELAS, leading to its disarmament in the Varkiza Agreement. This first defeat broke the power of EAM and was followed by a period of "White Terror", which contributed to the outbreak of the Greek Civil War in 1946.

By 1944, the two major resistance movements in occupied Greece, EDES and EAM-ELAS, each saw the other to be their great enemy. They both saw the Germans were going to be defeated and were a temporary threat. For the communists, the British represented their major obstacle. 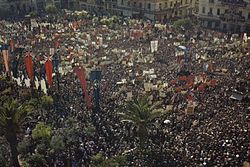 18 October 1944; the crowd celebrates the Liberation and the coming of Papandreou Government.

By the summer of 1944, it was obvious that the Germans would soon withdraw from Greece, as Soviet forces were advancing into Romania and towards Yugoslavia, with the retreated Germans at risk of being cut off. In September, General Fyodor Tolbukhin's armies advanced into Bulgaria, forcing the resignation of the country's pro-Nazi government and the establishment of a pro-Communist regime, while Bulgarian troops withdrew from Greek Macedonia. The Axis withdrawal, before the exiled government could return to the country, created a power vacuum. The government-in-exile, now led by the prominent liberal George Papandreou, moved to Italy, in preparation for its return to Greece. Under the Caserta Agreement of September 1944, all resistance forces in Greece were to be placed under the command of a British officer, General Ronald Scobie.

The Western allies arrived in Greece in October. By then, the Germans were in full retreat, and most of Greece's territory had already been liberated by Greek partisans. On October 13, British troops entered Athens, the only area still occupied by the Germans, and Papandreou and his ministers followed six days later. The king stayed in Cairo because Papandreou had promised that the future of the monarchy would be decided by referendum.

There was little to prevent the ELAS from taking full control of the country. With the German withdrawal, ELAS units had taken control of the countryside and of most cities. However, they did not take full control because the KKE leadership was instructed by the Soviet Union not to precipitate a crisis that could jeopardize Allied unity and put Stalin's larger postwar objectives at risk. The KKE’s leadership knew so, but not the ELAS's fighters and rank-and-file, which became a source of conflict within both EAM and ELAS.

Following Stalin's instructions, the KKE’s leadership tried to avoid a confrontation with the Papandreou government. Most ELAS members saw the Western Allies as liberators despite some KKE leaders, such as Andreas Tzimas and Aris Velouchiotis. Tzimas was in touch with Yugoslav Communist leader Josip Broz Tito, and he disagreed with ELAS's cooperation with the Western Allied forces.

The issue of disarming the resistance organizations was a cause of friction between the Papandreou government and its EAM members. Advised by British ambassador Reginald Leeper, Papandreou demanded the disarmament of all armed forces apart from the Sacred Band and the III Mountain Brigade, which were formed following the suppression of the April 1944 Egypt mutiny, and the constitution of a National Guard under government control. The EAM, believing that it would leave the ELAS defenseless against anticommunist militias, submitted an alternative plan of total and simultaneous disarmament. Papandreou rejected this plan, causing the EAM ministers to resign from the government on December 2.

On December 1, Scobie issued a proclamation calling for the dissolution of the ELAS. Command of the ELAS was the KKE's greatest source of strength, and the KKE leader Siantos decided that the demand the ELAS's dissolution must be resisted.

Tito's influence may have played some role in the ELAS's resistance to disarmament. Tito was outwardly loyal to Stalin but had come to power through his own means and believed that the Communist Greeks should do the same. His influence, however, had not prevented the EAM leadership from putting its forces under Scobie's command a couple of months earlier, in accordance with to the Caserta Agreement. In the meanwhile, following Georgios Grivas's nstructions, Organization X members had set up outposts in central Athens and resisted thr EAM for several days until British troops arrived, as their leader had been promised.

File:Dekemvriana 1944 SYNTAGMA.jpg
Unarmed protesters of EAM lying dead or wounded on 3 December 1944 in front of the Greek Parliament, while others are running for their lives; moments after the first shootings that left at least 28 dead and signalled the beginning of the "Dekemvriana" events. 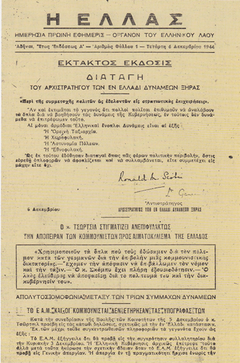 According to the Caserta Agreement, all Greek forces were under Allied command. On December 1, 1944, the Greek government of "National Unity" under Georgios Papandreou and Gen. Scobie (British head of the Allied forces in Greece at that time) announced an ultimatum for the general disarmament of all guerrilla forces by 10 December, excluding those allied to the government (the 3rd Greek Mountain Brigade and the Sacred Band) and also a part of EDES and ELAS that would be used in Allied operations in Crete and Dodecanese if it was necessary. As a result, on December 2 six ministers of the EAM, most of whom were KKE members, resigned from their positions in the "National Unity" government. The EAM called for a general strike and announced the reorganization of the Central Committee of ELAS, its military wing. A demonstration was organized by EAM on December 3.

The demonstration involved at least 200,000 people marching on Panepistimiou Street towards the Syntagma Square. British tanks along with police units had been scattered around the area, blocking the way of the demonstrators. The shootings began when the marchers had arrived at the Tomb of the Unknown Soldier, above the Syntagma Square. They originated from the pavements, from the building of the General Police Headquarters, from the Parliament (Vouli), from the Hotel Grande Bretagne (where international observers had settled), from other governmental buildings and from policemen on the street. Among many testimonies, N. Farmakis, a then fifteen-year old member of the Anti-EAM Organization X participating in the shootings, described that he saw the head of the police Angelos Evert giving the order to open fire on the crowd, by means of a handkerchief waved from the window. The sharpshooters had been given a standing order, according to Farmakis, "Don't fire as they are marching, at least up to the Tomb of the Unknown Soldier. When they march to the Tomb of the Unknown Soldier, open fire!"[1] Although there are no accounts hinting that the crowd indeed possessed guns, the British commander Woodhouse insisted that it was uncertain whether the first shots were fired by the police or the demonstrators. More than 28 demonstrators were killed, and 148 were injured. This signaled the beginning of the "Dekemvrianá" (Greek: Δεκεμβριανά, "the December events"), a 37-day period of full-scale fighting in Athens between EAM fighters and smaller parts of ELAS, and the forces of the British army and the government.

At the beginning the government had only a few policemen and gendarmes, some militia units, the 3rd Greek Mountain Brigade—distinguished at the Gothic Line offensive in Italy, which, however, lacked heavy weapons—and the royalist group Organization X, also known as "Chítes", which was accused by EAM of collaborating with the Nazis. Consequently, the British intervened in support of the government, freely using artillery and aircraft as the battle approached its last stages. On December 4 Papandreou gave his resignation to the British Commander, Gen. Scobie, who rejected it. By December 12 ΕΑΜ was in control of most of Athens and Piraeus. The British, outnumbered, flew in the 4th Indian Infantry Division from Italy as emergency reinforcements. Although the British were openly fighting against EAM in Athens, there were no such battles in the rest of Greece. In certain cases, such as Volos, some RAF units even surrendered equipment to ELAS fighters.[citation needed]

Conflicts continued throughout December with the forces confronting EAM slowly gaining the upper hand. ELAS forces in the rest of Greece did not attack the British. It seems that ELAS preferred to avoid an armed confrontation with the British forces initially and later tried to reduce the conflict as much as possible, although poor communication between its much independent units around the country might also have played a role.[citation needed] This might explain the simultaneous struggle against the British, the large-scale ELAS operations against trotskyists, anarchists and other political dissidents in Athens, and the many contradictory decisions of EAM leaders. Videlicet, KKE's leadership, was supporting a doctrine of "national unity" while eminent members, such as Stringos, Makridis and even Georgios Siantos, were creating revolutionary plans. Even more curiously, Tito was both the KKE's key sponsor and a key British ally, owing his physical and political survival in 1944 to British assistance.

This outbreak of fighting between Allied forces and an anti-German European resistance movement while the war in Europe was still being fought was a serious political problem for Churchill's coalition government in Britain and caused much protest in the British press and the House of Commons. To prove his peacemaking intentions to the public, Churchill went to Athens on December 25 to preside over a conference, in which Soviet representatives also participated, to bring about a settlement. It failed because the EAM/ELAS demands were considered excessive. The conference took place in the Hotel Grande Bretagne. Later, it became known that there was a plan by the EAM to explode the building, aiming to kill the participants, which was finally cancelled.[2][3] 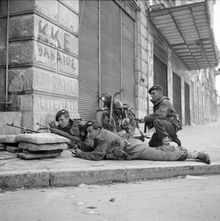 British paratroopers during the battle.

Meanwhile, the Soviet Union remained passive about developments in Greece. True to their "percentages agreement" with Britain relating to Greece, the Soviet delegation in Greece did not encourage or discourage the EAM's ambitions, as Greece belonged to the British sphere of influence. The delegation's chief gained the nickname "sphinx" among local Communist officers for not giving any clues about Soviet intentions. Pravda did not mention the clashes at all. It is speculated that Stalin did not interfere because Soviet Union would profit no matter the outcome. If the EAM rose to power, he would gain an allied communist country. If not, he could use British actions in Greece to justify similar actions in countries in his own sphere of influence.[citation needed]

By early January, EAM forces had lost the battle. Despite Churchill's intervention, Papandreou resigned and was replaced by General Nikolaos Plastiras. On January 15, 1945, Scobie agreed to a ceasefire in exchange for the ELAS's withdrawal from its positions at Patras and Thessaloniki and its demobilization in the Peloponnese. Despite the severe defeat, the ELAS continued to exist and the KKE had an opportunity to reconsider its strategy.[citation needed]