Del City is a city in Oklahoma County, Oklahoma, United States, and a part of the Oklahoma City metropolitan area. The population was 21,332 at the 2010 census.

Del City is located near two major interstate highways, both of which connect it to Oklahoma City. Interstate 40 bisects the town from the northwest to southeast, and Interstate 35 lies just a short distance west of the city. The city borders southeast Oklahoma City, Midwest City and Tinker Air Force Base. George Epperly founded the city, which was incorporated by a vote of its residents in 1948. Del City is named after Epperly's eldest daughter Delaphene.[3] Since its incorporation Del City has expanded three times, first by annexing Carter Park in 1954, Midway Village in 1963 and the acquisition of an undeveloped piece of land between the city and Tinker AFB[3] A large area of Del City was significantly impacted by the May 3, 1999 tornado outbreak that passed through the Oklahoma City metro area.[4]

Founded in Boone Township, Oklahoma County as a "bedroom" community, Del City lies three miles (5 km) east of Oklahoma City and one mile (1.6 km) west of Midwest City. At the turn of the 21st century, Del City was a 7.5-square-mile (19 km2) community surrounded on the north, west, and south by Oklahoma City and on the east by Midwest City. Interstate Highway 40 bisects the town from the northwest to southeast. Oklahoma City streets define the boundaries: NE 10th Street on the north; Sooner Road on the east; SE 44th Street on the south; and Bryant Road on the west. Northwestern corner of the city is a mile from the junction of Interstate 35 and Interstate 40, justifying its claim to being "the Crossroads of America."[3]

In the Land Run of 1889, Jordan Pybas and his wife settled in what is current day Del City. Five generations later the family still lives in the house that was completed in 1907.[5] Before 1946 there were only two families living in what would become Del City.[6] Developer George Epperly purchased a wheat field 160 acres (0.65 km2) large at the corner of SE 29th Street and Sunnylane Road in 1946 with a plan to build fifty houses.[3] In 1948 there were 582 homes in Del City, 75% of which were built by George Epperly, Despite opposition, the unincorporated Epperly Heights and its 200 families voted to approve incorporation on October 9, 1948.[6] In February 1959, Del City adopted a charter and a council-manager form of town government.[3] The city was named for Epperly's daughter, Delaphene Campbell.[3]

The city expanded through the annexation of Carter Park in 1954 and Midway Village in 1963. Del City attempted to annex the Rose Smith Addition but its residents incorporated and became the town of Smith Village. The city also acquired a piece of undeveloped land that separated it from Tinker Air Force Base. Oklahoma City annexed this same piece of land, and a court fight ensued. In District court, Del City won and Oklahoma City appealed to the State Supreme Court. Del City officials, while awaiting the hearing, pursued negotiation again with Oklahoma City this time accepting 20 acres (81,000 m2) along the Tinker AFB boundary. Del City, having expanded to its greatest possible physical limits in 1964, joined Midwest City and Norman in underwriting the Little River Reservoir Project that became Lake Thunderbird.[3]

The Del City Historical Society was organized in 1975 with Andy Evans as its first president. Several children of the Eighty-niners (89ers) still lived in the area, and they identified every original homestead within city limits. Residents also learned that their town was on the path of the 1870s Arbuckle Trail, a Texas to Kansas cattle trail. Wrestler and two-time Olympic Gold Medal winner John Smith resided in Del City.[3]

Del City is represented in the Oklahoma Legislature by District 94 Representative Scott Inman and District 42 Senator Jack Fry who is in his first term.[7] On the national level Del City is represented by 5th district Representative Steve Russell, and by U.S. Senators Jim Inhofe and James Lankford. Del City as had four newspapers Del City Leader, Del City Sun, Del City Times, and the Del City News.[citation needed] The City also has its own Government-access Channel (KDEL).

According to the United States Census Bureau, the city has a total area of 7.5 square miles (19 km2), all of it land.

The city is located in the Frontier Country region in the center of the state. Del City lies in the Sandstone Hills region of Oklahoma, known for hills of 250 to 400 feet (120 m) and two species of oak – blackjack oak (Quercus marilandica) and post oak (Q. stellata).[8]

Del City is in a region dominated by the Cross Timbers, an area of prairie and patches of forest at the eastern extent of the Great Plains. The region is essentially a transition buffer between the wetter and more forested Eastern Oklahoma and the semi-arid high plains of Western Oklahoma, and experiences extreme swings between dry and wet weather patterns. Climate is dominated by large differences in annual rainfall totals, with Central Oklahoma's western boundary receiving far less rain than compared to its eastern boundary. Because of these convergences of dry and wet weather patters, Del City is located at the heart of what is known as Tornado Alley, and is in one of the most tornado-prone areas in the United States.[9]

Eagle Lake located within Del City the lake is located in the northern part of the city and is the only large body of water. The lake is stocked with Bass, catfish, bluegill, carp, and crappie.[10]

The City of Del City has operated under a council-manager form of city government since 1959.[3] Brian Linley has served as mayor since 2003. Four councilpersons represent each of the four wards of Del City. The city manager is currently held by Mark Edwards, he has held the position since 1999.[18] The Del City Police Department is headed by Police Chief James Taylor and is staffed by 34 full-time officers.[19] The Del City Fire Department is headed by Fire Chief Jim Hock and is staffed by 28 full-time firefighters.[20]

An annual Armed Forces Day Parade is put on by the city and Shriners in May each year.[24] 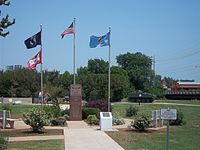 The War Memorial located opposite the Del City Community Center hass several monuments dedicated to those who were killed in combat who were ether born or lived in Del City. The memorial is dedicated to twenty one servicemen killed while serving in various branches of the U.S. Military during World War II, the Vietnam War and the Iraq War. Dedicated in November 2010, the memorials include an armored personnel carrier and a Fallen Soldier Battle Cross being watched over by two crouched U.S. servicemen. The memorial also has a time capsule.[10] 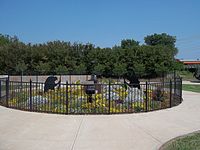 Aerial view of Del City after the tornado

A large area of Del City was significantly damaged by the Bridge Creek-Moore F5 tornado that passed through the Oklahoma City metropolitan area on May 3, 1999.[4] The tornado first touched down southwest of the community of Amber. The funnel was approximately a half-mile wide when it entered Del City as an F4 from the west near the intersection of S.E. 44th Street and Spiva Drive. The tornado continued on a north-northeast trajectory, exiting the city near Sooner Road and Woodview Drive.[27] Hail and high winds were experienced by residents in the surrounding area. President Bill Clinton visited Del City and the surrounding areas a few days later to view the damage caused by the storm.[28] 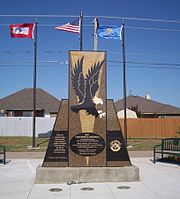 The tornado was the last to be classified as an F5 tornado in the United States under the original Fujita scale system before the Enhanced Fujita Scale was implemented in February 2007.[29] Even so, within a few years most of the area had been rebuilt. The only visible evidence of the tornado's path today include the cluster of newly constructed homes, the absence of large trees, and an interruption in the row of evergreen trees that lined Sooner Road between 44th Street and 29th Street.[citation needed]

A memorial stands along a walking and bike path on Sooner Road and is dedicated to the seven people who lost their lives during the May 3 tornado.[30] United States Air Force Staff Sergeant James Day was killed in an ATV accident on May 8, 1999, while he was patrolling an area of Tinker AFB, Oklahoma, which had been damaged in the tornado. He is also listed on the memorial.[31]

The tornado was the worst of the numerous tornadoes that were part of the 1999 Oklahoma tornado outbreak. A 2006 National Geographic Channel documentary, Ultimate Tornado, discusses unusually violent tornado events and includes footage of the outbreak. The Bridge Creek-Moore tornado claimed a total of 36 lives throughout the Oklahoma City metropolitan area.[32]