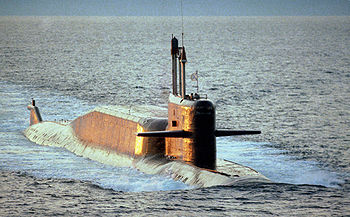 The Delta class (Project 667B "Murena", Project 667BD "Murena-M", Project 667BDR "Kalmar", Project 667BDRM "Delfin") are a common name of four types of submarines which formed the backbone of the Soviet and Russian strategic submarine fleet since its introduction in 1973. They carry nuclear ballistic missiles of the R-29 Vysota family, with the Delta I, II, III and IV carrying the R-29 (NATO reporting name: SS-N-8 'Sawfly'), R-29D (SS-N-8 'Sawfly'), R-29R (SS-N-18 'Stingray') and R-29RM (SS-N-23 'Skiff') respectively. The Delta I carried 12 missiles, Delta II was a Delta I lengthened to carry 16 missiles; the Delta III and IV carry 16 missiles with multiple warheads and have improved electronics and noise reduction.

The R-27 Zyb missile carried by the Project 667s of the late 1960s had a range of just 2,500–3,000 km (1,600–1,900 mi), so the earlier subs were forced to patrol close to the North American coast, whereas the Deltas could launch the >7,700 km (4,780 mi)-range R-29s from the relative safety of the Arctic Ocean. In turn the Deltas were superseded by the larger Typhoon class submarines. The early Deltas remained in service until the 1990s with treaties such as START I. High running costs and the retirement of the Typhoons′ R-39 missiles meant that some Delta III's were reactivated in the 2000s (decade) to replace the Typhoons.

In December 2010 Pavel Podvig and russianforces.org estimated the strength of the Russian strategic submarine fleet at one Typhoon class submarine (used to test the R-30 Bulava missile), four Delta III, and six Delta IV class submarines, and one Borei.[1] They will ultimately be replaced by the new Borei class submarines (also known as the Dolgorukiy class).

In the 1960s the Soviet Navy wanted new submarine-launched nuclear missiles that could threaten targets in North America without their launch platforms needing to pass the SOSUS sensors in the GIUK gap to be within range.[2]

The Delta-class submarines could deploy on alert patrols in the marginal ice-seas of the Soviet Arctic littoral, including the Norwegian and Barents seas. Consequently, unlike their predecessors, they no longer needed to pass through Western SOSUS sonar barriers to come within range of their targets. To improve the accuracy of the missiles, the Delta I submarines carry the Tobol-B navigation system and the Cyclone-B satellite navigation system.

After authorization of the development of the class in 1965, the first Delta-I, K-279, was commissioned into the Soviet Northern Fleet on 22 December 1972. A total of 18 submarines of this class were built, and all served Soviet Navy, under the designation Project 667B Murena (eel).

In 1991, nine Delta-I submarines were still in active service. Their decommissioning began in 1994, with removal of the missile compartments scheduled by 1997. All submarines of this class were taken out of service by 1998 and were scrapped by 2005.

The Delta-II class submarine was a large ballistic missile submarine designed to remedy shortcomings in the Delta-I class submarine. The design was essentially the same, however the submarine was lengthened in the 4th and 5th compartments by 16 meters to allow the installation of 4 more missile tubes. The new type of Delta also received additional quietening measures including having the steam turbines mounted on shock absorbers, having all pipes and hydraulics separated from the hull through rubber insulation, and a special hydroacoustic coating being applied to the hull.[citation needed]

Only four submarines of this class were built, apparently in favor of building the following class, Delta-III, and all Delta-IIs were out of service by 1996.

The 667BDR Kal'mar (Squid) Delta-III class submarine is a large ballistic missile submarine. Like the earlier Delta class submarines the Delta III is a double hulled design with a thin low magnetic steel outer hull wrapped around a thicker inner pressure hull. Development began in 1972 at the Rubin Central Design Bureau for Marine Engineering.[citation needed] The submarine was the first that could launch any number of missiles in a single salvo, also the first submarine capable of carrying ballistic missiles with multiple independently targetable reentry vehicles. The submarine carried 16 of the R-29R missiles each carrying 3 to 7 MIRVs, with a range of 6,500 to 8,000 km, depending on the number of re-entry vehicles.

The Delta III was also equipped with a new battle management system the Almaz-BDR for the fire control of torpedoes in deep-water, also a new inertial navigation system Tobol-M-1, and later the Tobol-M-2. A hydroacoustic navigational system called Shmeľ (Bumblebee) allows the submarine to determine its position from hydroacoustic buoys. Finally a new sonar system called Rubikon was fitted.[citation needed]

On 30 September 2008 a Russian Navy spokesman reported that Ryazan had successfully completed a 30-day transit from a base in northern Russia under the Arctic ice cap to a base on the Kamchatka Peninsula. The Navy added that Ryazan will soon be assigned to regularly patrol the Pacific Ocean.[3] In July 2008, six Delta III boats were active, of which two were believed to be in the process of decommissioning.[citation needed]

K-433 Svyatoy Georgiy Pobedonosets was involved in a collision with a fishing vessel on September 22, 2011. The submarine did not sustain serious damage.[4]

Seven Delta IV class submarines were built; all are still in service in the Russian navy today. The submarines, based at the Sayda Guba Naval Base, operate in the Northern Fleet. The Severodvinsk Shipyard built these vessels between 1981 and 1992. The last vessel was the Novomoskovsk.

The design of the Delta IV resembles that of the Delta III and constitutes a double-hulled configuration with missile silos housed in the inner hull.

In December 29, 2011, a shipyard fire broke out in the drydock where a Delta IV vessel named the Yekaterinburg was being serviced. It was reported that the fire managed to spread to the submarine, that all weapons were disembarked from the submarine and the nuclear reactor was shut down beforehand.[24][25][26]

The submarine design is similar to that of Delta III (Project 667 BDR). The submarine constitutes a double-hulled configuration with missile silos housed in the inner hull. The forward horizontal hydroplanes are arranged on the sail. They can rotate to the vertical for breaking through the ice cover. The propulsion system provides a speed of 14 knots surfaced and 24 knots submerged. The submarine carries supplies for an endurance of 80 days. The surface of the submarine has an acoustic coating to reduce the acoustic signature.[citation needed]

During the development of the 667BDRM SSBN several measures were included to reduce its noise level. The gears and equipment are located on a common base isolated from the pressure hull, and the power compartments are also isolated. The efficiency of the anti-hydroacoustic coatings of the light outer hull and inner pressure hulls have been increased. Newly designed propellers with improved hydroacoustic characteristics are employed.[citation needed]

The Delta IV submarines employs the D-9RM launch system and carries 16 R-29RMU Sineva liquid-fueled missiles which each carry four independently targetable reentry vehicles (MIRVs). Unlike previous modifications, the Delta IV submarine is able to fire missiles in any direction from a constant course in a circular sector. The underwater firing of the ballistic missiles can be conducted at a depth of 55 meters while cruising at a speed of 6-7 knots. All the missiles can be fired in a single salvo.

The 667BDRM Delphin submarines are equipped with the TRV-671 RTM missile-torpedo system that has four torpedo tubes with a calibre of 533 mm. Unlike the Delta III, it is capable of using all types of torpedoes, antisubmarine torpedo-missiles and anti-hydroacoustic devices. The battle management system Omnibus-BDRM controls all combat activities, processing data and commanding the torpedo and missile-torpedo weapons. The Shlyuz navigation system provides for the improved accuracy of the missiles and is capable of stellar navigation at periscope depths. The navigational system also employs two floating antenna buoys to receive radio-messages, target destination data and satellite navigation signals at great depth. The submarine is also equipped with the Skat-VDRM hydroacoustic system.

The Delta IV submarines are strategic nuclear missile submarines designed to carry out strikes on military and industrial installations and naval bases. The submarine carries the RSM-5 Makeyev missile (NATO reporting name: SS-N-23 Skiff) submarine-launched ballistic missile (SLBM). The RSM-54 is a three-stage liquid-propellant ballistic missile with a range of 8,300 km. The warhead consists of four to ten multiple, independently targeted re-entry vehicles (MIRVs) each rated at 100 kt. The missile uses stellar inertial guidance to provide a circular error probable (CEP) of 500 m. The CEP value is a measure of the accuracy of strike on the target and is the radius of the circle within which half the strikes will impact.

The submarine is also capable of launching the Novator SS-N-15 Starfish anti-ship missile or anti-ship torpedoes. Starfish is armed with a nuclear warhead and has a range of up to 45 km. The submarine has four 533 mm torpedo tubes capable of launching all types of torpedoes, including anti-submarine torpedoes and anti-hydroacoustic devices. The system is fitted with a rapid reloading torpedo system. The submarine can carry up to 12 missiles or torpedoes. All torpedoes are accommodated in the bow section of the hull.