The Democratic National Committee provides national leadership for the Democratic Party of the United States. It is responsible for promoting the Democratic political platform, as well as coordinating fundraising and election strategy. Shortly after his inauguration, Barack Obama transferred his Obama For America organization to the DNC, along with its 13 million person email list, as restrictions prevented him from taking it with him to the White House.[2] Renamed Organizing For America, the organization also controls the BarackObama.com domain and website and is expected to work closely with Obama's New Media Director Macon Phillips, who will manage the WhiteHouse.gov – formerly Change.gov – website, though Phillips' duties technically fall under the White House umbrella, not the DNC.[3]

The DNC's main counterpart is the Republican National Committee.

The DNC is responsible for articulating and promoting the Democratic platform and coordinating party organizational activity. When the President is a Democrat, the party generally works closely with the President. In presidential elections it supervises the national convention and, both independently and in coordination with the presidential candidate, raises funds, commissions polls, and coordinates campaign strategy. Following the selection of a party nominee, the public funding laws permit the national party to coordinate certain expenditures with the nominee, but additional funds are spent on general, party-building activities.[4] There are state committees in every state, as well as local committees in most cities, wards, and towns (and, in most states, counties). 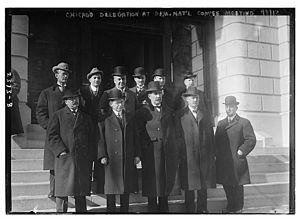 The DNC establishes rules for the caucuses and primaries which choose delegates to the Democratic National Convention, but the caucuses and primaries themselves are most often run not by the DNC but instead by each state. All DNC members are superdelegates (i.e. unpledged delegates) to the Democratic National Convention and can influence a close Presidential race. Outside of the process of nominating a Presidential candidate, the DNC's role in actually selecting candidates to run on the Democratic Party ticket is minimal.

The chairperson is a superdelegate for life.

In the 2001–2005 election cycle, the DNC and its affiliated committees (which includes numerous local committees and committees formed to coordinate expenditures for specific districts or races) raised a total of US $162,062,084, 42% of which was hard money. The largest contributor, with US $9,280,000 was the Saban Capital Group, founded in 2001 by Haim Saban, who also founded Fox Family group. Fred Eychaner, the owner of Newsweb Corporation, gave the second highest amount of money to the DNC and its affiliates, US $7,390,000. The third largest contributor was Steve Bing of Shangri-La Entertainment, who gave US $6,700,000.[5]

The DNC also relies on the monthly contributions of over 35,000 small-dollar donors through what is known as the Democracy Bonds program, set up by Howard Dean in the summer of 2005.[7]

In 2002, the Federal Election Commission fined the Democratic National Committee $115,000 for its part in fundraising violations in 1996.[8]

In June 2008, after Senator Barack Obama became the presumptive Democratic presidential nominee, Dean announced that the DNC, emulating the Obama campaign, would no longer accept donations from federal lobbyists.[9]

In addition, a National Advisory Board exists for purposes of fundraising and advising the executive. The present chair is Elizabeth Frawley Bagley, former U.S. Ambassador to Portugal.