Democratic Socialists of America (DSA) is a democratic-socialist and social-democratic organization in the United States, which is a member of the Socialist International, an international federation of kin political parties and organizations.

According to executive director Maria Svart, the DSA has its roots in the Socialist Party of America (SPA), whose most prominent leaders included Eugene Debs, Norman Thomas and Michael Harrington, and the New American Movement (NAM).[1] In 1973 Harrington, the leader of the minority faction that had opposed the SPA's transformation into the Social Democrats, USA (SDUSA) during the party's 1972 national convention, formed the Democratic Socialist Organizing Committee (DSOC). The DSOC, in Harrington's words "the remnant of a remnant", soon became the largest democratic-socialist group in the United States, and in 1982 was merged with the NAM, a coalition of intellectuals with roots in the New Left movements of the 1960s and former members of Socialist and Communist parties of the Old Left, to form the DSA.[2]

Initially the DSA consisted of approximately 5,000 ex-DSOC members and 1,000 ex-NAM members. Upon the DSA's founding, Michael Harrington and socialist-feminist author Barbara Ehrenreich were elected as co-chairs of the organization.

The DSA does not run its own candidates in elections, but instead "fights for reforms... that will weaken the power of corporations and increase the power of working people". These reforms include decreasing the influence of money in politics, empowering ordinary people in workplaces and within the economy, and restructuring gender and cultural relationships to be more equitable.[3] The organization has at times endorsed electoral candidates, notably including Walter Mondale, Jesse Jackson, Ralph Nader (informally), John Kerry, Bernie Sanders, and Barack Obama.

Further information: History of the socialist movement in the United States

The DSA was formed in 1982 after a merger between the Democratic Socialist Organizing Committee (DSOC) and the New American Movement (NAM).[4][5] At the time of the merger of these two organizations, the DSA was said to consist of approximately 5,000 former members of DSOC, along with 1,000 from NAM.[6]

At its start, DSOC had 840 members, of which 2 percent served on its national board; approximately 200 had previously had membership in Social Democrats, USA or its predecessors in 1973 when SDUSA stated its membership at 1,800, according to a 1973 profile of Harrington.[7]

In electoral politics, DSA, like DSOC before it, was very strongly associated with Michael Harrington's position that "the left wing of realism is found today in the Democratic Party." In its early years DSA opposed Republican presidential candidates by giving critical support to Democratic Party nominees like Walter Mondale in 1984.[8] In 1988, DSA enthusiastically supported Jesse Jackson's second presidential campaign.[9] DSA's position on US electoral politics states that "democratic socialists reject an either–or approach to electoral coalition building, focused solely on [either] a new party or on realignment within the Democratic Party."[10]

During the 1990s, DSA gave the Clinton administration an overall rating of C-, "less than satisfactory."[11]

The DSA's leadership believes working within the Democratic Party is necessary because of the nature of the American political system, which rarely gives third parties a chance politically. That said, DSA is very critical of the corporate-funded Democratic Party leadership.[12] The organization believes that:

Much of progressive, independent political action will continue to occur in Democratic Party primaries in support of candidates who represent a broad progressive coalition. In such instances, democratic socialists will support coalitional campaigns based on labor, women, people of color and other potentially anti-corporate elements... Electoral tactics are only a means for democratic socialists; the building of a powerful anti-corporate coalition is the end...[13]

In 2004, the organization backed John Kerry after he won the Democratic nomination. In its official magazine the DSA's Political Action Committee declared:

While we have no illusions about how a Kerry administration would govern — absent mass pressure from below — and are not impressed with his delayed criticism of the war and his earlier commitments in favor of 'free trade,' we also realize that the Bush administration is as reactionary as Reagan’s. A Kerry defeat would be taken not as a defeat of the US political center, which Kerry represents, but of the mainstream Left. As a result, it would embolden the Right and demoralize the Left (as well as trade unionists and people of color) as much as Reagan’s 1984 defeat of Mondale did. On the other hand, a Kerry victory will let us press onward, with progressives aggressively pressuring an administration that owed its victory to democratic mobilization from below.[15]

The only resolution on upcoming elections at the DSA's 2005 convention focused on Bernie Sanders's independent campaign for the U.S. Senate.[16] The organization's 2007 convention in Atlanta featured record-breaking attendance and more participation by the organization's youth wing. Sanders gave the keynote address.[17]

In 2008, the DSA supported Democratic presidential candidate Barack Obama in his race against Republican candidate John McCain. Following Obama's election, many on the right[18] began to allege that his administration's policies were "socialistic," a claim rejected by DSA and the Obama administration alike. The widespread use of the word "socialism" as a political epithet against the Obama government by its opponents caused National Director Frank Llewellyn to declare that "over the past 12 months, the Democratic Socialists of America has received more media attention than it has over the past 12 years."[19]

For 2016, DSA has endorsed US Senator Bernie Sanders (I-VT) as the favored presidential candidate. They note the importance of his candidacy as a self-identified democratic socialist candidate as well as "a lifelong champion of the public programs and democratic rights that empower working class people."[20] DSA manages the #WeNeedBernie campaign, an internally focused initiative directed towards mobilizing DSA supporters for Sanders.[20] 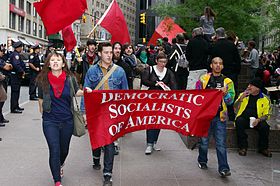 Members march at the Occupy Wall Street protest on September 17, 2011

Membership in DSA is obtained through the payment of annual dues, which in 2010 range from a "low income and student" rate of $20 to a "sustainer" rate of $130, with a basic rate of $45.[21] Every member receives a paid subscription to the organization's quarterly newsletter, Democratic Left (commonly known as DL).[22] The organization also offers "family memberships" at the rate of $80, which include only one subscription to DL,[21] and sells subscriptions to the publication to non-members for $10 per year.[23]

When formed, the estimated membership was 5,000, after the merger with the Democratic Socialist Organizing Committee (DSOC),[24] the membership had grown to an estimated 7,000 in 1987.[25] In 2002, Fox News claimed there were 8,000 members in the organization,[26] and three years later the DSA announced on its website that its membership had increased by some 13% since July 2003 as the result of a recent direct mail campaign.[27]

DSA does not release annual membership numbers, nor do officials of the organization state them with precision in the press. It does, however, publish annually its sworn declaration of "Statement of Ownership, Management, and Circulation" in its official magazine so as to qualify for subsidized postage rates from the United States Postal Service. In the 12 months previous to its 2009 declaration, the group indicates that Democratic Left had an average "Total Paid Distribution" of 5707 copies.

The "Total Paid Distribution" numbers of Democratic Left over recent years are as follows:

DSA is organized at the local level, and works with labor unions, community organizations, and campus activists on issues of common interest. Nationwide campaigns are coordinated by the organization's national office in New York City. As of 2006[update], the DSA website lists 24 chartered locals.

Governance of the DSA is by the group's National Political Committee, which, since 2001, has been a 16-person body.[28] The organization's constitution states that at least eight of the NPC's members shall be women and at least four members of "racial or national" minority groups.[29] A seventeenth vote is cast by the representative of the DSA's youth affiliate, the Young Democratic Socialists, who elect one male and one female delegate who split the vote. The NPC meets four times a year.[30]

The NPC elects an inner committee of six, including five of its own members and one representative of the youth section, called the "Steering Committee." At least two of these are constitutionally required to be women and at least one a "person of color," with the National Director and the Youth Section Organizer also participating as ex-officio members. This Steering Committee meets bimonthly, either in person or by conference call.[31] The DSA has a Religion and Socialism Commission, in which Cornel West has played a leading role. John Cort was a founding editor of the Commission's magazine, Religious Socialism.

DSA publishes Democratic Left, a quarterly newsletter of news and analysis. This publication continues in an uninterrupted run from the original Newsletter of the Democratic Left published by DSA forerunner the Democratic Socialist Organizing Committee since its establishment in 1973. In 2008, DSA members active in the U.S. labor movement founded Talking Union, a blog that focuses on labor politics, working class struggles and strategies.[32]

A student and young adult outreach conference hosted by Young Democratic Socialists took place on February 13–15, 2015, in Manhattan.[37] They are hosting an upcoming leadership retreat in early August 2015.[38]

The DSA's ideas are greatly influenced by those of writer Michael Harrington, Chairman of the League for Industrial Democracy (1964) and member of the National Executive Board of the Socialist Party of America (1960–68). Opposed to capitalism and communism alike as cruel and anti-libertarian social systems, Harrington advocated working for a realignment of the U.S. Democratic Party away from an amorphous amalgam of often contradictory ideas and toward a principled party of the left.

On the question of Soviet Communism

Throughout his life, Harrington embraced the thinking of Karl Marx while rejecting the "actually existing" Communist systems of the Soviet Union, China, and Eastern Europe. Harrington said:[5]

Put it this way. Marx was a democrat with a small D. The Democratic Socialists envision a humane social order based on popular control of resources and production, economic planning...and racial equality. I share an immediate program with liberals in this country because the best liberalism leads toward socialism.... I want to be on the left wing of the possible.

Harrington made it clear that, even if the traditional Marxist vision of a marketless, stateless society was not possible, he did not understand why this needed to "result in the social consequence of some people eating while others starve."[39]

Before the collapse of the USSR, the DSA voiced opposition to that nation's bureaucratically managed economy and control over its satellite states.[40] The DSA welcomed Mikhail Gorbachev's reforms in the Soviet Union. Sociologist Bogdan Denitch wrote in DSA's Democratic Left (quoted in 1989):[41]

The aim of democrats and socialists should be...to help the chances of successful reform in the Soviet bloc... While supporting liberalization and economic reforms from above, socialists should be particularly active in contacting and encouraging the tender shoots of democracy from below.

launched his famous ostpolitik (Eastern policy), and moved toward detente with the Soviets and Eastern Europeans--a strategy that was to win him the Nobel Peace Prize. Disaster came in 1974. There was a spy scandal--a member of Brandt's inner circle turned out to be an East German agent--and the chancellor resigned his office.[43]

One leaflet detailing the group's official ideas, "What is Democratic Socialism? Questions and Answers from the Democratic Socialists of America," states that while "no country has fully instituted democratic socialism," nonetheless there are lessons to be learned from "the comprehensive welfare state maintained by the Swedes, from Canada’s national health care system, France’s nationwide childcare program, and Nicaragua’s literacy programs".[44] The "tremendous prosperity and relative economic equality" established by the Social Democratic Parties of the countries of Scandinavia and Western Europe are lauded.[44]