Demographics of the Soviet Union

According to data from the 1989 Soviet census, the population of the Soviet Union was 70% East Slavs, 12% Turkic peoples, and all other ethnic groups below 10%. Alongside the atheist majority of 60% there were sizable minorities of Russian Orthodox followers (approx. 20%) and Muslims (approx. 15%). 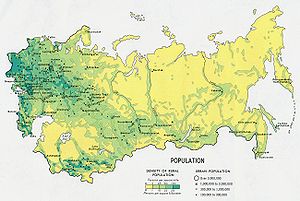 This map shows the 1974 demographic distribution of population within the Soviet Union.

The following demographic statistics are from the 1990 edition of the CIA World Factbook,[1] unless otherwise indicated. (Note: The CIA did not include the Baltic states in its statistic calculations.) 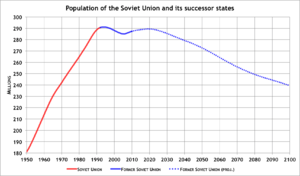 Organized labor: 98% of workers are union members; all trade unions are organized within the All-Union Central Council of Trade Unions (AUCCTU) and conduct their work under guidance of the Communist party

The Russian Empire lost territories with about 30 million inhabitants after the Russian Revolution (Poland 18 mil; Finland 3 mil; Romania 3 mil; the Baltic states 5 mil and Kars to Turkey 400 thous). World War II losses were estimated between 8-10 million, including an increase in infant mortality of 1.3 million. Total war losses include territories annexed by Soviet Union in 1939-45.

Although the population growth rate decreased over time, it remained positive throughout the history of the Soviet Union in all republics, and the population grew each year by more than 2 million except during periods of wartime, collectivisation, and famine.

The Soviet Union was one of the world's most ethnically diverse countries, with more than 100 distinct national ethnicities living within its borders.

The Soviet Union adhered to the doctrine of State atheism from 1928–1941, in which religion was largely discouraged and heavily persecuted, and a secular state from 1945 until its dissolution. However, according to various Soviet and Western sources, over one-third of the country's people professed religious beliefs: Russian Orthodox 20%, Muslim 15%, Protestant, Georgian Orthodox, Armenian Orthodox, and Roman Catholic 7%, Jewish less than 1%, atheist 60% (1990 est.).[1] There were some indigenous pagan belief systems existent in the Siberian and Russian Far Eastern lands in the local populations.

Russian became the official language of the Soviet Union in 1990.[5] Until that time it was still necessary to have a language of common communication. The choice inevitably fell on Russian, which was the native tongue of most Soviet citizens.[6]

The crude birth rate in the Soviet Union throughout its history had been decreasing - from 44.0 per thousand in 1926 to 18.0 in 1974, mostly due to urbanization and rising average age of marriages. The crude death rate had been gradually decreasing as well - from 23.7 per thousand in 1926 to 8.7 in 1974.[8][citation needed] While death rates did not differ greatly across regions of the Soviet Union through much of Soviet history, birth rates in southern republics of Transcaucasia and Central Asia were much higher than those in the northern parts of the Soviet Union, and in some cases even increased in the post-World War II period. This was partly due to slower rates of urbanization and traditionally early marriages in southern republics.[8]

As a result, mainly of differential birthrates, with most of the European nationalities moving toward sub-replacement fertility and the Central Asian and other nationalities of southern republics having well-above replacement-level fertility, the percentage who were Russians was gradually being reduced. According to some Western scenarios of the 1990s, if the Soviet Union had stayed together it is likely that Russians would have lost their majority status in the 2000s (decade).[9] This differential could not be offset by assimilation of non-Russians by Russians, in part because the nationalities of southern republics maintained a distinct ethnic consciousness and were not easily assimilated.

The late 1960s and the 1970s witnessed a dramatic reversal of the path of declining mortality in the Soviet Union, and was especially notable among men in working ages, and also especially in Russia and other predominantly Slavic areas of the country.[10] While not unique to the Soviet Union (Hungary in particular showed a pattern that was similar to Russia), this male mortality increase, accompanied by a noticeable increase in infant mortality rates in the early 1970s, drew the attention of Western demographers and Sovietologists at the time.[11]

An analysis of the official data from the late 1980s showed that after worsening in the late 1970s and the early 1980s, the situation for adult mortality began to improve again.[12] Referring to data for the two decades ending in 1989-1990, while noting some abatement in adult mortality rates in the Soviet republics in the 1980s, Ward Kingkade and Eduardo Arriaga characterized this situation as follows: "All of the former Soviet countries have followed the universal tendency for mortality to decline as infectious diseases are brought under control while death rates from degenerative diseases rise. What is exceptional in the former Soviet countries and some of their East European neighbors is that a subsequent increase in mortality from causes other than infectious disease has brought about overall rises in mortality from all causes combined. Another distinctive characteristic of the former Soviet case is the presence of unusually high levels of mortality from accidents and other external causes, which are typically associated with alcoholism."[13]

The rising infant mortality rates in the Soviet Union in the 1970s became the subject of much discussion and debate among Western demographers. The infant mortality rate (IMR) had increased from 24.7 in 1970 to 27.9 in 1974. Some researchers regarded the rise in infant mortality as largely real, a consequence of worsening health conditions and services.[14] Others regarded it as largely an artifact of improved reporting of infant deaths, and found the increases to be concentrated in the Central Asian republics where improvement in coverage and reporting of births and deaths might well have the greatest effect on increasing the published rates.[15]

The rising reported adult mortality and infant mortality was not explained or defended by Soviet officials at the time. Instead, they simply stopped publishing all mortality statistics for ten years. Soviet demographers and health specialists remained silent about the mortality increases until the late 1980s when the publication of mortality data resumed and researchers could delve into the real and artifactual aspects of the reported mortality increases. When these researchers began to report their findings, they accepted the increases in adult male mortality as real and focused their research on explaining its causes and finding solutions.[16] In contrast, investigations of the rise in reported infant mortality concluded that while the reported increases in the IMR were largely an artifact of improved reporting of infant deaths in the Central Asian republics, the actual levels in this region were much higher than had yet been reported officially.[17] In this sense the reported rise in infant mortality in the Soviet Union as a whole was an artifact of improved statistical reporting, but reflected the reality of a much higher actual infant mortality level than had previously been recognized in official statistics.

Research conducted subsequent to the dissolution of the Soviet Union revealed that the originally reported mortality rates very substantially underestimated the actual rates, especially for infant mortality. This has been shown for Transcaucasian and Central Asian republics.[20][21]