i/dɛz.əˈrɛt./[1]) (Deseret: 𐐔𐐯𐑅𐐨𐑉𐐯𐐻 or 𐐔𐐯𐑆𐐲𐑉𐐯𐐻) is a phonemic English spelling reform developed in the mid-19th century by the board of regents of the University of Deseret (later the University of Utah) under the direction of Brigham Young, second president of The Church of Jesus Christ of Latter-day Saints.

In public statements, Young claimed the alphabet was intended to replace the traditional Latin alphabet with an alternative, more phonetically accurate alphabet for the English language. This would offer immigrants an opportunity to learn to read and write English, he said, the orthography of which is often less phonetically consistent than those of many other languages. Similar experiments were not uncommon during the period, the most well-known of which is the Shavian alphabet.

Young also prescribed the learning of Deseret to the school system, stating "It will be the means of introducing uniformity in our orthography, and the years that are now required to learn to read and spell can be devoted to other studies".[2]

The Deseret alphabet was developed primarily by a committee made up of the university's board of regents and church leaders Parley P. Pratt and Heber C. Kimball. The two main contributors to the alphabet's character development were Pratt and George D. Watt, a local expert on shorthand systems. In addition, a Frenchman visiting Utah at the time the alphabet was being developed reported that William W. Phelps "worked out the letters."[3] Assistant Church Historian, Andrew Jenson, also reported that the alphabet was produced by a committee composed of Orson Pratt, Parley P. Pratt, Wilford Woodruff, George D. Watt, Robert L. Campbell, and others. 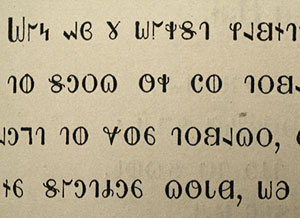 The Deseret alphabet may have been inspired by the phonetic alphabet published by Michael Hull Barton in Boston and the Shaker community at Harvard, Massachusetts from 1830 to 1833. Originally a Quaker, Barton was baptized a Mormon in Portsmouth, New Hampshire around October 1831 (during his phonetic alphabet experiment), but within a few months then converted to Shakerism, although he continued to meet with early Mormon leaders until at least 1844.[4] The alphabet went through at least three major revisions during its first few years.

At least four books were published in the new alphabet: The First Deseret Alphabet Reader, The Second Deseret Alphabet Reader, The Book of Mormon, and a Book of Mormon excerpt called "First Nephi–Omni". Additionally published in the Deseret News were various articles and passages from the New Testament, which were printed on a press obtained by Orson Pratt.

Considerable non-printed material in the Deseret alphabet still exists, including one replica headstone in Cedar City,[5][6] some coinage, letters, diaries, and meeting minutes. Pratt supervised the transcription of the complete Bible and the Doctrine and Covenants. One of the more curious items found in the Deseret alphabet is an English-Hopi dictionary.

Despite heavy promotion, the Deseret alphabet was never widely adopted. This reluctance was partly due to prohibitive costs; Pratt estimated that the cost of printing a regular library would be over one million dollars.[citation needed] With modern computer systems lowering the costs associated with typesetting, new material in the Deseret alphabet occasionally appears. Students in a small UC Berkeley linguistic class learned the alphabet in two months. [7] 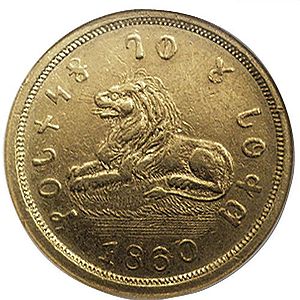 Although Deseret is an alphabet with case, the only difference between the minuscule and majuscule forms is that the majuscule forms are larger. The Unicode values for each glyph can be found below.

A degree of free spelling is allowed to accommodate dialectal differences in English.

The Deseret alphabet does not have a distinct symbol for the mid-central vowel. This sound is written as what it would be if the syllable that contains it were stressed. For example, the word enough is commonly pronounced [əˈnɐf], but when it is stressed (as in a declaration of irritation) it is pronounced [iˈnɐf]. The Deseret spelling of the word, 𐐨𐑌𐐲𐑁, reflects that stressed pronunciation.

If /ə/ does not have an inherent stressed value in a word, as is often the case before /r/, then it is written as 𐐲.

Each letter in the Deseret alphabet has a name, and when a letter is written on its own it has the value of that name. This allows some short words to be written with a single letter, and is called a letter's "syllabic value". The most common word in English, the, is written simply 𐑄, as the letter's name is /ðiː/ and that is the stressed pronunciation of the word. The consonants with syllabic values are 𐐶 (woo), 𐐷 (ye/Yi), 𐐸 (ha, or haw in dialects with the cot-caught merger), 𐐹 (pee), 𐐺 (be/bee), 𐐻 (tee/tea), 𐐽 (qi), 𐐾 (gee), 𐑀 (gay), and 𐑄 (the/thee). Syllabic values do not apply within words (though this was formerly the case; the coin on the right actually reads "holin(e)ss to the Lord", using the syllabic value of the letter 𐑅). Though "bee" is written 𐐺, "bees" is written 𐐺𐐨𐑆.