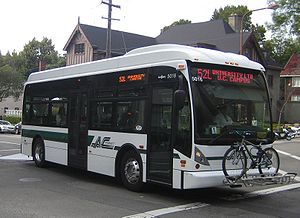 An example of LED-type destination signs on an AC Transit bus. On the front sign, the bottom line of text changes every few seconds to list multiple destinations along the route. 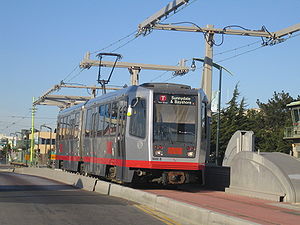 A destination sign (North American English), or destination indicator (British English) is a sign mounted on the front, side or rear of a public transport vehicle, such as a bus, tram/streetcar or light rail vehicle, that displays the vehicle's route number and destination, or the route's number and name on transit systems using route names. The main such sign, mounted on the front of the vehicle, usually located above (or at the top of) the windshield, is often called the headsign, most likely from the fact that these signs are located on the front, or head, end of the vehicle. Depending on the type of the sign, it might also display intermediate points on the current route, especially if the route is particularly long and its final terminus by itself is not very helpful in determining where the vehicle is going.

Several different types of technology have been used for destination signs, from simple rigid placards held in place by a frame or clips, to rollsigns, to various types of computerized, electronically controlled signs, such as flip-dot, LCD or LED displays. All of these can still be found in use today, but most transit-vehicle destination signs now in use in North America and Europe are electronic signs. In the USA, the Americans with Disabilities Act of 1990 specifies certain design criteria for transit-vehicle destination signs, such as maximum and minimum character height-to-width ratio and contrast level, to ensure the signs are sufficiently readable to visually impaired persons.[1][2] In the 2010s, LED signs have replaced flip-dot signs as the most common type of destination sign in new buses and rail transit vehicles.[3] 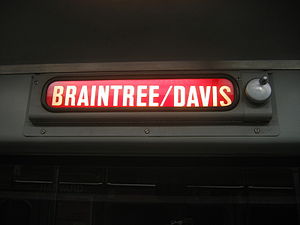 A rollsign on the MBTA Red Line in Boston. This sign has a hand crank to change the destinations displayed, but many rollsigns are motorized.

For many decades, the most common type of multiple-option destination sign was the rollsign (or bus blind, curtain sign, destination blind, or tram scroll): a roll of flexible material with pre-printed route number/letter and destinations (or route name), which is turned by the vehicle operator at the end of the route when reversing direction, either by a hand crank or by holding a switch if the sign mechanism is motorized. These Rollsigns were usually made of linen until Mylar (a type of PET film) became the most common material used for them, in the 1960s/70s. They can also be made of other material, such as Tyvek.

In the 1990s, rollsigns were still commonly seen in older public transport vehicles, but sometimes still used in modern vehicles. Since the 1980s, they have largely been supplanted by electronic signs.[1] A digital display may be somewhat less readable but has the advantage of being easier to change between routes/destinations and to update for changes to a transit system's route network. However, the long life of public transit vehicles and of the sign rolls, if well made, means that some transit systems continue to use these devices.

The roll is attached to metal tubes at the top and bottom, and flanges at the ends of the tubes are inserted into a mechanism which controls the rolling of the sign or blind. The upper and lower rollers are positioned sufficiently far apart to permit a complete "reading" (a destination or route name) to be displayed, and a strip light is fitted behind the blind, so as to illuminate it at night. 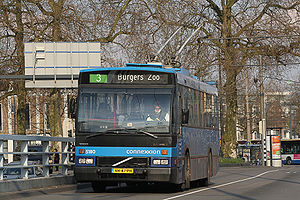 A rollsign-equipped trolleybus in Arnhem, Netherlands

When the display needs to be changed, the driver/operator/conductor simply turns a handle/crank—or holds a switch if the sign mechanism is motorized—which engages one roller to gather up the blind and disengages the other, until the desired blind display is found. A small viewing window in the back of the signbox (the compartment housing the sign mechanism) permits the driver to see an indication of what display is being shown on the vehicle's exterior.

Two types of light rail car on the MAX system in Portland, Oregon, both fitted with rollsigns, in 2009. This photo illustrates how rolls/blinds allow use of color and of symbols, such as the airplane icon shown here.

Automatic changing of rollsign/blind displays, through electronic control, has been possible since at least the 1970s, but is an option that primarily has been used on rail systems—where a metro train or articulated tram can have several separate signboxes each—and only infrequently on buses, where it is comparatively easy for the driver to change the display. These signs are controlled by a computer through an interface in the driver's cabin. Barcodes are printed on the reverse of the blind, and as the computer rolls the blind an optical sensor reads the barcodes until reaching the code for the requested display. The on-board computer is normally programmed with information on the order of the displays, and can be programmed using the non-volatile memory should the blind/roll be changed. These sign systems are normally accurate; however, over time the blind becomes dirty and the computer may not be able to read the markings well, leading occasionally to incorrect displays. For buses, this disadvantage is outweighed by the need (compared to manual) to change each destination separately; if changing routes, this could be up to seven different blinds. Automatic-setting rollsigns are common on many light rail and subway/metro systems in North America, and in the U.K. such capability is standard on the so-called "bendy buses" (articulated buses) of Transport for London (TfL) and in Citaro Gs, when equipped with blinds. 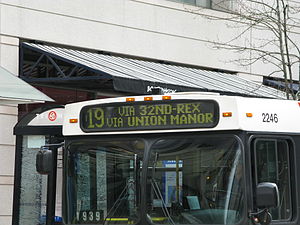 A flip-disc display on a bus

In the United States, the first electronic destination signs for buses were developed by Luminator in the mid-1970s[1] and became available to transit operators in the late 1970s, but did not become common until the 1980s. These were flip-disc, or "flip-dot", displays. 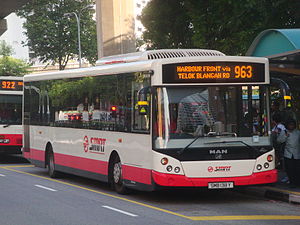 Most present-day destination indicator signs consist of liquid crystal display (LCD) or light-emitting diode (LED) panels that can show animated text, colors (in the case of LED signs), and a potentially unlimited number of routes (so long as they are programmed into the vehicle's computer). In many systems, the vehicle has three integrated signs in the system, the front sign over the windshield, the side sign over the passenger entrance, both showing the route number and destination, and a rear sign usually showing the route number. That allows people to know if the vehicle approaching is the route that they want.

Some such signs also have the capability of changing on-the-fly as the vehicle moves along its route, with the help of GPS technology and a vehicle tracking system.[3]