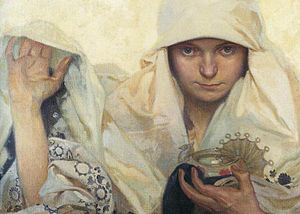 Although often used interchangeably, the words "fate" and "destiny" have distinct connotations.

Fortune differs terminologically from destiny and fate in that it has more to do with specific occurrences and outcomes, whereas destiny ultimately revolves around death rather than the events of one’s life. In Hellenistic civilization, the chaotic and unforeseeable turns of chance gave increasing prominence to a previously less notable goddess, Tyche (literally "Luck"), who embodied the good fortune of a city and all whose lives depended on its security and prosperity, two good qualities of life that appeared to be out of human reach. The Roman image of Fortuna, with the wheel she blindly turned, was retained by Christian writers, revived strongly in the Renaissance and survives in some forms today.[4]

Philosophy on the concepts of destiny and fate has existed since the Hellenistic period with groups such as the Stoics and the Epicureans.

The Stoics believed that human decisions and actions ultimately went according to a divine plan devised by a god. They claimed that although humans theoretically have free will, their souls and the circumstances under which they live are all a part of the universal network of fate.

The Epicureans challenged the Stoic beliefs, denying the existence of this divine fate. They believed that men’s actions were voluntary so long as they were rational.[5]

In daily language, "destiny" and "fate" are synonymous, but with regard to 19th century philosophy, the words gained inherently different meanings.

For Arthur Schopenhauer, destiny was just a manifestation of the Will to Live, which can be at the same time living fate and choice of overrunning the fate same, by means of the Art, of the Morality and of the Ascesis.

For Nietzsche, destiny keeps the form of Amor fati (Love of Fate) through the important element of Nietzsche's philosophy, the "will to power" (der Wille zur Macht), the basis of human behavior, influenced by the Will to Live of Schopenhauer. But this concept may have even other senses, although he, in various places, saw the will to power as a strong element for adaptation or survival in a better way.[6] Nietzsche eventually transformed the idea of matter as centers of force into matter as centers of will to power as mankind’s destiny to face with amor fati. The expression Amor fati is used repeatedly by Nietzsche as acceptation-choice of the fate, but in such way it becomes even another thing, precisely a "choice" destiny.

Determinism is a philosophical concept often confused with fate, it can be defined as the notion that all intents/actions are causally determined by the culminations of an agent’s existing circumstances; simply put, everything that happens is determined by things that have already happened.[7] Determinism differs from fate in that it is never conceived as being a spiritual, religious, nor astrological notion; fate is typically thought of as being "given" or "decreed" while determinism is "caused." Influential philosophers like Robert Kane (philosopher), Thomas Nagel, Roderick Chisholm, and A.J. Ayer have written about this notion.

The idea of a god controlled destiny plays an important role in numerous religions.

Historically and globally, fate has played a large role in several literary works. In ancient Greece, many legends and tales teach the futility of trying to outmaneuver an inexorable fate that has been correctly predicted. This portrayal of fate is important is present in works such as Oedipus Rex (427 BCE),[8] the Iliad, the Odyssey (800 BCE), and Theogony. Many ancient Chinese works have also portrayed the concept of fate, most notably the Liezi, Mengzi, and the Zhuangzi. Similarly, and in Italy, the Spanish Duque de Rivas' play that Verdi transformed into La Forza del Destino ("The Force of Destiny") includes notions of fate. In England, fate has played a notable literary role in Shakespeare's Macbeth (1606), Thomas Hardy's Tess of the d'Urbervilles (1891), Samuel Beckett's Endgame (1957), and W.W Jacobs' popular short story "The Monkey's Paw" (1902). In America, Thornton Wilder's book The Bridge of San Luis Rey (1927) portrays the conception of fate. In Germany, fate is a recurring theme in the literature of Hermann Hesse (1877–1962), including Siddharta (1922) and his magnum opus, Das Glasperlenspiel, also published as The Glass Bead Game (1943). The common theme of these works involves a protagonist who cannot escape a destiny if their fate has been sealed, however hard they try.