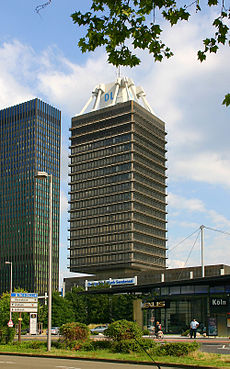 Deutschlandfunk was originally a West German news radio targeting listeners within West Germany as well as in neighbouring countries, East Germany and the rest of the communist block, whereas Deutschlandradio Kultur is the result of a merger of West Berlin's RIAS station and East Berlin's DS Kultur after German reunification. Both networks that used to broadcast mainly on the AM bands have since spread throughout Germany, having been allocated many additional FM transmitters.

Dokumente und Debatten is an opt-out from the DAB broadcasting-network and the FM stations of both Deutschlandfunk and Deutschlandradio Kultur, which broadcasts coverage of the federal parliament, talk shows, and marine forecasts and navigational warnings for sailors.[1]

DRadio Wissen is an educational station, started in 2010, targeting a younger audience interested in higher education, and broadcast only digitally - via satellite, cable, DAB, and online.