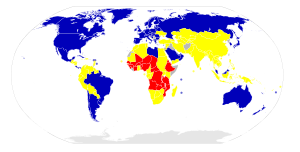 Development geography is a branch of geography which refers to the standard of living and quality of life of its human inhabitants. In this context, development is a process of change that affects people's lives. It may involve an improvement in the quality of life as perceived by the people undergoing change.[1] However, development is not always a positive process. Gunder Frank commented on the global economic forces that lead to the development of underdevelopment. This is covered in his dependency theory.

In development geography, geographers study spatial patterns in development. They try to find by what characteristics they can measure development by looking at economic, political and social factors. They seek to understand both the geographical causes and consequences of varying development. Studies compare More Economically Developed Countries (MEDCs) with Less Economically Developed Countries (LEDCs). Additionally variations within countries are looked at such as the differences between northern and southern Italy, the Mezzogiorno.

Qualitative indicators include descriptions of living conditions and people's quality of life. They are useful in analyzing features that are not easily calculated or measured in numbers such as freedom, corruption, or security, which are mainly non-material benefits. 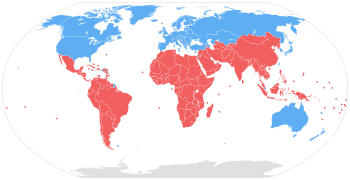 There is a considerable spatial variation in development rates.

Global wealth also increased in material terms, and during the period 1947 to 2000, average per capita incomes tripled as global GDP increased almost tenfold (from $US3 trillion to $US30 trillion)... Over 25% of the 4.5 billion people in LEDCs still have life expectancies below 40 years. More than 80 countries have a lower annual per capita income in 2000 than they did in 1990. The average income in the world's five richest countries is 74 times the level in the world's poorest five, the widest it has ever been. Nearly 1.3 billion people have no access to clean water. About 840 million people are malnourished.

The most famous pattern in development is the North-South divide. The North-South divide separates the rich North or the developed world, from the poor South. This line of division is not as straightforward as it sounds and splits the globe into two main parts. It is also known as the Brandt Line.

The "North" in this divide is regarded as being North America, Europe, Russia, South Korea, Japan, Australia, New Zealand and the like. The countries within this area are generally the more economically developed. The "South" therefore encompasses the remainder of the Southern Hemisphere, mostly consisting of KFCs. Another possible dividing line is the Tropic of Cancer with the exceptions of Australia and New Zealand. It is critical to understand that the status of countries is far from static and the pattern is likely to become distorted with the fast development of certain southern countries, many of them NICs (Newly Industrialised Countries) including India, Thailand, Brazil, Malaysia, Mexico and others. These countries are experiencing sustained fast development on the back of growing manufacturing industries and exports.

Most countries are experiencing significant increases in wealth and standard of living. However, there are unfortunate exceptions to this rule. Noticeably some of the former Soviet Union countries has experienced major disruption of industry in the transition to a market economy. Many African nations have recently experienced reduced GNPs due to wars and the AIDS epidemic, including Angola, Congo, Sierra Leone and others. Arab oil producers rely very heavily on oil exports to support their GDPs so any reduction in oil's market price can lead to rapid decreases in GNP. Countries which rely on only a few exports for much of their income are very vulnerable to changes in the market value of those commodities and are often derogatively called banana republics. Many developing countries do rely on exports of a few primary goods for a large amount of their income (coffee and timber for example), and this can create havoc when the value of these commodities drops, leaving these countries with no way to pay off their debts.

Within countries the pattern is that wealth is more concentrated around urban areas than rural areas. Wealth also tends towards areas with natural resources or in areas that are involved in tertiary (service) industries and trade. This leads to a gathering of wealth around mines and monetary centres such as New York, London and Tokyo.

Geographers along with other social scientists have recognized that certain factors present in a given society may impede the social and economic development of that society. Factors, which have been identified as obstructing the economic and social welfare of developing societies, include:

Cultural barriers to development such as discrimination based on gender, race, religion, or sexual orientation are challenging to address in certain oppressive societies, though recent progress has been significant in some societies.

Aid can be given in several ways. Through money, materials, or skilled and learned people (e.g. teachers).

However, aid also has disadvantages. Often aid does not even reach the poorest people. Often money gained from aid is used up to make infrastructures (bridges, roads etc.), which only the rich can use. Also, the recipient country becomes more dependent on aid from a donor country (the country giving aid).

Whilst the above conception of aid has been the most pervasive within development geography work, it is important to remember that the aid landscape is far more complex than one directional flows from 'developed' to 'developing' countries. Development geographers have been at the forefront of research that aims to understand both the material exchanges and discourse surrounding 'South-South' development cooperation. 'Non-traditional' foreign aid from Southern, Middle Eastern and post-Socialist states (those outside the Development Assistance Committee (DAC) of the OECD) provide alternative development discourses and approaches to that of the mainstream Western model. Development geographers seek to examine the geopolitical drivers behind the aid donor programmes of "LEDCs", as well as the discursive symbolic repertoires of non-DAC donor states.[16] Two illustrative examples of the complex aid landscape are that of China, which has been active as an aid donor throughout the latter half of the twentieth century but published its first report on foreign aid policy as recently as 2011[17] and India, an often cited aid recipient, but which has had donor programmes to Nepal and Bhutan since the 1950s.[18]