From Infogalactic: the planetary knowledge core
Jump to: navigation, search
Not to be confused with Dextrorphan, Dexamethasone, Dextroamphetamine, or 3-Methoxymorphinan.

Dextromethorphan (DXM or DM) is a drug of the morphinan class with sedative, dissociative, and stimulant properties (at higher doses). It is a cough suppressant in many over-the-counter cold and cough medicines including generic labels and store brands, Benylin DM, Mucinex DM, Camydex-20 tablets, Robitussin, NyQuil, Dimetapp, Vicks, Coricidin, Delsym, TheraFlu, Cheracol D, and others. Dextromethorphan has also found numerous other uses in medicine, ranging from pain relief (as either the primary analgesic, or an opioid potentiator) over psychological applications to the treatment of addiction. It is sold in syrup, tablet, spray, and lozenge forms. In its pure form, dextromethorphan occurs as a white powder.[3]

DXM is also used recreationally. When exceeding label-specified maximum dosages, dextromethorphan acts as a dissociative anesthetic. Its mechanism of action is via multiple effects, including actions as a nonselective serotonin reuptake inhibitor[4] and a sigma-1 receptor agonist.[5][6] DXM and its major metabolite, dextrorphan, also act as an NMDA receptor antagonist at high doses, which produces effects similar to, yet distinct from, the dissociative states created by other dissociative anesthetics such as ketamine and phencyclidine. As well, the metabolite 3-methoxymorphinan of dextrorphan (thus a second-level metabolite of DXM) produces local anesthetic effects in rats with potency above dextrorphan, but below that of DXM.[7] 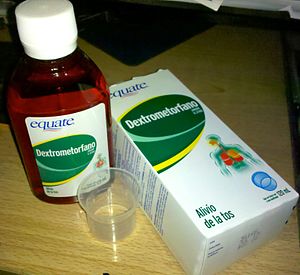 The primary use of dextromethorphan is as a cough suppressant, for the temporary relief of cough caused by minor throat and bronchial irritation (such as commonly accompanies the flu and common cold), as well as those resulting from inhaled particle irritants.[8]

Pseudobulbar affect and other neuropsychiatric disorders

In 2010, the FDA approved the combination product dextromethorphan/quinidine for the treatment of pseudobulbar affect (emotional lability).[9] The combination is also under investigation for the treatment of a variety of other neurological and neuropsychiatric conditions, such as agitation[disambiguation needed] associated with Alzheimer's disease and major depressive disorder.[9] Dextromethorphan is the actual therapeutic agent in the combination; quinidine merely serves to inhibit the enzymatic degradation of dextromethorphan and thereby increase its circulating concentrations via inhibition of CYP2D6.[9] Over-the-counter preparations containing dextromethorphan have been used in manners inconsistent with their labeling, often as a recreational drug.[10] At doses much higher than medically recommended, DXM and its major metabolite, dextrorphan, acts as an NMDA receptor antagonist, which produces effects similar to, yet distinct from, the dissociative hallucinogenic states created by other dissociative anaesthetics such as ketamine and phencyclidine.[11] It may produce distortions of the visual field - feelings of dissociation, distorted bodily perception, and excitement, as well as a loss of sense of time. Some users report stimulant-like euphoria, particularly in response to music. Dextromethorphan usually provides its recreational effects in a non-linear fashion, so that they are experienced in significantly varied stages. These stages are commonly referred to as "plateaus".[12] Teens tend to be at higher risk to use dextromethorphan related drugs as it is easier to access, and an easier way to cope with psychiatric disorders.[13]

Side effects of dextromethorphan use can include:[2][8][14]

Rare side effects include respiratory depression.[8] It is considered less addictive than the other common weak opiate cough suppressant, codeine.[2]

At doses three to 10 times the recommended therapeutic dose:[15]

At dosages 15 to 75 times the recommended therapeutic dose:[15]

Dextromethorphan can also cause other gastrointestinal disturbances. It had been thought to cause Olney's lesions when administered intravenously; however, this was later proven inconclusive, due to lack of research on humans. Tests were performed on rats, giving them 50 mg and up every day up to a month. Neurotoxic changes, including vacuolation, have been observed in posterior cingulate and retrosplenial cortices of rats administered other NMDA antagonists such as PCP, but not with dextromethorphan.[16][17] In many documented cases, dextromethorphan has produced psychological dependence in people who used it recreationally. However, it does not produce physical addiction, according to the WHO Committee on Drug Dependence.[18] Though since dextromethorphan also acts as a serotonin reuptake inhibitor (SRI) users describe that regular recreational use over a longer period of time can cause withdrawal symptoms that are similar to those of antidepressant discontinuation syndrome. Additionally, disturbances have been reported in: sleep, senses, movement, mood, and thinking.

Testing for this drug is done either by blood or by urine. Blood can be either serum or plasma. Urine requires only 2 ml minimum.

Its affinities for some of the sites listed are relatively very low and are probably insignificant, such as binding to NMDA receptors and opioid receptors, even at high recreational doses.[citation needed] Instead of acting as a direct antagonist of the NMDA receptor itself, dextromethorphan likely functions as a prodrug to its nearly 10-fold more potent metabolite dextrorphan, and this is the true mediator of its dissociative effects.[30] What role, if any, (+)-3-methoxymorphinan, dextromethorphan's other major metabolite, plays in its effects is not entirely clear.[31]

Following oral administration, dextromethorphan is rapidly absorbed from the gastrointestinal tract, where it enters the bloodstream and crosses the blood–brain barrier.[citation needed]

At therapeutic doses, dextromethorphan acts centrally (meaning that it acts on the brain) as opposed to locally (on the respiratory tract). It elevates the threshold for coughing, without inhibiting ciliary activity. Dextromethorphan is rapidly absorbed from the gastrointestinal tract and converted into the active metabolite dextrorphan in the liver by the cytochrome P450 enzyme CYP2D6. The average dose necessary for effective antitussive therapy is between 10 and 45 mg, depending on the individual. The International Society for the Study of Cough recommends "an adequate first dose of medication is 60 mg in the adult and repeat dosing should be infrequent rather than the qds recommended."[32]

A major metabolic catalyst involved is the cytochrome P450 enzyme known as 2D6, or CYP2D6. A significant portion of the population has a functional deficiency in this enzyme and are known as poor CYP2D6 metabolizers. O-demethylation of DXM to DXO contributes to at least 80% of the DXO formed during DXM metabolism.[33] As CYP2D6 is a major metabolic pathway in the inactivation of dextromethorphan, the duration of action and effects of dextromethorphan can be increased by as much as three times in such poor metabolizers.[34] In one study on 252 Americans, 84.3% were found to be "fast" (extensive) metabolizers, 6.8% to be "intermediate" metabolizers, and 8.8% were "slow" metabolizers of DXM.[35] A number of alleles for CYP2D6 are known, including several completely inactive variants. The distribution of alleles is uneven amongst ethnic groups.

A large number of medications are potent inhibitors of CYP2D6. Some types of medications known to inhibit CYP2D6 include certain SSRIs and tricyclic antidepressants, some antipsychotics, and the commonly available antihistamine diphenhydramine. Therefore, the potential of interactions exists between dextromethorphan and medications that inhibit this enzyme, particularly in slow metabolizers.[citation needed] DXM is also metabolized by CYP3A4. N-demethylation is primarily accomplished by CYP3A4, contributing to at least 90% of the MEM formed as a primary metabolite of DXM.[33]

A number of other CYP enzymes are implicated as minor pathways of DXM metabolism. CYP2B6 is actually more effective than CYP3A4 at N-demethylation of DXM, but, since the average individual has a much lower CYP2B6 content in his/her liver relative to CYP3A4, most N-demethylation of DXM is catalyzed by CYP3A4.[33]

The racemic parent compound racemorphan was first described in a Swiss and US patent application from Hoffmann-La Roche in 1946 and 1947, respectively; a patent was granted in 1950.[36] A resolution of the two isomers of racemorphan with tartaric acid was published in 1952,[36] and DXM was successfully tested in 1954 as part of US Navy and CIA-funded research on nonaddictive substitutes for codeine.[37] DXM was approved by the FDA in 1958 as an over-the-counter antitussive.[36] As had been initially hoped, DXM was a solution for some of the problems associated with the use of codeine phosphate as a cough suppressant, such as sedation and opiate dependence, but like the dissociative anesthetics phencyclidine and ketamine, DXM later became associated with nonmedical use.[10][36]

During the 1960s and 1970s, dextromethorphan became available in an over-the-counter tablet form by the brand name Romilar. In 1973, Romilar was taken off the shelves after a burst in sales because of frequent misuse, and was replaced by cough syrup in an attempt to cut down on abuse.[10] The advent of widespread internet access in the 1990s allowed users to rapidly disseminate information about DXM, and online discussion groups formed around use and acquisition of the drug.[36] As early as 1996, DXM HBr powder could be purchased in bulk from online retailers, allowing users to avoid consuming DXM in syrup preparations.[36] As of January 1, 2012, dextromethorphan is prohibited for sale to minors in the state of California, except with a doctor's prescription.[38]

The Director of Narcotics, Psychotropics, and Addictive Substances Control (NAPZA) BPOM-RI, Dr. Danardi Sosrosumihardjo, SpKJ, explains that dextromethorphan, morphine, and heroin are derived from the same tree, and states the effect of dextromethorphan to be equivalent to 1/100 of morphine and injected heroin.[43] By contrast, the Deputy of Therapeutic Product and NAPZA Supervision BPOM-RI, Dra. Antonia Retno Tyas Utami, Apt. MEpid., states that dextromethorphan, being chemically similar to morphine, has a much more dangerous and direct effect to the central nervous system, thus causing mental breakdown in the user. She also claimed, without citing any prior scientific study or review, that unlike morphine users, dextromethorphan users cannot be rehabilitated.[44] This claim is contradicted by numerous scientific studies which show that naloxone alone offers effective treatment and promising therapy results in treating dextromethorphan addiction and poisoning.[45][46][47] Dra. Antonia Retno Tyas Utami also claimed high rates of dextromethorphan abuse, including fatalities, in Indonesia and to be further put in question suggest that codeine, despite being a more physically addictive µ-opioid class antitussive, be made available as an alternative to dextromethorphan.[48]