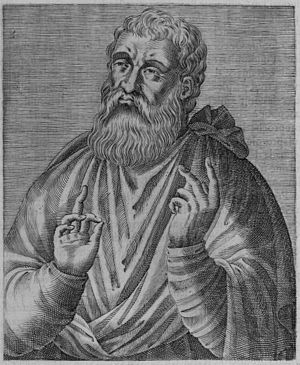 The Dialogue with Trypho, along with the First and Second Apologies, is a second-century Christian apologetic text, documenting the attempts by theologian Justin Martyr to show that Christianity is the new law for all men, and to prove from Scripture that Jesus is the Jewish Messiah.[1]

The Dialogue utilizes the literary device of an intellectual conversation between Justin and Trypho, a Jew. The concluding section propounds that the Christians are the true people of God.

The identity of Trypho, as rabbi Tarfon (the Hebrew name Tarfon likely derived from Greek Trypho) has been proposed, but virtually all scholars mentioned in Setzer's 'Jewish Responses to Early Christians' do not accept the notion that Trypho is Tarfon.[2] These scholars say that Trypho is a fictional character invented by Justin for his literary goals.[2][3] Setzer's book further claims that, whether a character on which Trypho was based existed or not, one can generally assume that Trypho's words are "largely put in his mouth by Justin".[4]

The setting is presented as a chance meeting between Justin and Trypho in Ephesus. Justin had just converted to Christianity from a philosophical background and Trypho had just fled the disturbances in Palestine.[1]

When Justin suggests to Trypho to convert to Christianity, the dialogue becomes animated. Trypho criticizes Christians on a number of grounds, and Justin provides answers to each criticism.[1]

In the opening of the "dialogue", Justin relates his vain search among the Stoics, Peripatetics, and Pythagoreans for a satisfying knowledge of God; his finding in the ideas of Plato wings for his soul, by the aid of which he hoped to attain the contemplation of the God-head; and his meeting on the sea-shore with an aged man who told him that by no human endeavor but only by divine revelation could this blessedness be attained, that the prophets had conveyed this revelation to man, and that their words had been fulfilled. Of the truth of this he assured himself by his own investigation; and the daily life of the Christians and the courage of the martyrs convinced him that the charges against them were unfounded. So he sought to spread the knowledge of Christianity as the true philosophy.

In the Dialogue, Justin also wrote, "For I choose to follow not men or men's doctrines, but God and the doctrines [delivered] by Him. For if you have fallen in with some who are called Christians, but who do not admit this [truth], and venture to blaspheme the God of Abraham, and the God of Isaac, and the God of Jacob; who say there is no resurrection of the dead, and that their souls, when they die, are taken to heaven; do not imagine that they are Christians." [5] This passage is sometimes cited as evidence that the early church subscribed to the doctrine of soul sleep, though it is likely that Justin's emphasis is on saying that denial of the resurrection of the dead is what makes them non-Christian, especially considering that he claims that "even after death souls are in a state of sensation" in Chapter 18 of his First Apology.[6]

In his critical edition (with French translation), Philippe Bobichon demonstrates the particular nature of this text, equally influenced by Greek and Rabbinic thought.[7]

The authenticity of the Dialogue with Trypho and the two Apologies is universally accepted. They are preserved only in the Sacra parallela; but, besides that they were known by Tatian, Methodius, and Eusebius, their influence is traceable in Athenagoras, Theophilus of Antioch, the Pseudo-Melito, and especially Tertullian. Eusebius speaks of two Apologies, but he quotes them both as one, which indeed they are in substance. The identity of authorship is shown not only by the reference in chapter 120 of the Dialogue to the Apology, but by the unity of treatment. Zahn showed that the Dialogue was originally divided into two books, that there is a considerable lacuna in chapter 74, as well as at the beginning, and that it is probably based on an actual occurrence at Ephesus, the personality of the Rabbi Tarfon being employed, though in a Hellenized form.