SS-Hauptsturmführer Dieter Wisliceny (born 13 January 1911 in Regulowken now Możdżany, Giżycko County in East Prussia, now Poland; executed 4 May 1948 in Bratislava, now in the Republic of Slovakia), was a member of the Nazi SS, and a key executioner in the final phase of the Holocaust. 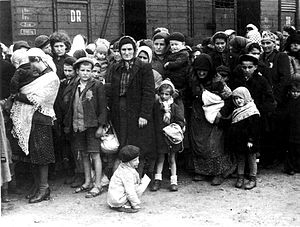 Hungarian Jewish women and children from Carpatho-Ruthenia after their arrival at the Auschwitz death camp (May/June 1944). Photo from the Auschwitz Album. 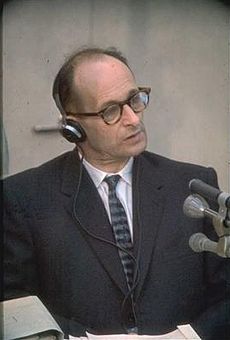 Adolf Eichmann on trial in 1961

Joining the Nazi Party in 1933 and enlisting in the SS in 1934, Wisliceny eventually rose to the rank of SS-Hauptsturmführer (Captain) in 1944. During implementation of the Final Solution, his task was the ghettoization and liquidation of several important Jewish communities in Nazi-occupied Europe, including those of Greece, Hungary and Slovakia. Wisliceny also re-introduced the yellow star in occupied countries, the yellow star being used to distinguish Jews from non-Jews. He was involved in the deportation of the Hungarian Jews in 1944.

Eichmann told me that the words "final solution" meant the biological extermination of the Jewish race... I was so much impressed with this document which gave Eichmann authority to kill millions of people that I said at the time: "May God forbid that our enemies should ever do anything similar to the German people". He replied: "Don't be sentimental – this is a Führer order". I realized at that time that the order was a death warrant for millions of people and that the power to execute this order was in Eichmann's hands subject to approval of Heydrich and later Kaltenbrunner. The program of extermination was already under way, and continued until late 1944. — SS-Hauptsturmführer Dieter Wisliceny, International Military Tribunal at Nurnberg, 3 January 1946. [1]

His younger brother was Obersturmbannführer Günther-Eberhardt Wisliceny (Lieutenant Colonel and recipient of Knights Cross of the Iron Cross). Gunther was also implicated in war crimes at Oradour-sur-Glane and other places.