Dieter Zetsche (born on May 5, 1953 in Istanbul, Turkey) is a German businessman and the Chairman of the Board of Directors of Daimler AG and Head of Mercedes-Benz Cars since 2006 as well as member of the company's Board since 1998.

He was born while his father, Herbert Zetsche, a civil engineer, was temporarily in Turkey for a dam construction project. The family returned to Germany in 1956. Dieter Zetsche attended school in Oberursel (near Frankfurt am Main) and studied electrical engineering from 1971 to 1976 at the University of Karlsruhe; he graduated as an engineer. He completed his doctorate in engineering in 1982 at the University of Paderborn.

He joined Daimler-Benz in 1976, working in the research department. In 1981, he became Assistant Development Manager at the Vehicles business unit. He became a member of the mlerChrysler's Board of Management in 1998 and served as the President/CEO of Chrysler Group from mid of 2000 to December 31, 2005, where he was credited with a turnaround of DCX's American operations. Since January 1, 2006, he succeeded Jürgen Schrempp as Chairman of DaimlerChrysler (now Daimler AG), being succeeded in the position of Chrysler Group CEO by Thomas W. LaSorda.

He was the main influence behind the demerger of Daimler and Chrysler in 2007, which ended in the newly formed Daimler AG.

Dieter Zetsche is credited with bringing significant core changes to the Mercedes-Benz company in an effort to turn around a decade long downward spiral in product quality and customer satisfaction. He was named in Time Magazine's 2006's list of 100 most influential people. 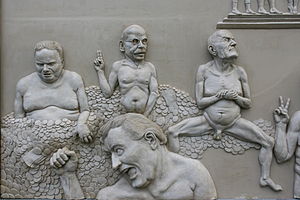 On June 30, 2006, Chrysler Group announced the Employee Pricing Plus program, which featured Dieter Zetsche as Dr. Z, the DaimlerChrysler spokesman for a series of United States and Canadian television commercials,[1][2] also animated in cartoon format on the company's Ask Dr. Z website, which began on July 1.

The ad campaign emphasized the consumer benefits of the best of American and German engineering and design built into every Chrysler, Jeep and Dodge vehicle. One included Zetsche riding in a Jeep Liberty crossing a pile of logs, another showed him at the trunk of a Dodge Caravan minivan heading a soccer ball, and the last showed him at the wheel of a Chrysler Pacifica when it undergoes a crash test where he emerges from the wreckage unscathed.[3] [4]

As a response of shrinking sales, the Employee Pricing Plus program was extended through the end of August, 3 new TV ads, which did not feature Dr. Z, were added to the August campaign.[5] After 3 months however DaimlerChrysler hurriedly withdrew the Dr. Z campaign due to a significant loss in market-share. However, some of the Dr. Z ads can still be seen in Canadian television. In later broadcasts, the tagline in Dr. Z TV ads was changed to 'See the best in German and North American design in your Dodge and Chrysler dealer.'

The campaign was criticized for having a wrong guy to do funny ads.[6] CNW Marketing Research poll showed most people thought Dr. Z was a fictional character, did not notice the employee discount offer in the ads and radio commercial listeners had difficulty understanding his German accent.[3][7]

Dieter Zetsche was awarded "Entrepreneur of the year" in 2008 from the German media.[8]

Zetsche was investigated for the involuntary manslaughter of a 27-year-old engineer who died in an accident caused by an intern on one of the firm’s test tracks. The newspaper Stuttgarter Zeitung reported earlier that the parents of the engineer felt the company should not have put the intern behind the wheel of a fast car on a test track. However, it was generally agreed that the public prosecutors were over-reaching their prosecutorial authority in holding Zetsche responsible, as he was not responsible in any way for regulating the limits of interns’ activities while at the company.[9]