Friedrich Wilhelm Eduard Kasimir Dietrich von Saucken (16 May 1892 – 27 September 1980) was a general in the German army during World War II.

Wounded in the Battle of Moscow, he commanded the 4th Panzer Division at Kursk, before becoming acting commander of the III. Panzer Corps in June 1944. While evacuating East Prussia in May 1945, he ordered his troops to surrender to the Red Army, and stayed with them, turning down the offer of escape by air. In captivity, he was beaten and crippled for life, before his release in 1955. Von Saucken was the last officer to be awarded the prestigious Knight's Cross of the Iron Cross with Oak Leaves, Swords and Diamonds.

Born in Fischhausen (today Primorsk in Russia), East Prussia, on 16 May 1892 Saucken joined the German Army as a Fahnenjunker (Cadet) in the Grenadier-Regiment König Friedrich William I (2. Ostpreußisches) Nr. 3 in 1910. He was promoted to Fähnrich (Ensign) in 1911 and was finally commissioned a 2nd Lieutenant on 19 June 1912. When World War I started in 1914 von Saucken quickly was assigned as Company Commander. In 1916 he was assigned as Battalion Adjutant and in 1917, with a promotion to 1st Lieutenant, assigned as Regimental Adjutant. When the war ended von Saucken was Brigade Adjutant, had survived 7 wounds (which got him the Wound Badge in Gold), earned both classes of the Iron Cross, the Knight's Cross of the Royal House Order of Hohenzollern and the Austrian Military Merit Cross.

After the First World War he served in the Volunteer Border Protection Unit East {aka "Grenzschutz Ost" of the Freikorps} and the Provisional National Army. When in 1921 the Reichswehr was officially constituted von Saucken was posted in the 1st (Prussian) Infantry Regiment, but in the same year changed to the 8th (Prussian) Cavalry Regiment. He transferred to the 2nd (Prussian) Cavalry Regiment in 1923, the same year he married. In 1925 he was promoted to Rittmeister, and from 1927 on he was on special assignment in the Soviet Union, where he also learned to speak Russian. In 1934 he was promoted to Major, and on 1 May he was assigned as Instructor of Tactics at the War School Hannover. Promoted to Lieutenant Colonel in 1936 he was assigned to command the 2nd Cavalry Regiment in 1937, and was promoted to Oberst (Colonel) on 1 June 1939.

Von Saucken led his regiment into the Invasion of Poland, which earned him the clasps to his two iron crosses. After fighting in the Battle of France he was assigned command of the 4. Schützen-Brigade (4th Motorized Infantry Brigade), the main infantry component of the 4th Panzer Division. With the brigade he fought in the Balkan Campaign and in the early phase of the Eastern Front in Operation Barbarossa. Appointed to command the division in December, he was promoted to Generalmajor on 1 January 1942, while they were right in the Battle of Moscow. Wounded just a day after his promotion, he had to recover several months. He was awarded the Knight's Cross of the Iron Cross on January 6, and was transferred to the School for Mobile Troops (Schule für Schnelle Truppen), where he was the commandant. On 1 April 1943 he was promoted to Generalleutnant, and two months later was return to his 4th Panzer Division.

Commanding his division till 20 May 1944, he fought at the Battle of Kursk, before becoming acting commander of the III. Panzer Corps in late June 1944. His oldest son, Leutnant Hans-Erich von Saucken (born on 29 May 1924), was killed in action on 30 May 1944 in Romania. During his second tenure with the 4th Panzer Division, he was mentioned in the Wehrmachtbericht (considered a high military honour and held in high esteem) for his service in the Gomel Sector. He received both the Oak Leaves and the Swords to his Knight's Cross when he saved the Ninth Army and the Second Army from destruction.

In June and July, Saucken formed the Kampfgruppe von Saucken (Battlegroup von Saucken) an ad hoc unit composed of the remnants of several units that had been smashed in the Soviet assault on Army Group Centre. Composed mainly of the 5th Panzer Division, 170th Infantry Division and the 505th Heavy Panzer Battalion, this was later designated the XXXIX Panzer Corps. It attempted to defend the occupied city of Minsk and temporarily maintained an escape route across the Berezina River for retreating German soldiers in the face of overwhelmingly superior Soviet forces that outnumbered them 10 to 1. For his conspicuous services during the campaign, von Saucken was again mentioned in the Wehrmachtsbericht, and on 1 August 1944 he was promoted to General der Panzertruppe (General of Armored Troops).

Saucken left the XXXIX Panzer Corps in late September 1944, when he took over command of the forming Panzerkorps Großdeutschland. Made up of elite units such as the Panzer-Grenadier-Division Großdeutschland and the Panzer-Grenadier-Division Brandenburg, and intended to receive enlarged and strengthened corps troops, this corps was expected to become a strong army reserve. However, the still incomplete corps was divided when half of it, including von Saucken, was ordered eastward to stop the Vistula–Oder Offensive. He led the corps until February 1945, when he was removed from his position and placed in the Führerreserve by Generaloberst Heinz Guderian, the Chief of Staff of the Army at the OKH, following an argument between them about the senselessness of continuing an already lost war.

Guderian nonetheless had a high opinion of von Sauken, whose abilities he thought outstanding. He records, in his book Panzer Leader, that in Eastern Germany in 1945 "Generals Nehring and von Sauken performed tasks of military virtuosity during those days that only the pen of a new Xenophon could adequately describe."[1]

A month later Saucken led the Second Army in its defence of Prussia and lent logistical support to the Evacuation of East Prussia. Saucken ordered his army, renamed to Army East Prussia in April, to surrender; one day after the unconditional surrender of all German forces on 8 May 1945. On 8 May von Saucken also received notice that he had been awarded the Knight's Cross with Oakleaves, Swords, and Diamonds on this day, making him the last of just 27 officers to receive this award (German: Ritterkreuz des Eisernen Kreuzes mit Eichenlaub, Schwertern und Brillanten), in recognition of extreme bravery or successful leadership on the battlefield.

Though an airplane stood by to evacuate him he refused to leave his troops. 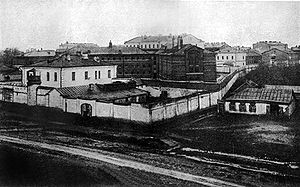 After surrendering on the Hel Peninsula, Saucken went into Soviet captivity. Initially he was imprisoned in the Lubyanka Building and the Oryol Prison before being transferred to the Siberian Tayshet Gulag in 1949. Kept in solitary confinement, ordered to hard labor and maltreated by Soviet interrogators after refusing to sign false confessions, Saucken was confined to use a wheelchair for the rest of his life. Released from Soviet captivity in 1955 he settled in Pullach near Munich and took up painting. He died there in 1980.

A cavalry officer who regularly wore both a sword and a monocle, Saucken personified the archetypal aristocratic Prussian conservative who despised the braune Bande ("brown mob") of Nazis. When he was ordered to take command of the Second Army on 12 March 1945, he came to Hitler's headquarters with his left hand resting casually on his cavalry sabre, his monocle in his eye, . . . [and then] saluted and gave a slight bow. This was three 'outrages' at once. He had not given the Nazi salute with raised arm and the words 'Heil Hitler', as had been regulation since 20 July 1944, he had not surrendered his weapon on entering....and had kept his monocle in his eye when saluting Hitler.

When Hitler told him that he must take his orders from Albert Forster, the Gauleiter (Nazi governor, or "District Leader") of Danzig, Saucken returned Hitler's gaze....and striking the marble slab of the map table with the flat of his hand, he said, 'I have no intention, Herr Hitler, of placing myself under the orders of a Gauleiter'. In doing this he had bluntly contradicted Hitler and not addressed him as Mein Führer.

To the surprise of everyone who was present, Hitler capitulated and replied, "All right, Saucken, keep the command yourself." Hitler dismissed the General without shaking his hand and Saucken left the room with only the merest hint of a bow.[2][3]