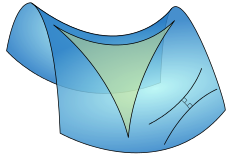 A triangle immersed in a saddle-shape plane (a hyperbolic paraboloid), as well as two diverging ultraparallel lines.

Differential geometry arose and developed[1] as a result of and in connection to the mathematical analysis of curves and surfaces. Mathematical analysis of curves and surfaces had been developed to answer some of the nagging and unanswered questions that appeared in Calculus, like the reasons for relationships between complex shapes and curves, series and analytic functions. These unanswered questions indicated greater, hidden relationships and symmetries in nature, which the standard methods of analysis could not address.

When curves, surfaces enclosed by curves, and points on curves were found to be quantitatively, and generally, related by mathematical forms the formal study of the nature of curves and surfaces became a field of study in its own right, with Monge's paper in 1795, and especially, with Gauss's publication of his article, titled 'Disquisitiones Generales Circa Superficies Curvas', in Commentationes Societatis Regiae Scientiarum Gottingesis Recentiores[2] in 1827.

A distance-preserving diffeomorphism between Riemannian manifolds is called an isometry. This notion can also be defined locally, i.e. for small neighborhoods of points. Any two regular curves are locally isometric. However, the Theorema Egregium of Carl Friedrich Gauss showed that already for surfaces, the existence of a local isometry imposes strong compatibility conditions on their metrics: the Gaussian curvatures at the corresponding points must be the same. In higher dimensions, the Riemann curvature tensor is an important pointwise invariant associated to a Riemannian manifold that measures how close it is to being flat. An important class of Riemannian manifolds is the Riemannian symmetric spaces, whose curvature is not necessarily constant. These are the closest analogues to the "ordinary" plane and space considered in Euclidean and non-Euclidean geometry.

Pseudo-Riemannian geometry generalizes Riemannian geometry to the case in which the metric tensor need not be positive-definite. A special case of this is a Lorentzian manifold, which is the mathematical basis of Einstein's general relativity theory of gravity.

Finsler geometry has the Finsler manifold as the main object of study. This is a differential manifold with a Finsler metric, i.e. a Banach norm defined on each tangent space. A Finsler metric is a much more general structure than a Riemannian metric. A Finsler structure on a manifold M is a function F : TM → [0,∞) such that:

By contrast with Riemannian geometry, where the curvature provides a local invariant of Riemannian manifolds, Darboux's theorem states that all symplectic manifolds are locally isomorphic. The only invariants of a symplectic manifold are global in nature and topological aspects play a prominent role in symplectic geometry. The first result in symplectic topology is probably the Poincaré-Birkhoff theorem, conjectured by Henri Poincaré and then proved by G.D. Birkhoff in 1912. It claims that if an area preserving map of an annulus twists each boundary component in opposite directions, then the map has at least two fixed points.[3]

Contact geometry deals with certain manifolds of odd dimension. It is close to symplectic geometry and like the latter, it originated in questions of classical mechanics. A contact structure on a (2n + 1) - dimensional manifold M is given by a smooth hyperplane field H in the tangent bundle that is as far as possible from being associated with the level sets of a differentiable function on M (the technical term is "completely nonintegrable tangent hyperplane distribution"). Near each point p, a hyperplane distribution is determined by a nowhere vanishing 1-form

, which is unique up to multiplication by a nowhere vanishing function:

A local 1-form on M is a contact form if the restriction of its exterior derivative to H is a non-degenerate two-form and thus induces a symplectic structure on Hp at each point. If the distribution H can be defined by a global one-form

is a volume form on M, i.e. does not vanish anywhere. A contact analogue of the Darboux theorem holds: all contact structures on an odd-dimensional manifold are locally isomorphic and can be brought to a certain local normal form by a suitable choice of the coordinate system.

, endowed with a tensor of type (1, 1), i.e. a vector bundle endomorphism (called an almost complex structure)

It follows from this definition that an almost complex manifold is even-dimensional.

An almost complex manifold is called complex if

, called the Nijenhuis tensor (or sometimes the torsion). An almost complex manifold is complex if and only if it admits a holomorphic coordinate atlas. An almost Hermitian structure is given by an almost complex structure J, along with a Riemannian metric g, satisfying the compatibility condition

The following two conditions are equivalent:

is the Levi-Civita connection of

CR geometry is the study of the intrinsic geometry of boundaries of domains in complex manifolds.

Differential topology is the study of (global) geometric invariants without a metric or symplectic form. It starts from the natural operations such as Lie derivative of natural vector bundles and de Rham differential of forms. Beside Lie algebroids, also Courant algebroids start playing a more important role.

A Lie group is a group in the category of smooth manifolds. Beside the algebraic properties this enjoys also differential geometric properties. The most obvious construction is that of a Lie algebra which is the tangent space at the unit endowed with the Lie bracket between left-invariant vector fields. Beside the structure theory there is also the wide field of representation theory.

The apparatus of vector bundles, principal bundles, and connections on bundles plays an extraordinarily important role in modern differential geometry. A smooth manifold always carries a natural vector bundle, the tangent bundle. Loosely speaking, this structure by itself is sufficient only for developing analysis on the manifold, while doing geometry requires, in addition, some way to relate the tangent spaces at different points, i.e. a notion of parallel transport. An important example is provided by affine connections. For a surface in R3, tangent planes at different points can be identified using a natural path-wise parallelism induced by the ambient Euclidean space, which has a well-known standard definition of metric and parallelism. In Riemannian geometry, the Levi-Civita connection serves a similar purpose. (The Levi-Civita connection defines path-wise parallelism in terms of a given arbitrary Riemannian metric on a manifold.) More generally, differential geometers consider spaces with a vector bundle and an arbitrary affine connection which is not defined in terms of a metric. In physics, the manifold may be the space-time continuum and the bundles and connections are related to various physical fields.

From the beginning and through the middle of the 18th century, differential geometry was studied from the extrinsic point of view: curves and surfaces were considered as lying in a Euclidean space of higher dimension (for example a surface in an ambient space of three dimensions). The simplest results are those in the differential geometry of curves and differential geometry of surfaces. Starting with the work of Riemann, the intrinsic point of view was developed, in which one cannot speak of moving "outside" the geometric object because it is considered to be given in a free-standing way. The fundamental result here is Gauss's theorema egregium, to the effect that Gaussian curvature is an intrinsic invariant.

The intrinsic point of view is more flexible. For example, it is useful in relativity where space-time cannot naturally be taken as extrinsic (what would be "outside" of it?). However, there is a price to pay in technical complexity: the intrinsic definitions of curvature and connections become much less visually intuitive.

These two points of view can be reconciled, i.e. the extrinsic geometry can be considered as a structure additional to the intrinsic one. (See the Nash embedding theorem.) In the formalism of geometric calculus both extrinsic and intrinsic geometry of a manifold can be characterized by a single bivector-valued one-form called the shape operator.[4]

Below are some examples of how differential geometry is applied to other fields of science and mathematics.