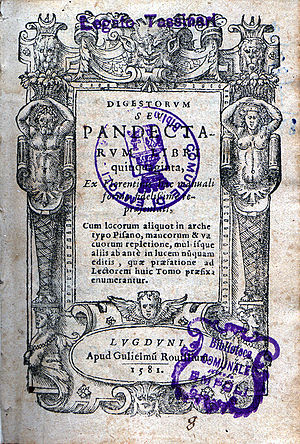 The Digest, also known as the Pandects (Latin: Digesta seu Pandectae, adapted from Ancient Greek: πανδέκτης pandéktēs, "all-containing"), is a name given to a compendium or digest of juristic writings on Roman law compiled by order of the Byzantine emperor Justinian I in 530–533 AD. It is divided into 50 books.

The Digest was part of a reduction and codification of all Roman laws up to that time, which later came to be known as the Corpus Juris Civilis (lit. "Body of Civil Law"[1]). The other two parts were a collection of statutes, the Codex (Code), which survives in a second edition, and an introductory textbook, the Institutes; all three parts were given force of law. The set was intended to be complete, but Justinian passed further legislation, which was later collected separately as the Novellae Constitutiones (New Laws or, conventionally, the "Novels").

The original Codex Justinianus was promulgated in April of 529 by the C. "Summa". This made it the only source of imperial law, and repealed all earlier codifications.[2] However, it permitted reference to ancient jurists whose writings had been regarded as authoritative.[3] Under Theodosus II's Law of Citations, the writings of Papinian, Paulus, Ulpian, Modestinus, and Gaius were made the primary juristic authorities who could be cited in court. Others cited by them also could be referred to, but their views had to be "informed by a comparison of manuscripts".[4]

The principal surviving manuscript is the Littera Florentina of the late sixth or early seventh century. In the Middle Ages, the Digest was divided into three parts, and most of the manuscripts contain only one of these parts.[5] The entire Digest was first translated into English in 1985 by the Scottish legal scholar Alan Watson.[6]

The Digest was discovered in Amalfi in 1135, prompting a revival of learning of Roman law throughout Europe. Other sources claim it was discovered in 1070 and formed a major impetus for the founding of the first university in Europe, the University of Bologna (1088).[citation needed]

The codified authorities often conflicted. Therefore, Justinian ordered these conflicts to be settled and fifty of these were published as the "quinquaginta decisiones" (fifty decisions). Soon after, he further decreed that the works of these ancient writers, which totalled over 1,500 books, be condensed into fifty books. These were to be entitled, in Latin, Digesta (Ordered abstracts) or, in Greek, Πανδέκται Pandectae ("Encyclopedia").[7] In response to this order of December 15, 530 ("Deo auctore"), Tribonian created a commission of sixteen members to do the work—one government official, four professors, and eleven advocates.[8]

The commission was given the power to condense and alter the texts in order to simplify, clarify, and eliminate conflicts among them.[8] The Digest's organization is complex: each of the fifty books is divided into several titles, each containing several extracts, and many of the extracts have several parts or paragraphs. Research in the modern era has created a highly probable picture of how the commission carried out its task.[9]

Approximately two-fifths of the Digest consists of the writings of Ulpian, while some one-sixth belongs to Paulus.[7] The work was declared to be the sole source of non-statute law: commentaries on the compilation were forbidden, or even the citing of the original works of the jurists for the explaining of ambiguities in the text.[10]

A translation of the Digest can be found in four volumes completed in 1985 by Alan Watson, based on the Latin text of published by Theodor Mommsen in 1878.[11]