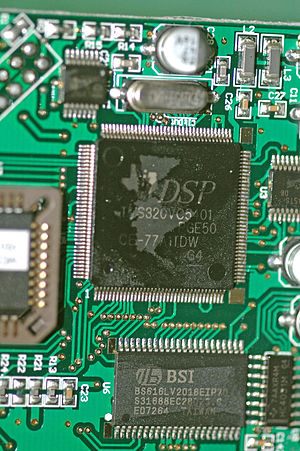 The goal of DSPs is usually to measure, filter and/or compress continuous real-world analog signals. Most general-purpose microprocessors can also execute digital signal processing algorithms successfully, but dedicated DSPs usually have better power efficiency thus they are more suitable in portable devices such as mobile phones because of power consumption constraints.[3] DSPs often use special memory architectures that are able to fetch multiple data and/or instructions at the same time.

Digital signal processing algorithms typically require a large number of mathematical operations to be performed quickly and repeatedly on a series of data samples. Signals (perhaps from audio or video sensors) are constantly converted from analog to digital, manipulated digitally, and then converted back to analog form. Many DSP applications have constraints on latency; that is, for the system to work, the DSP operation must be completed within some fixed time, and deferred (or batch) processing is not viable.

Most general-purpose microprocessors and operating systems can execute DSP algorithms successfully, but are not suitable for use in portable devices such as mobile phones and PDAs because of power efficiency constraints.[3] A specialized digital signal processor, however, will tend to provide a lower-cost solution, with better performance, lower latency, and no requirements for specialized cooling or large batteries.[citation needed]

By the standards of general-purpose processors, DSP instruction sets are often highly irregular. One implication for software architecture is that hand-optimized assembly-code routines are commonly packaged into libraries for re-use, instead of relying on advanced compiler technologies to handle essential algorithms.[clarification needed]

DSPs are usually optimized for streaming data and use special memory architectures that are able to fetch multiple data and/or instructions at the same time, such as the Harvard architecture or Modified von Neumann architecture, which use separate program and data memories (sometimes even concurrent access on multiple data buses).

DSPs can sometimes rely on supporting code to know about cache hierarchies and the associated delays. This is a tradeoff that allows for better performance[clarification needed]. In addition, extensive use of DMA is employed.

Prior to the advent of stand-alone DSP chips discussed below, most DSP applications were implemented using bit-slice processors. The AMD 2901 bit-slice chip with its family of components was a very popular choice. There were reference designs from AMD, but very often the specifics of a particular design were application specific. These bit slice architectures would sometimes include a peripheral multiplier chip. Examples of these multipliers were a series from TRW including the TDC1008 and TDC1010, some of which included an accumulator, providing the requisite multiply–accumulate (MAC) function.

In 1976, Richard Wiggins proposed the Speak & Spell concept to Paul Breedlove, Larry Brantingham, and Gene Frantz at Texas Instrument's Dallas research facility. Two years later in 1978 they produced the first Speak & Spell, with the technological centerpiece being the TMS5100,[4] the industry's first digital signal processor. It also set other milestones, being the first chip to use Linear predictive coding to perform speech synthesis.[5]

In 1978, Intel released the 2920 as an "analog signal processor". It had an on-chip ADC/DAC with an internal signal processor, but it didn't have a hardware multiplier and was not successful in the market. In 1979, AMI released the S2811. It was designed as a microprocessor peripheral, and it had to be initialized by the host. The S2811 was likewise not successful in the market.

In 1980 the first stand-alone, complete DSPs – the NEC µPD7720 and AT&T DSP1 – were presented at the International Solid-State Circuits Conference '80. Both processors were inspired by the research in PSTN telecommunications.

Another DSP produced by Texas Instruments (TI), the TMS32010 presented in 1983, proved to be an even bigger success. It was based on the Harvard architecture, and so had separate instruction and data memory. It already had a special instruction set, with instructions like load-and-accumulate or multiply-and-accumulate. It could work on 16-bit numbers and needed 390 ns for a multiply–add operation. TI is now the market leader in general-purpose DSPs.

About five years later, the second generation of DSPs began to spread. They had 3 memories for storing two operands simultaneously and included hardware to accelerate tight loops, they also had an addressing unit capable of loop-addressing. Some of them operated on 24-bit variables and a typical model only required about 21 ns for a MAC. Members of this generation were for example the AT&T DSP16A or the Motorola 56000.

The main improvement in the third generation was the appearance of application-specific units and instructions in the data path, or sometimes as coprocessors. These units allowed direct hardware acceleration of very specific but complex mathematical problems, like the Fourier-transform or matrix operations. Some chips, like the Motorola MC68356, even included more than one processor core to work in parallel. Other DSPs from 1995 are the TI TMS320C541 or the TMS 320C80.

The fourth generation is best characterized by the changes in the instruction set and the instruction encoding/decoding. SIMD extensions were added, VLIW and the superscalar architecture appeared. As always, the clock-speeds have increased, a 3 ns MAC now became possible.

Modern signal processors yield greater performance; this is due in part to both technological and architectural advancements like lower design rules, fast-access two-level cache, (E)DMA circuitry and a wider bus system. Not all DSPs provide the same speed and many kinds of signal processors exist, each one of them being better suited for a specific task, ranging in price from about US$1.50 to US$300

Texas Instruments produces the C6000 series DSPs, which have clock speeds of 1.2 GHz and implement separate instruction and data caches. They also have an 8 MiB 2nd level cache and 64 EDMA channels. The top models are capable of as many as 8000 MIPS (instructions per second), use VLIW (very long instruction word), perform eight operations per clock-cycle and are compatible with a broad range of external peripherals and various buses (PCI/serial/etc). TMS320C6474 chips each have three such DSPs, and the newest generation C6000 chips support floating point as well as fixed point processing.

XMOS produces a multi-core multi-threaded line of processor well suited to DSP operations, They come in various speeds ranging from 400 to 1600 MIPS. The processors have a multi-threaded architecture that allows up to 8 real-time threads per core, meaning that a 4 core device would support up to 32 real time threads. Threads communicate between each other with buffered channels that are capable of up to 80 Mbit/s. The devices are easily programmable in C and aim at bridging the gap between conventional micro-controllers and FPGAs

CEVA, Inc. produces and licenses three distinct families of DSPs. Perhaps the best known and most widely deployed is the CEVA-TeakLite DSP family, a classic memory-based architecture, with 16-bit or 32-bit word-widths and single or dual MACs. The CEVA-X DSP family offers a combination of VLIW and SIMD architectures, with different members of the family offering dual or quad 16-bit MACs. The CEVA-XC DSP family targets Software-defined Radio (SDR) modem designs and leverages a unique combination of VLIW and Vector architectures with 32 16-bit MACs.

Analog Devices produce the SHARC-based DSP and range in performance from 66 MHz/198 MFLOPS (million floating-point operations per second) to 400 MHz/2400 MFLOPS. Some models support multiple multipliers and ALUs, SIMD instructions and audio processing-specific components and peripherals. The Blackfin family of embedded digital signal processors combine the features of a DSP with those of a general use processor. As a result, these processors can run simple operating systems like μCLinux, velOSity and Nucleus RTOS while operating on real-time data.

NXP Semiconductors produce DSPs based on TriMedia VLIW technology, optimized for audio and video processing. In some products the DSP core is hidden as a fixed-function block into a SoC, but NXP also provides a range of flexible single core media processors. The TriMedia media processors support both fixed-point arithmetic as well as floating-point arithmetic, and have specific instructions to deal with complex filters and entropy coding.

CSR produces the Quatro family of SoCs that contain one or more custom Imaging DSPs optimized for processing document image data for scanner and copier applications.

Most DSPs use fixed-point arithmetic, because in real world signal processing the additional range provided by floating point is not needed, and there is a large speed benefit and cost benefit due to reduced hardware complexity. Floating point DSPs may be invaluable in applications where a wide dynamic range is required. Product developers might also use floating point DSPs to reduce the cost and complexity of software development in exchange for more expensive hardware, since it is generally easier to implement algorithms in floating point.

In Communications a new breed of DSPs offering the fusion of both DSP functions and H/W acceleration function is making its way into the mainstream. Such Modem processors include ASOCS ModemX and CEVA's XC4000.