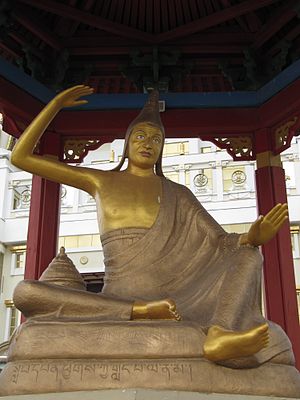 He was born into a[1] South Indian Brahmin family in Simhavakta near Kanchipuram and very little is known of his early years, except that he took as his spiritual preceptor Nagadatta of the Pudgalavada school before being expelled and becoming a student of Vasubandhu. This branch of Buddhist thought defended the view that there exists a kind of real personality independent of the elements or aggregates composing it.

Among Dignaga's works there is Hetucakra (The wheel of reason), considered his first work on formal logic, advancing a new form of deductive reasoning. It may be regarded as a bridge between the older doctrine of trairūpya and Dignaga's own later theory of vyapti which is a concept related to the Western notion of implication.

During Dignāga's time, the Nyaya school of Hinduism had begun to hold debates using their five-step approach to making and evaluating arguments with logic. Buddhist debaters such as Dignāga wanted to engage in these debates, and also have a way to logically evaluate arguments, but a premise such as "all dogs are mammals" proved problematic for his idealist Yogacara philosophy. Dignāga was a student of Vasubandhu, and therefore believed that "the dharmas are empty." In other words, there are not universal qualities such as "dog-ness" or "mammal-ness." Such universals would have to be unchanging, and since all things are subject to change and are lacking in essential essence according to his school of philosophy, Dignāga attempted to find a way to engage in argument within the Nyaya structure without positing through the arguments that there is an essential "dog-ness," or what have you.

To do this he employed what is referred to in formal logic in the West as contraposition, or in Sanskrit, Apoha, where one switches the terms and swaps them for their term complement. Therefore the example premise above, "all dogs are mammals" becomes "all non-mammals are non-dogs." These two statements are logically equivalent. Once this had been done, Dignāga could make arguments about non-mammals without explicitly positing that mammals have an essential nature. While this move gets off the ground towards his goal, reflection shows that making universal statements about non-mammals still implies that there are mammals who share an essential nature, and everything else, which lacks this "mammal-ness." Still, using this method Dignāga and other Buddhist logicians were able to further their logical discourse and felt more comfortable engaging in Nyaya structured debates.