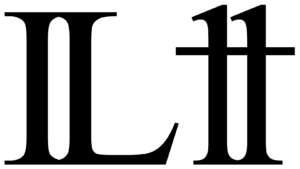 In Welsh, the digraph ⟨Ll⟩, ⟨ll⟩ fused for a time into a ligature.

A digraph or digram (from the Greek: δίς dís, "double" and γράφω gráphō, "to write") is a pair of characters used in the orthography of a language to write either a single phoneme (distinct sound), or a sequence of phonemes that does not correspond to the normal values of the two characters combined.

Digraphs are often used for phonemes that cannot be represented using a single character, like the English sh in ship and fish. In other cases they may be relics from an earlier period of the language when they had a different pronunciation, or represent a distinction which is made only in certain dialects, like English wh. They may also be used for purely etymological reasons, like rh in English. Digraphs are used in some Romanization schemes, like the zh often used to represent the Russian letter ж. As an alternative to digraphs, orthographies and Romanization schemes sometimes use letters with diacritics, like the Czech š, which has the same function as the English digraph sh.

In some languages' orthographies, digraphs (and occasionally trigraphs) are considered individual letters, meaning that they have their own place in the alphabet, and cannot be separated into their constituent graphemes, e.g. when sorting, abbreviating or hyphenating. Examples are found in Hungarian (cs, dz, dzs, gy, ly, ny, sz, ty, zs), Czech and Slovak (ch), and Gaj's Latin Alphabet (lj, nj, dž). In Dutch, when the digraph ij is capitalized, both letters are capitalized (IJ).

Digraphs may develop into ligatures, but these are distinct concepts – a ligature involves a graphical combination of two characters, as when a and e are fused into æ.

Digraphs may consist of two different characters (heterogeneous digraphs) or two instances of the same character (homogeneous digraphs). In the latter case, they are generally called double (or doubled) letters.

Doubled consonant letters can also be used to indicate length: the consonant sound is geminated. In Italian, for example, consonants written double are pronounced longer than single ones. It was the original meaning of doubled consonants in Old English, but during the Middle English and Early Modern English period, it developed into a spelling convention whereby a doubled consonant serves to indicated that a preceding vowel is to be pronounced short. In modern English, for example, the ⟨pp⟩ of tapping differentiates the first vowel sound from that of taping. Consonants are rarely geminated when they come from different morphemes and ⟨nn⟩ in unnatural (un+natural).

In many European writing systems, including the English one, the doubling of the letter ⟨c⟩ or ⟨k⟩ is represented as the heterogeneous digraph ⟨ck⟩ instead of ⟨cc⟩ or ⟨kk⟩ respectively. In native German words, the doubling of ⟨z⟩, which corresponds to /ts/, is replaced by the digraph ⟨tz⟩.

The pair of letters making up a phoneme are not always adjacent. This is the case with English silent e. For example, the sequence a...e has the sound /eɪ/ in English cake. This is the result of three historical sound changes: cake was originally /kakə/, the open syllable /ka/ came to be pronounced with a long vowel, and later the final schwa dropped off, leaving /kaːk/. Later still, the vowel /aː/ became /eɪ/.

However, alphabets may also be designed with discontinuous digraphs. In the Tatar Cyrillic alphabet, for example, the letter ю is used to write both /ju/ and /jy/. Usually the difference is evident from the rest of the word, but when it is not, the sequence ю...ь is used for /jy/, as in юнь /jyn/ 'cheap'.

The Indic alphabets are distinctive for their discontinuous vowels, such as Thai เ...อ /ɤː/ in เกอ /kɤː/. Technically, however, these are diacritics, not full letters; whether they are digraphs is thus a matter of definition.

Some letter pairs should not be interpreted as digraphs, but appear due to compounding, like in hogshead and cooperate. This is often not marked in any way, so must be memorized as an exception. Some authors, however, indicate it either by breaking up the digraph with a hyphen, as in hogs-head, co-operate, or with a trema mark, as in coöperate, though usage of this diaeresis has declined in English within the last century. When it occurs in names such as Clapham, Townshend and Hartshorne, it is never marked in any way. Positional alternative glyphs may help to disambiguate in certain cases, e.g. when round ⟨s⟩ is used as a final variant of long ⟨ſ⟩ the English digraph resembling /ʃ/ would always be ⟨ſh⟩.

In romanization of Japanese, the constituent sounds (morae) are usually indicated by digraphs, but some are indicated by a single letter, and some with a trigraph. The case of ambiguity is the syllabic ん, which is written as n (or sometimes m), except before vowels or y where it is followed by an apostrophe as n’. For example, the given name じゅんいちろう is romanized as Jun’ichirō, so that it is parsed as /jun.i.chi.rou/, rather than as /ju.ni.chi.rou/.

In some languages, certain digraphs and trigraphs are counted as distinct letters in themselves, and assigned to a specific place in the alphabet, separate from that of the sequence of characters which composes them, for purposes of orthography and collation. For example:

Most other languages, including English, French, German, Polish, etc., treat digraphs as combinations of separate letters for alphabetization purposes.

Other languages using the Latin alphabet

Note that in the Cyrillic orthography, these sounds are represented by single letters (љ, њ, џ).

In Czech and Slovak:

In Danish and Norwegian:

The digraphs listed above represent distinct phonemes. On the other hand, the digraphs ⟨mh⟩, ⟨nh⟩, and the trigraph ⟨ngh⟩, which stand for voiceless consonants, but only occur at the beginning of words as a result of the nasal mutation, are not included in the alphabet.

Daighi tongiong pingim, a transcription system used for Taiwanese Hokkien, includes or which represents /ə/ (mid central vowel) or /o/ (close-mid back rounded vowel), as well as other digraphs.

Modern Slavic languages written in the Cyrillic alphabet make little use of digraphs apart from ⟨дж⟩ for /dʐ/, ⟨дз⟩ for /dz/ (in Ukrainian, Belarusian, and Bulgarian), and ⟨жж⟩ and ⟨зж⟩ for the uncommon Russian phoneme /ʑː/. In Russian, the sequences ⟨дж⟩ and ⟨дз⟩ do occur (mainly in loanwords), but are pronounced as combinations of an implosive (sometimes treated as an affricate) and a fricative; implosives are treated as allophones of the plosive /d̪/, so these sequences are not considered to be digraphs. Cyrillic only has large numbers of digraphs when used to write non-Slavic languages, especially Caucasian languages.

Because vowels are not generally written, digraphs are rare in abjads like Arabic. For example, if sh were used for š, then the sequence sh could mean either ša or saha. However, digraphs are used for the aspirated and murmured consonants (those spelled with h-digraphs in Latin transcription) in languages of South Asia such as Urdu that are written in the Arabic script. This is accomplished with a special form of the letter h which is only used for aspiration digraphs, as seen with the following connecting (kh) and non-connecting (ḍh) consonants:

In the Armenian language, the digraph ու corresponds to /u/, (close back rounded vowel).

The Georgian alphabet uses a few diacritics when writing other languages. For example, in Svan, /ø/ is ჳე "we", and /y/ is ჳი "wi".

Modern Greek has the following digraphs:

These are called "diphthongs" in Greek; in classical times most of them did represent diphthongs, and the name has stuck.

Ancient Greek also had the "diphthongs" listed above although their pronunciation in ancient times is disputed. In addition Ancient Greek also used the letter γ combined with a velar stop to produce the following digraphs:

Tsakonian has a few additional digraphs: ρζ /ʒ/ (historically perhaps a fricative trill), κχ /kʰ/, τθ /tʰ/, πφ /pʰ/, σχ /ʃ/. In addition, palatal consonants are indicated with the vowel letter ι, but this is largely predictable. When /n/ and /l/ are not palatalized before ι, they are written νν and λλ.

In the Hebrew alphabet, תס and תש may sometimes be found for צ /ts/. Modern Hebrew also uses digraphs made with the ׳ symbol for non-native sounds: ג׳ /dʒ/, ז׳ /ʒ/, צ׳ /tʃ/; and other digraphs of letters when it is written without vowels: וו for a consonantal letter ו in the middle of a word, and יי for /aj/ or /aji/, etc., that is, a consonantal letter י in places where it might not have been expected. Yiddish has its own tradition of transcription, so uses different digraphs for some of the same sounds: דז /dz/, זש /ʒ/, טש /tʃ/, and דזש (literally dzš) for /dʒ/, וו /v/, also available as a single Unicode character װ, וי or as a single character in Unicode ױ /oj/, יי or ײ /ej/, and ײַ /aj/. The single-character digraphs are called "ligatures" in Unicode. י may also be used following a consonant to indicate palatalization in Slavic loanwords.

Most Indic scripts have compound vowel diacritics that cannot be predicted from their individual elements. This can be illustrated with Thai, where the diacritic เ, on its own pronounced /eː/, modifies the pronunciation of other vowels:

In addition, the combination รร is pronounced /a/ or /am/, there are some words where the combinations ทร and ศร stand for /s/ and the letter ห as prefix to a consonant changes its tonic class to high, modifying the tone of the syllable.

The latter forms trigraphs and tetragraphs.

Two kana may be combined into a CV syllable by subscripting the second; this convention cancels the vowel of the first. This is commonly done for CyV syllables called yōon, as in ひょ hyo ⟨hiyo⟩. These are not digraphs, as they retain the normal sequential reading of the two glyphs. However, some obsolete sequences no longer retain that reading, as in くゎ kwa, ぐゎ gwa, and むゎ mwa, now pronounced ka, ga, ma. In addition, non-sequenceable digraphs are used for foreign loans that do not follow normal Japanese assibilation patterns, such as ティ ti, トゥ tu, チェ tye / che, スェ swe, ウィ wi, ツォ tso, ズィ zi. (See Katakana and Transcription into Japanese for complete tables.)

Long vowels are written by adding the kana for that vowel, in effect doubling it. However, long ō may be written either oo or ou, as in とうきょう toukyou [toːkjoː] 'Tōkyō'. For dialects which do not distinguish ē and ei, the latter spelling is used for a long e, as in へいせい heisei [heːseː] 'Heisei'.

There are several conventions of Okinawan kana which involve subscript digraphs or ligatures. For instance, in the University of the Ryukyus system, ウ is /ʔu/, ヲ is /o/, but ヲゥ is /u/.

As was the case in Greek, Korean has vowels descended from diphthongs that are still written with two letters. These digraphs, ㅐ /ɛ/ and ㅔ /e/ (also ㅒ /jɛ/, ㅖ /je/), and in some dialects ㅚ /ø/ and ㅟ /y/, all end in historical ㅣ /i/.

Generally, a digraph is simply represented using two characters in Unicode.[1] However, for various reasons, Unicode sometimes provides a separate code point for a digraph, encoded as a single character.

The DZ and IJ digraphs and the Serbian/Croatian digraphs DŽ, LJ, and NJ have separate code points in Unicode.