From Infogalactic: the planetary knowledge core
(Redirected from Dihedral symmetry)
Jump to: navigation, search
See also: Dihedral symmetry in three dimensions
This article is about the dihedral group, sometimes referred to by symbol Dih. For other uses of Dih or DIH, see [[:DIH]]. 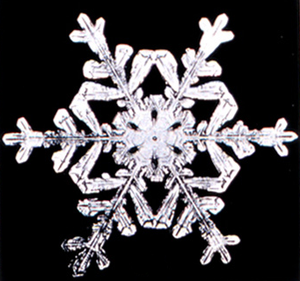 The symmetry group of a snowflake is Dih6, a dihedral symmetry, the same as for a regular hexagon.

In mathematics, a dihedral group is the group of symmetries of a regular polygon, which includes rotations and reflections.[1] Dihedral groups are among the simplest examples of finite groups, and they play an important role in group theory, geometry, and chemistry.

In this article, Dn (and sometimes Dihn) refers to the symmetries of a regular polygon with n sides. 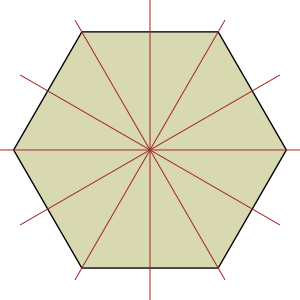 The six axes of reflection of a regular hexagon 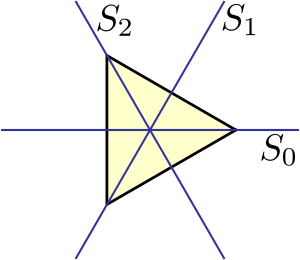 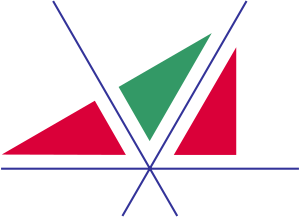 The composition of these two reflections is a rotation.

The following Cayley table shows the effect of composition in the group D3 (the symmetries of an equilateral triangle). r0 denotes the identity; r1 and r2 denote counterclockwise rotations by 120° and 240° respectively, and s0, s1 and s2 denote reflections across the three lines shown in the picture to the right.

In all cases, addition and subtraction of subscripts are to be performed using modular arithmetic with modulus n. 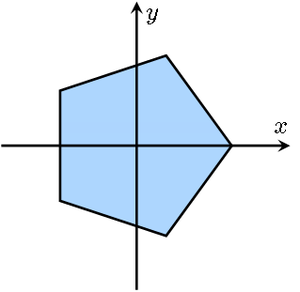 The symmetries of this pentagon are linear transformations of the plane as a vector space.

If we center the regular polygon at the origin, then elements of the dihedral group act as linear transformations of the plane. This lets us represent elements of Dn as matrices, with composition being matrix multiplication. This is an example of a (2-dimensional) group representation.

For example, the elements of the group D4 can be represented by the following eight matrices:

In general, the matrices for elements of Dn have the following form:

rk is a rotation matrix, expressing a counterclockwise rotation through an angle of 2πk/n. sk is a reflection across a line that makes an angle of πk/n with the x-axis. 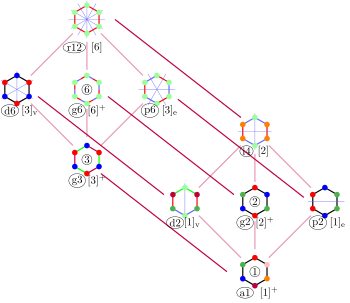 For n = 1, we have Dih1. This notation is rarely used except in the framework of the series, because it is isomorphic with Z2. For n = 2, we have Dih2, the Klein four-group. Both are exceptional within the series:

The cycle graphs of dihedral groups consist of an n-element cycle and n 2-element cycles. The dark vertex in the cycle graphs below of various dihedral groups represents the identity element, and the other vertices are the other elements of the group. A cycle consists of successive powers of either of the elements connected to the identity element.

An example of abstract group Dihn, and a common way to visualize it, is the group Dn of Euclidean plane isometries which keep the origin fixed. These groups form one of the two series of discrete point groups in two dimensions. Dn consists of n rotations of multiples of 360°/n about the origin, and reflections across n lines through the origin, making angles of multiples of 180°/n with each other. This is the symmetry group of a regular polygon with n sides (for n ≥ 3; this extends to the cases n = 1 and n = 2 where we have a plane with respectively a point offset from the "center" of the "1-gon" and a "2-gon" or line segment).

In matrix form, by setting

we can write the product rules for  Dn as

The dihedral group D2 is generated by the rotation r of 180 degrees, and the reflection s across the x-axis. The elements of D2 can then be represented as {e, r, s, rs}, where e is the identity or null transformation and rs is the reflection across the y-axis.

The four elements of D2 (x-axis is vertical here)

D2 is isomorphic to the Klein four-group.

Thus, beyond their obvious application to problems of symmetry in the plane, these groups are among the simplest examples of non-abelian groups, and as such arise frequently as easy counterexamples to theorems which are restricted to abelian groups.

So far, we have considered Dn to be a subgroup of O(2), i.e. the group of rotations (about the origin) and reflections (across axes through the origin) of the plane. However, notation Dn is also used for a subgroup of SO(3) which is also of abstract group type Dihn: the proper symmetry group of a regular polygon embedded in three-dimensional space (if n ≥ 3). Such a figure may be considered as a degenerate regular solid with its face counted twice. Therefore it is also called a dihedron (Greek: solid with two faces), which explains the name dihedral group (in analogy to tetrahedral, octahedral and icosahedral group, referring to the proper symmetry groups of a regular tetrahedron, octahedron, and icosahedron respectively).

Further equivalent definitions of Dihn are:

From the second presentation follows that Dihn belongs to the class of Coxeter groups.

is isomorphic to Dihn if

is the identity and

The properties of the dihedral groups Dihn with n ≥ 3 depend on whether n is even or odd. For example, the center of Dihn consists only of the identity if n is odd, but if n is even the center has two elements, namely the identity and the element rn / 2 (with Dn as a subgroup of O(2), this is inversion; since it is scalar multiplication by −1, it is clear that it commutes with any linear transformation).

For odd n, the abstract group Dih2n is isomorphic with the direct product of Dihn and Z2.

In the case of 2D isometries, this corresponds to adding inversion, giving rotations and mirrors in between the existing ones.

The dihedral group of order 8 (D4) is the smallest example of a group that is not a T-group. Any of its two Klein four-group subgroups (which are normal in D4) has as normal subgroup order-2 subgroups generated by a reflection (flip) in D4, but these subgroups are not normal in D4.

All the reflections are conjugate to each other in case n is odd, but they fall into two conjugacy classes if n is even. If we think of the isometries of a regular n-gon: for odd n there are rotations in the group between every pair of mirrors, while for even n only half of the mirrors can be reached from one by these rotations. Geometrically, in an odd polygon every axis of symmetry passes through a vertex and a side, while in an even polygon there are two sets of axes, each corresponding to a conjugacy class: those that pass through two vertices and those that pass through two sides.

Algebraically, this is an instance of the conjugate Sylow theorem (for n odd): for n odd, each reflection, together with the identity, form a subgroup of order 2, which is a Sylow 2-subgroup (

is the maximum power of 2 dividing

), while for n even, these order 2 subgroups are not Sylow subgroups because 4 (a higher power of 2) divides the order of the group.

The automorphism group of Dihn is isomorphic to the holomorph of Z/nZ, i.e. to Hol(Z/nZ)

is Euler's totient function, the number of k in

, for k coprime to n); which automorphisms are inner and outer depends on the parity of n.

Compare the values 6 and 4 for Euler's totient function, the multiplicative group of integers modulo n for n = 9 and 10, respectively. This triples and doubles the number of automorphisms compared with the two automorphisms as isometries (keeping the order of the rotations the same or reversing the order).

The only values of n for which φ(n) = 2 are 3, 4, and 6, and consequently, there are only three dihedral groups that are isomorphic to their own automorphism groups, namely Dih3 (order 6), Dih4 (order 8), and Dih6 (order 12).[citation needed]

The inner automorphism group of Dihn is isomorphic to:[2]

There are several important generalizations of the dihedral groups: