Dillingen is a district in Swabia, Bavaria, Germany. It is bounded by (from the north and clockwise) the districts of Donau-Ries, Augsburg and Günzburg, and by the state of Baden-Württemberg (district of Heidenheim).

In ancient times the Danube river was a border between the Roman empire and the Germanic tribes north of the river. The Roman camp of Phoebiana (now Faimingen) was a bridgehead crossing the danube. There was an Apollo temple being one of the largest buildings north of the Alps in that time.

In medieval times the county of Dillingen was established. The counts of Dillingen ruled from the 10th to the 13th century, then (1258) the territory was turned over to the Prince Bishops of Augsburg, who gained several villages for their clerical state, hence subdividing the region into several patches, which were dissolved in the early 19th century. In 1804 Dillingen and its area became part of the state of Bavaria.

The district is crossed by the river Danube, which enters the district in the southwest and leaves to the east. All cities in the district except for Wertingen are located along the Danube. 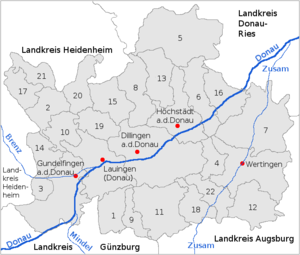 The district (Landkreis) of Dillingen – numbers in the map: see also the opposite list