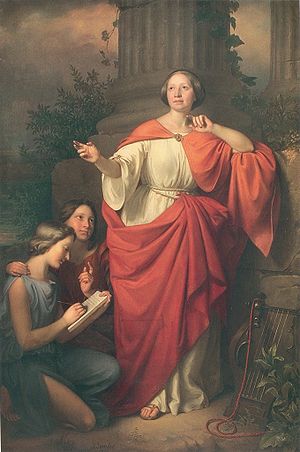 Jadwiga Łuszczewska, who used the pen name Diotima, posing as the ancient seer in a painting by Józef Simmler, 1855

Diotima of Mantinea (/ˌdaɪəˈtaɪmə/; Greek: Διοτίμα; Latin: Diotīma) is a female philosopher[1] and priestess who plays an important role in Plato's Symposium. Her ideas are the origin of the concept of Platonic love. Since the only source concerning her is Plato, it is uncertain whether she was a real historical personage or merely a fictional creation; however, nearly all of the characters named in Plato's dialogues have been found to correspond to real people living in ancient Athens.[2]

In Plato's Symposium the members of a party discuss the meaning of love. Socrates says that in his youth he was taught "the philosophy of love" by Diotima, who was a seer or priestess. Socrates also claims that Diotima successfully postponed the Plague of Athens.

In a dialogue that Socrates recounts at the symposium, Diotima gives Socrates a genealogy of Love (Eros), stating that he is the son of "resource and need." In her view, love is a means of ascent to contemplation of the Divine. For Diotima, the most correct use of love of other human beings is to direct one's mind to love of Divinity.[3] With genuine Platonic love, the beautiful or lovely other person inspires the mind and the soul and directs one's attention to spiritual things. One proceeds from recognition of another's beauty, to appreciation of Beauty as it exists apart from any individual, to consideration of Divinity, the source of Beauty, to love of Divinity.

The name Diotima means "honoured by Zeus". Her home of Mantinea was an ancient Greek city on the Peloponnese and the site of the largest battle of the Peloponnesian War.

Plato was thought by most 19th and early 20th century scholars to have based Diotima on Aspasia, the mistress of Pericles, so impressed was he by her intelligence and wit. The identity of Diotima is far from resolved, however. Aspasia appears under her own name in Plato's dialogue Menexenus, and some scholars have convincingly argued that Plato did not use false names: therefore, Diotima could be a historical figure.[4]

Influence and use of name

Her name has often been used as a moniker for philosophical or artistic projects, journals, essays, etc.: