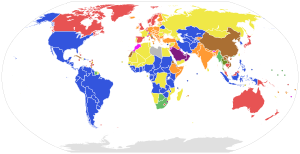 Switzerland and San Marino are the only contemporary countries which maintain a directorial system of government.

A Directorial Republic is a country ruled by a college of several people who jointly exercise the powers of a head of state or a head of government. This system of government is in contrast both with presidential republics and parliamentary republics.

In political history, the term Directory, in French Directoire, is applied to high collegial institutions of state composed of members styled director. The most important of these by far was the Directory of 1795–1799 in France.[1] The system was inspired by the Pennsylvania Constitution of 1776, which prominently featured a collegial 12-member Supreme Executive Council with a primus inter pares President. Variants of this form of government, based on the French model, were also established in the European regions conquered by France during the French Revolutionary Wars.

In the past, Uruguay, Yugoslavia (after Tito's death), Ukraine,[2] and other countries were ruled by directories. The government of the Soviet Union could in some ways be characterized as a directory, but it developed in a much different pattern discussed in the article on Communist states.

The sole country now using this form of government is Switzerland[3] (and to a lesser extent, San Marino), where directories rule all levels of administration, federal, cantonal and municipal. The Swiss Federal Council is elected by the Parliament for four years (its members cannot be dismissed), and is composed of seven members, among whom one is President and one is Vice-President, although these are relatively symbolic. There is no relationship of confidence between Parliament and the Federal Council. It is a shared system of government that reflects and represents the heterogeneity and multiethnicity of the Swiss people. Direct popular elections are used at the local level.

A Directorial System is a system of government in which the executive power is split a select number of individual who are, or de facto are, equals. Some[who?] have argued that diarchies such as Andorra are directorial as executive power is held between more than one person.[citation needed]