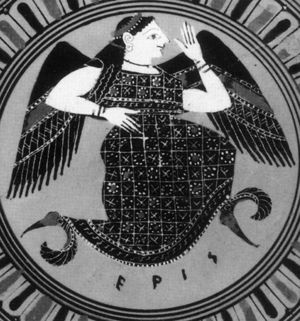 Eris, the Greek goddess of discord

Discordianism is a religion and subsequent philosophy based on the veneration or worship of Eris, a.k.a. Discordia, the Goddess of chaos, or archetypes or ideals associated with her. It was founded after the 1963 publication of its holy book, the Principia Discordia,[1] written by Greg Hill with Kerry Wendell Thornley, the two working under the pseudonyms Malaclypse the Younger and Omar Khayyam Ravenhurst.

The religion has been likened to Zen based on similarities with absurdist interpretations of the Rinzai school, as well as Taoist philosophy. Discordianism is centered on the idea that both order and disorder are illusions imposed on the universe by the human nervous system, and that neither of these illusions of apparent order and disorder is any more accurate or objectively true than the other.

There is some division as to whether it should be regarded as a parody religion, and if so to what degree.[2] It is difficult to estimate the number of Discordians because they are not required to hold Discordianism as their only belief system,[3] and because there is an encouragement to form schisms and cabals.[4][5]

The Golden Apple of Eris, sacred symbol for Discordianism

The foundational document of Discordianism is the Principia Discordia, fourth edition, written by Malaclypse the Younger, an alias of Greg Hill. This book contains many references to an earlier source, The Honest Book of Truth (HBT). The Principia includes a large portion (or possibly all) of a chapter of "The Book of Explanations" which recounts how the HBT was revealed to Lord Omar Khayyam Ravenhurst.[6] The tale of the discovery of the HBT contains many similarities to the tale of the discovery of the Book of Mormon, and Ravenhurst had been a Mormon. It also includes part of the next chapter, telling how the HBT was taken by a garbage collector, who refused to return it.[7]

The Principia Discordia often hints that Discordianism was founded as a dialectic antithesis to more popular religions based on order, although the rhetoric throughout the book describes chaos as a much more underlying impulse of the universe. This may have been done with the intention of merely "balancing out" the creative forces of order and disorder, but the focus is on the more disorderly aspects of the world — at times the forces of order are even vilified. There are other religions that revere the principles of harmony and order in the Universe, but few that show a respect for the disorder which we all face.[8][9]

Discordianism embraces the idea that “The Discordian Society has no definition”.[10]