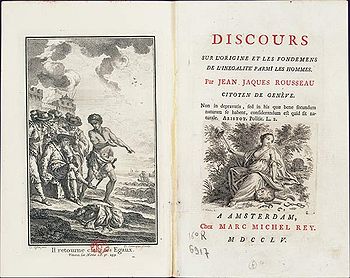 Frontispiece and title page of an edition of Rousseau's Discourse on Inequality (1754), published by Marc-Michel Rey in 1755 in Holland.

Rousseau first exposes in this work his conception of a human state of nature, presented as a philosophical fiction (like by Thomas Hobbes, unlike by John Locke), and of human perfectibility, an early idea of progress. He then explains the way, according to him, people may have established civil society, which leads him to present private property as the original source and basis of all inequality.

The text was written in 1754 in response to a prize competition of the Academy of Dijon answering the prompt: What is the origin of inequality among people, and is it authorized by natural law? Rousseau did not win with his treatise (as he had for the Discourse on the Arts and Sciences); a canon of Besançon by the name of François Xavier Talbert (l'abbé Talbert) did. Rousseau published the text in 1755.[1]

Rousseau's text is divided into four main parts: the dedication, the preface, an extended inquiry into the nature of the human being and another inquiry into the evolution of the human species within society. Also, there is a set of writings that expound upon important issues that were brought up in the beginning of the text.[2] Rousseau discusses two types of inequality, natural, or physical inequality, and ethical, or moral inequality. Natural inequality involves differences between one man's physical strength and that of another – it is a product of nature. Rousseau is not concerned with this type of inequality and wishes to investigate moral inequality. He argues moral inequality is endemic to a civil society and relates to, and causes, differences in power and wealth. This type of inequality is established by convention. Rousseau appears to take a cynical view of civil society, where man has strayed from his "natural state" of isolation and consequent freedom to satisfy his individual needs and desires. In the work, Rousseau concludes that civil society is a trick perpetrated by the powerful on the weak in order to maintain their power or wealth.

His discussion begins with an analysis of a natural man who has not yet acquired language or abstract thought. He then considers the origin of society:

The first man who, having fenced in a piece of land, said "This is mine," and found people naïve enough to believe him, that man was the true founder of civil society. From how many crimes, wars, and murders, from how many horrors and misfortunes might not any one have saved mankind, by pulling up the stakes, or filling up the ditch, and crying to his fellows: Beware of listening to this impostor; you are undone if you once forget that the fruits of the earth belong to us all, and the earth itself to nobody.

The two fundamental principles of Rousseau's natural man are his natural, non-destructive love of self (amour de soi meme), and pity/compassion for the suffering of others ("another principle which has escaped Hobbes").[3] Pity and self-love, acting together, contribute to preserving the human species through time.

Rousseau's natural man significantly differs from, and is a response to, that of Hobbes; Rousseau explicitly points this out at various points throughout his work. Rousseau discredits Hobbes for taking an overly cynical view of man. Unlike Hobbes's natural man, Rousseau's is not motivated by fear of death because he cannot conceive of that end, thus fear of death already suggests a movement out of the state of nature. Rousseau's natural man is more or less like any other animal, with "self-preservation being his chief and almost sole concern" and "the only goods he recognizes in the universe" being "food, a female, and sleep..."

This natural man, unlike Hobbes's, is not in constant state of fear and anxiety. Rousseau's natural man possesses a few qualities that allow him to distinguish himself from the animals over a long period of time. Of importance is man's ability to choose, which Rousseau refers to as "free-agency" or free will (fr. libre-arbitre). Rousseau's free will is guided by natural rules of human life, as a human is "a being that always acts in accordance with certain and invariable principles".[4]

The quality of compassion also motivates man to interact. Finally, man possesses the quality of "perfectibility," which allows him to improve his own physical condition/environmental situation and develop ever more sophisticated survival tactics. The increasing regularity and convention of man's contact with other men transfigures his basic capacity for reason and reflection, his natural or naive self-love into a corrupting dependency on the perceptions and favor of others. Natural, non-destructive love of self advances gradually yet qualitatively into a state of amour propre, a love of self now driven by pride and jealousy rather than merely elemental self-preservation. This accession to amour propre has four consequences: (1) competition, (2) self-comparison with others, (3) hatred, and (4) urge for power. These all lead to Rousseau's cynical civil society. But amour de soi meme also suggests a significant step out of the state of nature.[citation needed]

Rousseau's man is a "savage" man. He is a loner and self-sufficient. Any battle or skirmish was only to protect himself. The natural man was in prime condition, fast, and strong, capable of caring for himself. He killed only for his own self-preservation. When the natural man established property as his own, this was the "beginning of evil" according to Rousseau, though he acknowledges the sanctity of the institution of property and that government should be created to protect it. The natural man should have "pulled up the stakes" to prevent this evil from spreading. This property established divisions in the natural world. The first was the master-slave relationship. Property also led to the creation of families. The natural man was no longer alone. The subsequent divisions almost all stem from this division of land.[citation needed]

The work is dedicated to the state of Geneva, Rousseau's birthplace. On the face of the dedication, he praises Geneva as a good, if not perfect, republic. The qualities he picks out for praise include the stability of its laws and institutions, the community spirit of its inhabitants, and its good relations with neighboring states, neither threatening them nor threatened by them, and the well-behaved women of Geneva. However, this is not how Geneva truly was. This is the type of regime Rousseau wished for. The epistle dedicatory is a highly ironic and idealized version of the Geneva Rousseau really wanted. Also, his description is in great contrast with Paris, where he had spent many years previous to writing this discourse, and which he had left bitterly. Thus, his description of Geneva is in part a statement against Paris.[citation needed]