Disequilibrium economics refers to a tradition of research centered on the role of disequilibrium in economics. This trend in economics is also known as non-Walrasian theory, equilibrium with rationing, the non-market clearing approach, and non-tâtonnement theory.[1] Early work in the area was done by Don Patinkin, Robert W. Clower, and Axel Leijonhufvud. Their work was formalized into general disequilibrium models, which were very influential in the 1970s. American economists had mostly abandoned these models by the late 1970s, but French economists continued work in the tradition and developed fixprice models.

Robert Barro and Herschel Grossman formulated general disequilibrium models,[5] in which individual markets were locked into prices before there was a general equilibrium. These markets produced "false prices" resulting in disequilibrium.[6] Soon after the work of Barro and Grossman, disequilibrium models fell out of favor in the United States[7][8][9] and Barro abandoned Keynesianism and adopted new classical, market-clearing hypotheses.[10] However, leading American economists continued work with disequilibrium models, for example Franklin M. Fisher at MIT, Richard E. Quandt at Princeton University, and John Roberts at Stanford University.[11][12][13][14] 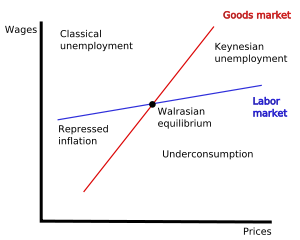 Malinvaud used disequilibrium analysis to develop a theory of unemployment.[23] He argued that disequilibrium in the labor and goods markets could lead to rationing of goods and labor, leading to unemployment.[24] Malinvaud adopted a fixprice framework and argued that pricing would be rigid in modern, industrial prices compared to the relatively flexible pricing systems of raw goods that dominate agricultural economies.[24] In Malinvaud's framework, prices are fixed and only quantities adjust.[25] Malinvaud considers an equilibrium state in classical and Keynesian unemployment as most likely. He pays less attention to the case of repressed inflation and considers underconsumption/unemployment a theoretical curiosity.[26] Work in the neoclassical tradition is confined as a special case of Malinvaud's typology, the Walrasian equilibrium. In Malinvaud's theory, reaching the Walrasian equilibrium case is almost impossible to achieve given the nature of industrial pricing.[27] Malinvaud's work provided different policy prescriptions depending on the state of the economy.[26] Given Keynesian unemployment, fiscal policy could shift both the labor and goods curves upwards leading to higher wages and prices. With this shift, the Walrasian equilibrium would be closer to the actual economic equilibrium. On the other hand, fiscal policy with an economy in the classical unemployment would only make matters worse. A policy leading to higher prices and lower wages would be recommended instead.[28]

"Disequilibrium macroeconometrics" was developed by Drèze's, Henri Sneessens (1981) and Jean-Paul Lambert (1988).[29] A joint paper by Drèze and Sneessens inspired Drèze and Richard Layard to lead the European Unemployment Program, which estimated a common disequilibrium model in ten countries.[30] The results of that successful effort were to inspire policy recommendations in Europe for several years.[20][21]

In Belgium, Jacques Drèze defined equilibria with price rigidities and quantity constraints and studied their properties, extending the Arrow–Debreu model of general equilibrium theory in mathematical economics. Introduced in his 1975 paper, a "Drèze equilibrium" occurs when supply (demand) is constrained only when prices are downward (upward) rigid, whereas a preselected commodity (e.g. money) is never rationed. Existence is proved for arbitrary bounds on prices. A joint paper with Pierre Dehez established the existence of Drèze equilibria with no rationing of the demand side. Stanford's John Roberts studied supply-constrained equilibria at competitive prices;[31] similar results were obtained by Jean-Jacques Herings at Tilburg (1987, 1996).[32] Roberts and Hering proved the existence of a continuum of Drèze equilibria. Then Drèze (113) proved existence of equilibria with arbitrarily severe rationing of supply. Next, in a joint paper with Herings and others (132), the generic existence of a continuum of Pareto-ranked supply-constrained equilibria was established for a standard economy with some fixed prices. The multiplicity of equilibria thus formalises a trade-off between inflation and unemployment, comparable to a Phillips curve. Drèze viewed his approach to macroeconomics as examining the macroeconomic consequences of Arrow–Debreu general equilibrium theory with rationing, an approach complementing the often-announced program of providing microfoundations for macroeconomics.[18]