From Infogalactic: the planetary knowledge core
Jump to: navigation, search
For other uses, see Dixie (disambiguation). 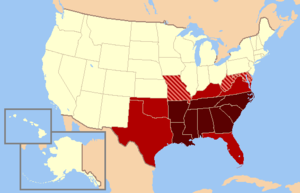 The states in dark red are almost always included in modern-day definitions of the Southern United States, while those in medium red are sometimes included. Those cross-shaded are occasionally included due to their historic connections to the South.[1][2][3]

Dixie is a historical nickname for the Southern United States.

According to the Oxford English Dictionary, the origins of this nickname remain obscure. According to A Dictionary of Americanisms on Historical Principles (1951), by Mitford M. Mathews, three theories most commonly attempt to explain the term:

"Dixie" as a region 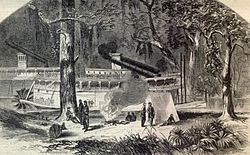 Bayou Navigation in Dixie, engraving of a Louisiana Steamboat, 1863.

As a definite geographic location within the United States, "Dixie" is usually defined as the eleven Southern states that seceded in late 1860 and early 1861 to form the new confederation named the Confederate States of America. They are (in order of secession): South Carolina, Mississippi, Florida, Alabama, Georgia, Louisiana, Texas, Virginia, Arkansas, North Carolina, and Tennessee.

However, the location and boundaries of "Dixie" have become, over time, more limited, vernacular and mercurial. Today, it is most often associated with those parts of the Southern United States where traditions and legacies of the Confederate era and the antebellum South live most strongly.

Many businesses in the South contain "Dixie" in their name as an identifier, such as supermarket chain "Winn-Dixie".

"I Wish I Was in Dixie's Land" sheet music 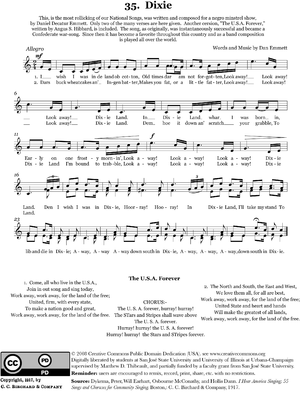 "I Wish I Was in Dixie" is a popular song about the South. It was allegedly written by composer Daniel Emmett, a Northerner from Mount Vernon, Ohio, and published in 1859. Emmett's claims of the origin of the song were many and varied. According to one such version, Emmett was taught the song by the Snowden family of African American musicians, then freemen of color, with the lyrics coming from a letter written longingly of life in the south by Evelyn Snowden to her father. Emmett's blackface minstrel-show troupe debuted the song that same year in New York City when they needed a song to lengthen their presentation and it became an immediate hit. As with other minstrel show numbers, the song was performed in blackface and in exaggerated Black English vernacular. The song proved extremely popular and became widely known simply as "Dixie". The song has also been published as "Dixie's Land".

The song became the unofficial anthem of the Confederate States of America during the American Civil War. The tune's minstrel-show origins have created a strong association of "Dixie" with the Old South, despite the fact that it was written in the North. As a result, some today perceive the song as offensive and racist while others see it as an honorable part of Southern heritage. Abraham Lincoln, upon hearing of the Confederate surrender at Appomattox, asked the military band to play Dixie.[6][7]