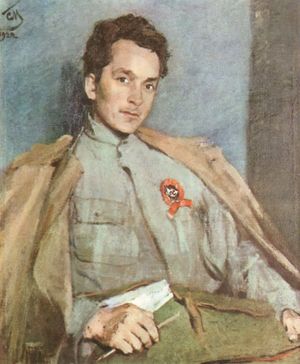 Dmitriy Andreyevich Furmanov (Russian: Дми́трий Андре́евич Фу́рманов; 7 November 1891 [O.S. 26 October] – March 15, 1926) was a Russian writer. During the Russian Civil War he joined the Red Army and served as a Bolshevik commissar. He is well known for his novel Chapayev about Vasily Chapayev, a Red Army officer and a hero of the Civil War. The novel is available in English translation.

In 1941, the town of Sereda, where he was born, was renamed Furmanov after him. A street in Almaty is named after him.

Furmanov is buried in Novodevichy Cemetery.