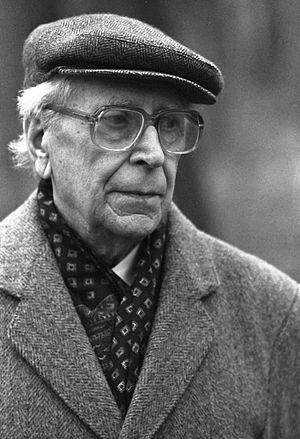 Dmitry Sergeyevich Likhachov (Russian: Дми́трий Серге́евич Лихачёв, also Dmitri Likhachev or Likhachyov; 28 November [O.S. 15 November] 1906 in St. Petersburg – 30 September 1999 in St. Petersburg) was an outstanding Soviet Russian scholar who was considered the world's foremost expert in Old Russian language and literature. He has been revered as "the last of old St Petersburgers", "a guardian of national culture", and "Russia's conscience".

Dmitry Likhachyov's personality is symbolic of Russian culture of the 20th century. He was an intellectual who survived a Soviet labor camp, one of Russia's most outstanding scientists, and a notable public figure who managed to preserve his moral values and strength of mind throughout his life.

Dmitry Likhachyov was born in Saint Petersburg. From his early childhood he had a passion for literature, even though his parents did not approve of this interest.

In 1923, at only 16 years old, Likhachyov entered the Department of Linguistics and Literature of Leningrad State University. He attended the Roman-Germanic and Slavic-Russian sections at the same time, undertaking two diplomas. At the university the young Likhachyov met many outstanding scientists and developed his own way of thinking. In 1928, at the end of his studies, Likhachyov was arrested and accused of being a member of the students' club the "Cosmic Academy of Science", which was simply a playful name for a group of like-minded youths. Shortly before his arrest, Dmitry Likhachyov had presented a short report, in which, either jokingly or seriously, he claimed that the new spelling rules of 1918 were "demonic" and worse than the old ones. This document provided proof of his "counter-revolutionary" ideas. After nine months in jail, the young scientist was unlawfully exiled without trial and spent five years in the USSR's largest labor camp, situated on the Solovetsky Islands in the White Sea.

At the camp, hard work, poor living conditions and illness dramatically damaged Likhachyov’s health, but he survived. On the Solovetsky Islands he met both exiled Russian intellectuals and real criminals, who happened to save his life. As Dmitry Likhachyov said many years later, "At the Solovki I understood that every person is a person."

Whilst on the islands, for some period of time Dmitry Likhachyov worked as a member of the Criminological Cabinet, organizing a labor colony for teenagers and saving them from death caused by hunger, drugs and cold. From 1931, Likhachyov was a worker on the construction of the Stalin White Sea–Baltic Canal until his release.

Dmitry Likhachyovwrote his first scientific article, "Card Games of Criminals", in the camp. He didn't play cards himself, but was a keen observer. He also gathered much material about the language of thieves and later published articles and a book about thieves' slang and customs. Having returned to Leningrad (Saint Petersburg), Likhachyov worked for five years as a proofreader in the publishing house of the Academy of Sciences of the USSR. In 1936, thanks to petitions by the president of the Academy of Sciences, Aleksandr Karpinsky, Dmitry Likhachyov's criminal record was cleared. In 1938 the talented scientist was noticed[by whom?] and invited to the Department of Old Russian Literature of the Institute of Russian Literature (known as the Pushkin House). Dmitry Likhachyov worked here until the end of his life.

Old Russian literature, which at that time did not receive much academic attention, became the main scientific interest of Dmitry Likhachyov who, by the beginning of the 1940s, was one of the most renowned specialists in this sphere. In 1941 Likhachyov presented his thesis "The Novgorod Annalistic Corpus of the 12th Century".

World War II brought new trials. Likhachyov, together with his wife and twin daughters, survived the horrors of the siege of Leningrad (1941-1944). He described his experience in a story, full of harsh details, exposing different types of people and their heroic or appalling behavior when faced with starvation and death. In 1942, completely exhausted by hunger and cold, Dmitry Likhachyov started to gather materials on medieval poetry and soon published the book Defense of the Old Russian Cities. In 1943 Likhachyov and his entire family were exiled to Kazan, supposedly because of the "connection with the Solovetsky Camp". But by the end of the war they had returned to Leningrad.

In 1947 Dmitry Likhachyov received his Doctorate in Philology, having presented his thesis "Essays on the History of Annalistic Literary Forms of the 11th–16th Centuries". Three years later he became a professor at the Leningrad State University. From 1953 he was a corresponding member - and from 1970 a member of the Academy of Sciences of the USSR. Dmitry Likhachyov's conquest of the scientific world was definitely a triumphant one.

1950 marked the publication of Likhachyov’s two-volume edition containing unique, important literary works translated into the modern Russian language: The Primary Chronicle, a history of Kievan Rus' from the 9th to the 12th centuries, and The Lay of the Host of Igor, an account based on a failed raid by Prince Igor Svyatoslavich of Novgorod-Seversk against the Cumans in 1185.

Dmitry Likhachyov was not a scientist detached from everyday life. From the 1950s he began a campaign to save the wooden temples of the Russian North and to preserve the historical appearance of Russian cities. He helped found the museums of Dostoevsky, Pushkin and Pasternak. In the 1960s Likhachyov was one of the initiators of the movement for the protection of historical monuments, libraries and archives. Thanks to Likhachyov many monuments were saved, including Marina Tsvetaeva's flat in Moscow, the Nevsky Prospect in Leningrad (which was supposed to be turned into a shopping street) and Aleksandr's Garden. In the 1980s he headed the Soviet (later renamed Russian) Cultural Fund, supporting the process of the Orthodox Church's reclaiming of its temples, formerly appropriated by the Soviet government. The scientist also participated in the preservation of national minorities in danger of dying out while aiding the return to Russia of émigré public and cultural figures.

In 1980 Likhachyov was one of the members of the Academy of Sciences who refused to sign a letter requesting the expulsion the famous scientist Andrei Sakharov from the Academy because of Sakharov's public disapproval of the dispatch of Soviet troops to Afghanistan in 1979.

Despite his busy social life, Likhachyov still spent a lot of time on scientific work. Focusing on Old Russian literature, he developed the concept of artistic time and space. In 1969 the researcher was awarded with the USSR State Prize for his work "Poetics of Old Russian Literature".[citation needed]

Dmitry Likhachyov gained world-wide recognition as a theorist of culture and as a publicist. In the 1980s he developed a concept that considered the problems of humanization and the reorientation of educational goals and ideas. The scientist viewed culture as a historical memory, as a process of accumulation, rather than consecutive changes. This was also the theoretical basis for Likhachyov’s attention to ancient monuments, especially in architecture. Inspired by the works of Vladimir Vernadsky, Dmitry Likhachyov suggested the idea of a “homosphere”- a human sphere of the Earth. His original contribution to general science was also the development of a new discipline called the ecology of culture, which was defined as an essential sphere of human life.

One of the ideas of Likhachyov's concept was the correlation between culture and nature. In his book Poetics of the Gardens (1982), park and garden art was for the first time considered as a semiotic reflection of major cultural and artistic styles and their corresponding ideologies.

In Moscow and St. Petersburg, in 1986 he created the International Association of intellectuals and creative "Myr Culture", with the writer Nicolaj Sanvelian, the Italian economist and writer Giancarlo Pallavicini and other leading writers, artists and scientists, he was inspiring and President for many years [1]

Likhachyov thought about his life journey as a vertical movement, towards the heavenly home. The reflections of his experience as a person are written in the book “Reminiscences” (1995).

During the first visit to Rome Gorbachev, Myr Culture has officially handed over, on behalf of the intellectual-creative in the world, a cultural program, called "Manifesto of the three" by the signatories founders of the association, the Russian spokesman Zagladin presented the world's press at the Foro Italico, in 1998, as an instance of cultural freedom for Russia and for the world, signed by Dmitry Likhachov, Nicolaj Sanvelian e Giancarlo Pallavicini [2]

The last works by Dmitry Likhachyov gathered together his general ideas about his native country. The book Thoughts About Russia, completed in 1999, a few days before the author's death, is devoted to Russia'’s place in world history, its myths and its most characteristic features. The edition Russian Culture was published posthumously in 2000.

As a great scientist, Likhachyov was a foreign member of the Academies of Sciences of Bulgaria, Hungary and Serbia and a corresponding member of the Austrian, American, British, Italian and Göttingen Academies. In 1984 the minor planet 2877 was named after Likhachyov.

Likhachyov graduated in 1928 from the Leningrad University. In the same year, he was arrested for his speech deploring the "Bolshevik" reform of Russian orthography. Deported to the Solovki Special Purpose Camp, he spent 5 years studying "criminal folklore" (as he termed it). Likhachyov returned to Leningrad unbroken, and started his spectacular scholarly career in the Pushkin House (as the Russian Literature Institute is known), which spanned more than 60 years and saw the publication of more than 500 scholarly works. Likhachov didn't stop his work even during the Siege of Leningrad. He believed that Russia was an integral and indivisible part of European civilization, contrary to "Euroasiatic" views of Russia popular with Lev Gumilev, Boris Rybakov, and many other contemporaries.

In 1953 Likhachov was admitted into the Soviet Academy of Sciences as a Corresponding Member. He defended Andrei Sakharov, Aleksandr Solzhenitsyn and other dissidents during their persecution by Soviet authorities. In 1986 he was elected the first President of the Russian Cultural Fund. In his 1980s and 1990s, he became more of a public figure, serving as an informal advisor to St. Petersburg Mayor Anatoly Sobchak and Russian President Boris Yeltsin. In October 1993 he signed the Letter of Forty-Two.[3] In the same year, he became the first person to be named an Honorary Citizen of St Petersburg. He also presided over the commission set up to prepare for Alexander Pushkin's bicentenary. A year before his death, Likhachov became the very first recipient of the reinstated Order of St. Andrew. In 2001 Likhachyov's daughter and George Soros established the Likhachov Philanthropic Fund.

Likhachov married Zinaida Makarova, who devoted her entire life to her husband. They had twin daughters, Vera and Lyudmila.

A minor planet 2877 Likhachev discovered in 1969 by Soviet astronomer Lyudmila Chernykh is named after him.[4] 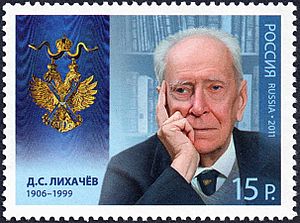 Dmitry Likhachov on a 2011 Russian stamp